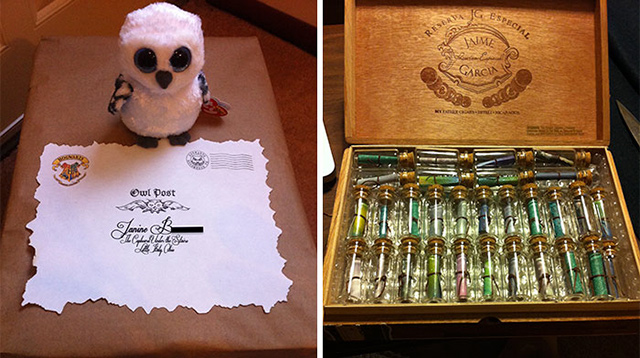 Meet Matt Brocone, a loving husband, and a hardcore Harry Potter fan. Recently he expressed both by making his wife the most awesome wedding present any Wizarding World fan can receive.

He has made for her a very own Pensieve. For those who aren’t familiar with the concept, Matt explains: “Pensieve is a bowl used to view memories. Dumbledore would use his wand to pull memories from his head and store those memories in bottles. When he’d want to see a particular memory, he’d pour the bottle into the bowl to view it.“

Sounds simple? Well, you might change your mind when you see how much planning went into it… 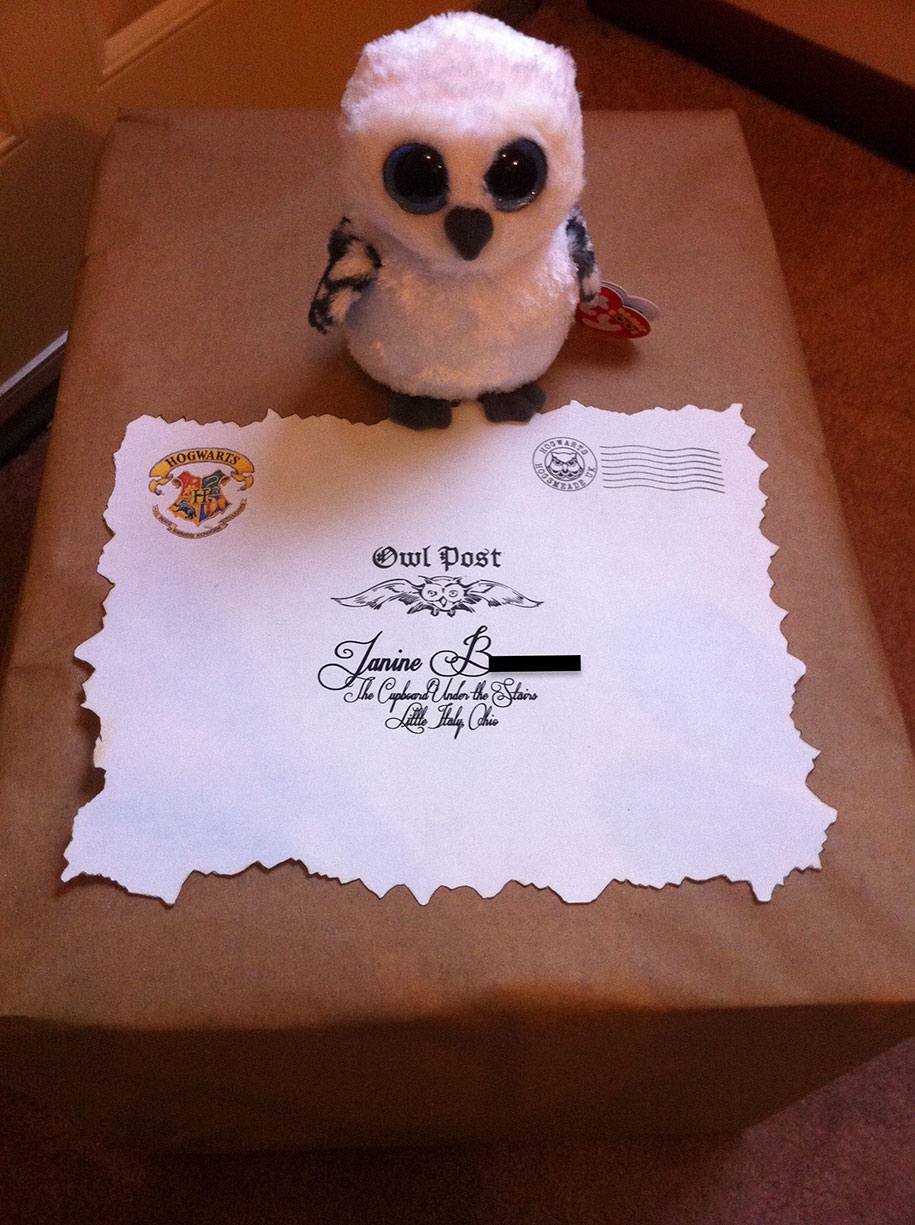 The package letter I did in powerpoint. I found the Hogwarts stamps from a simple Google search. The calligraphy was just a text box. After printing it up, I burned the borders of the paper.

Gift 1: Her very own magic wand! 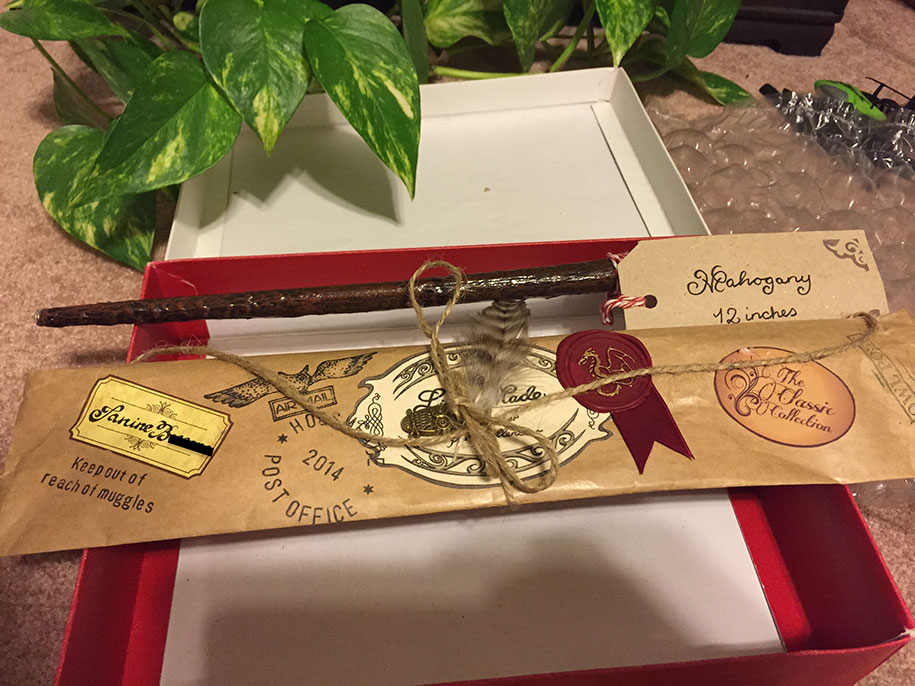 The wand I bought from Etsy and personalized with her name. Not seen well in the pictures is a small neodymium magnet that I glued to the tip. 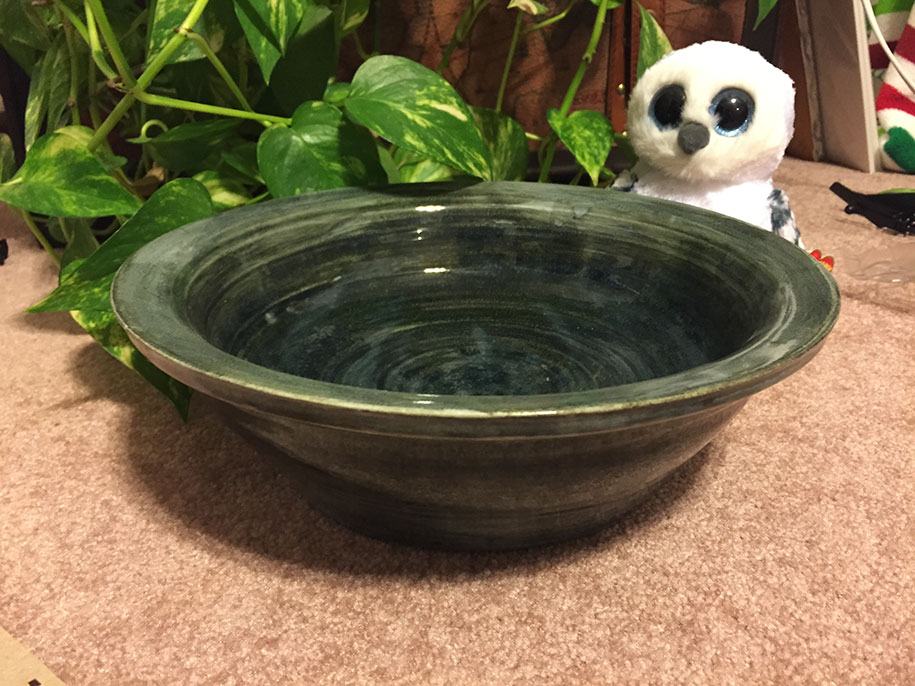 The bowl was a bit of work. I took pottery making classes (which I would recommend anyone do just for kicks, it was super fun), and it took 4 lessons of 2 hours each to make, paint, and glaze.

The bottom of the bowl 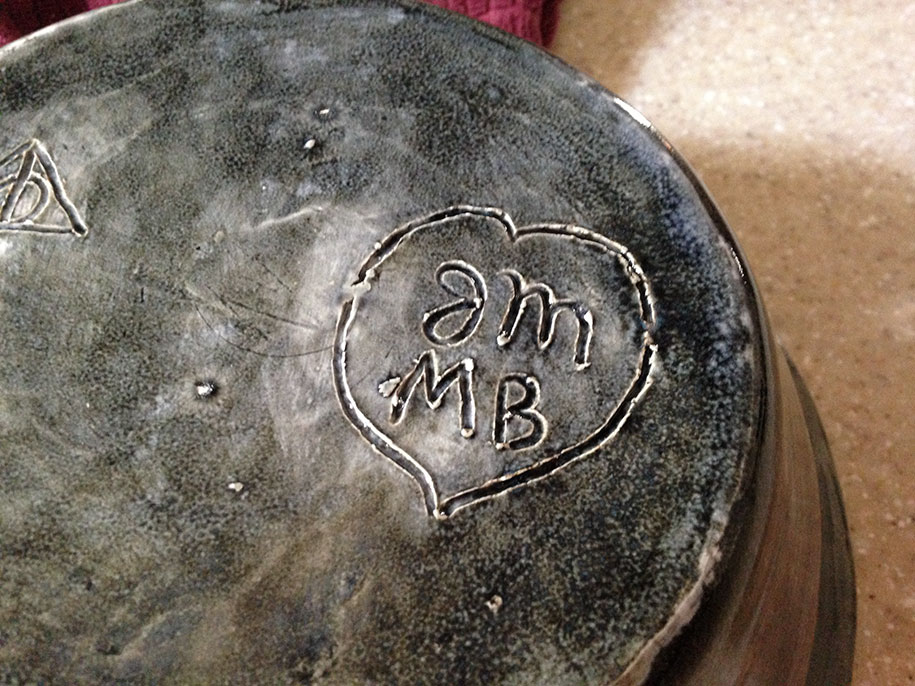 Gift 3: Bottles filled with memories of her that make me smile 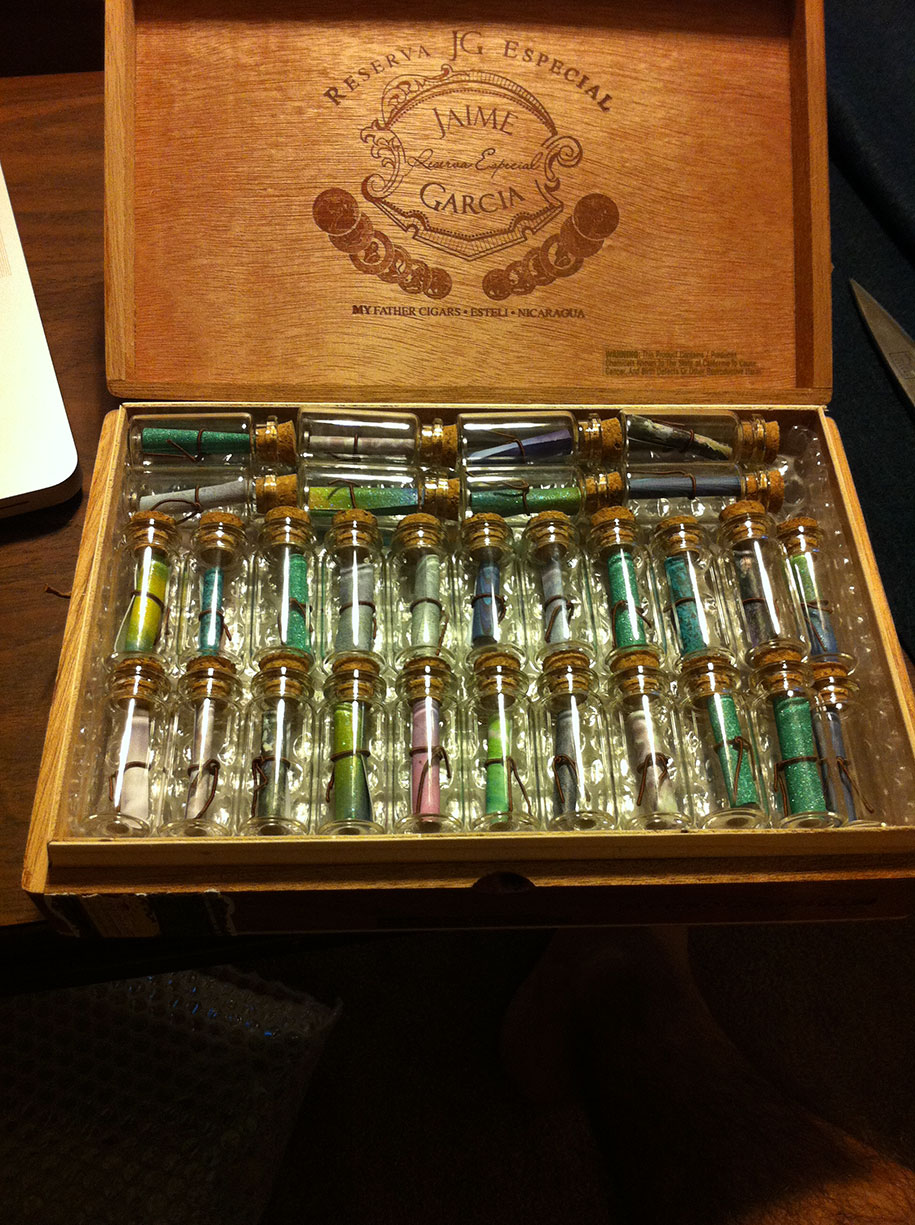 The miniature corked bottles were also found on Etsy. I went through a few different sizes before I found some that worked since the opening had to be big enough to easily get the scroll in/out (about 5 x 2cm with a 1cm opening).

Put them all together, and you’ve got a Pensieve! 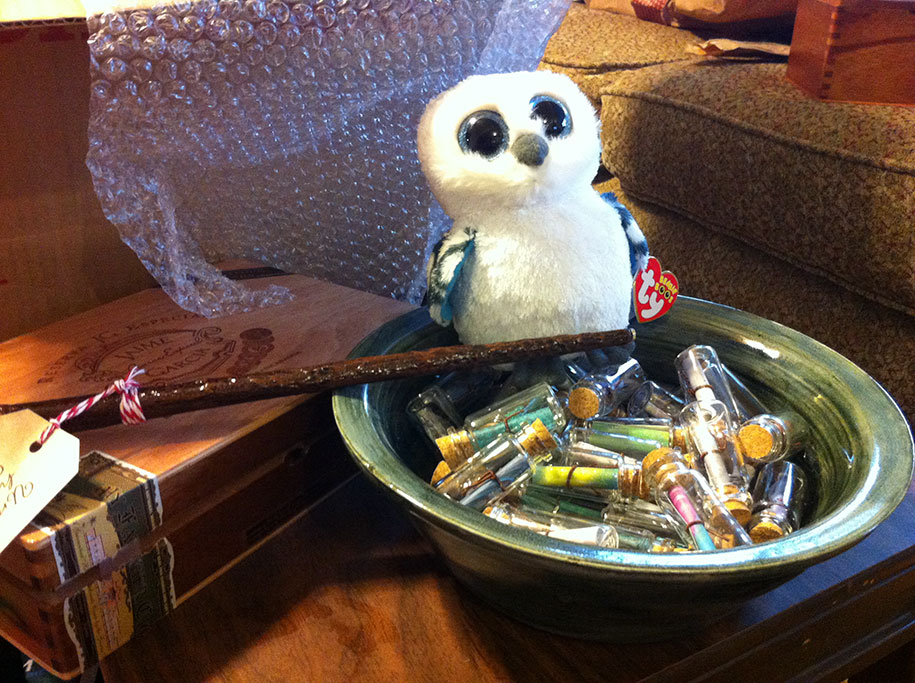 For the memories, I went to a local craft store and they had all kinds of cool sparkly paper. I cut them up to fit into the bottle, and drew the memories and rolled them up.

So, when she wants a memory, she just puts the wand in the bowl… 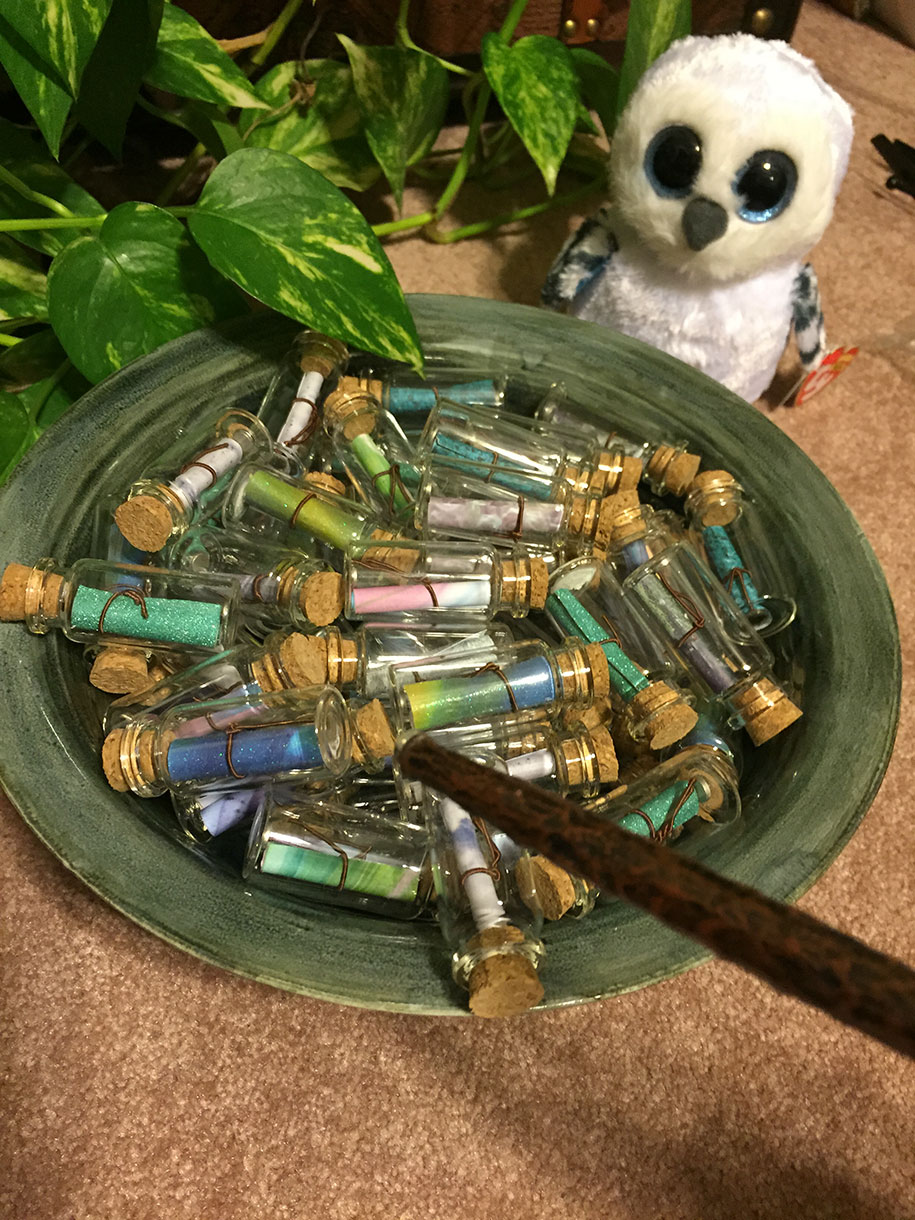 To hold the memories rolled up, I used a wire I found at the same craft store. It was basically like a circular twisty-tie. I tried using twine and string, and neither worked as well as the wire.

And pulls the memory out! 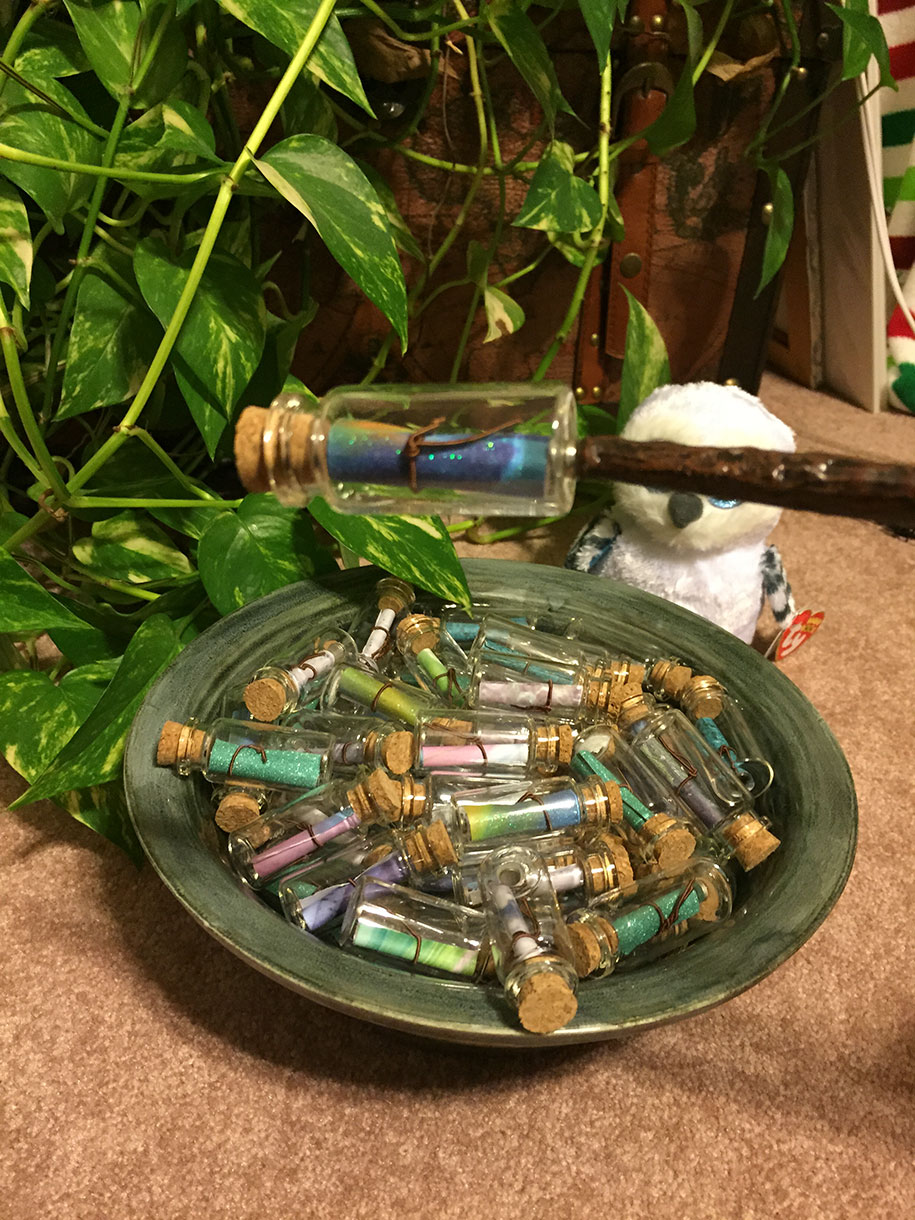 Open the memory, and smile! 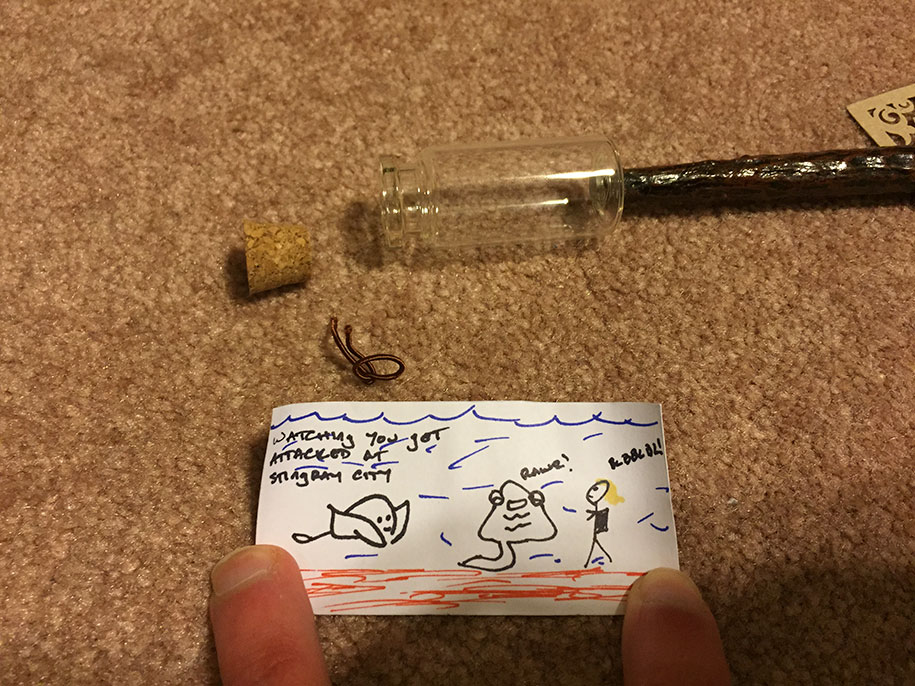 This memory may sound callous, but getting attacked at Stingray City is kind of the point. They give you squid to hold onto to attract the rays so they swarm you. It’s in Grand Cayman and super fun. 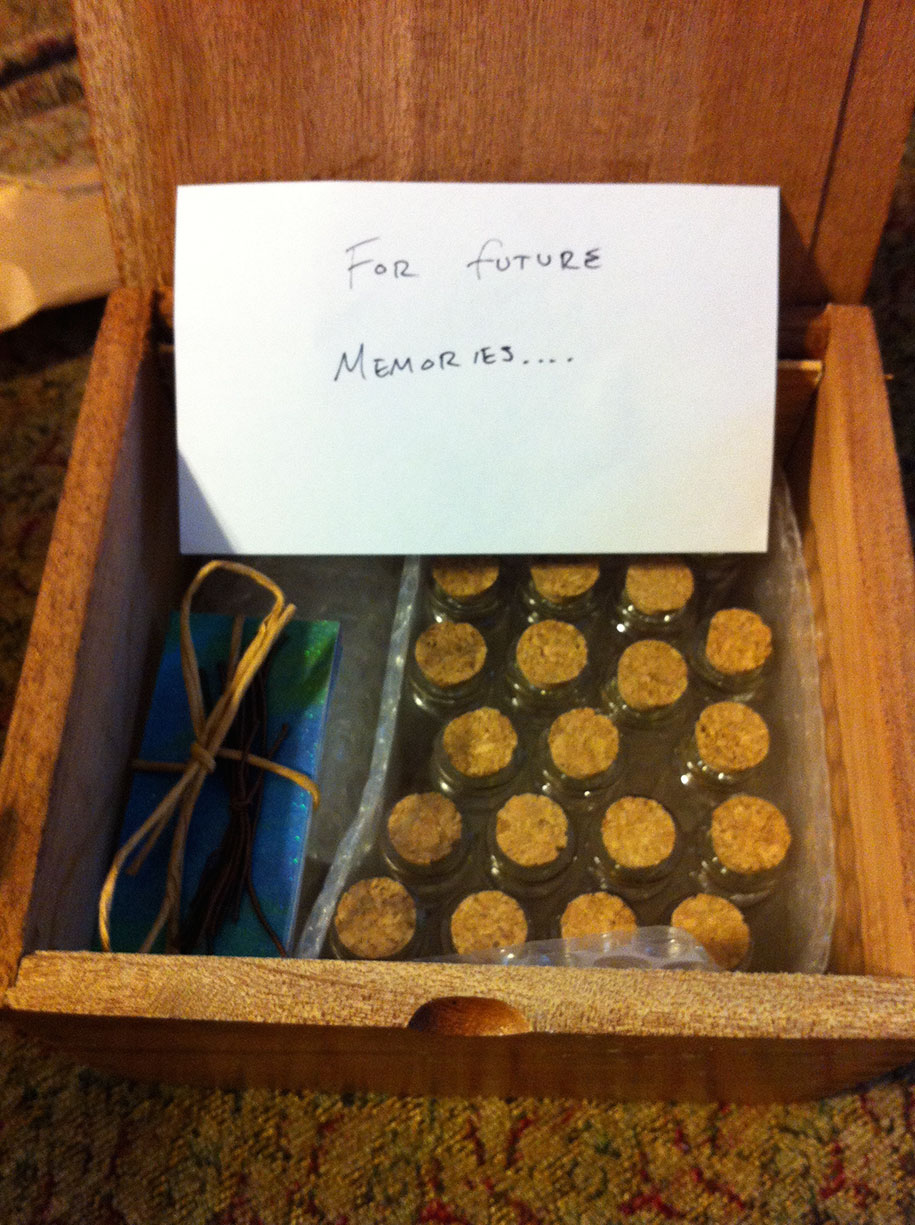 The wooden boxes holding everything were actually cigar boxes. I don’t smoke (and neither should you), but went to a cigar store and they had plenty of boxes they wanted to get rid of.

I hope the amortentia potion I gave her never wears off