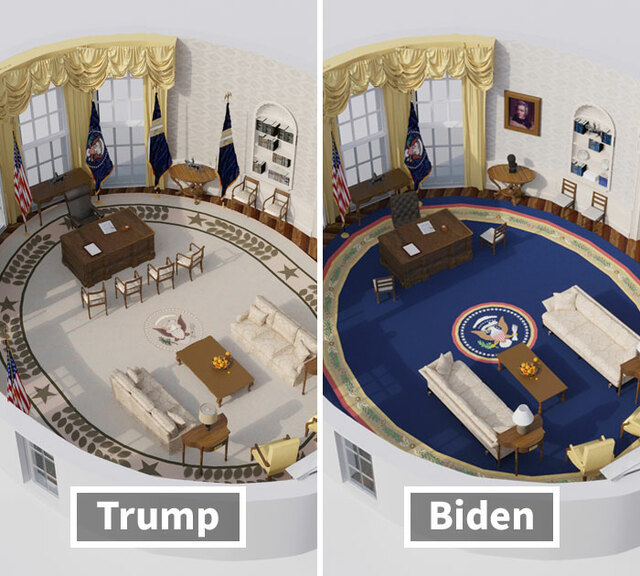 The Oval Office has to be one of the most important rooms in all of White House – after all, it’s where the U.S. presidents spend a great chunk of their presidency taking care of important business. And since the presidents tend to spend so much time there, each one gets to redecorate it in their own way in the beginning of their term. However, it’s not like they can just hang posters of their favorite movie actors or cool cars the walls. The changes usually involve changing the color of the drapes, the wallpaper, and the carpet – and sometimes they’re are so subtle, you hardly even notice them.

Recently, American Home Shield shared 20 recreations of the Oval Office to show just much each U.S. president changed its design over the past 100 years, and it’s pretty interesting to see how each one of them added their own personal touch. Check them out in the gallery below! 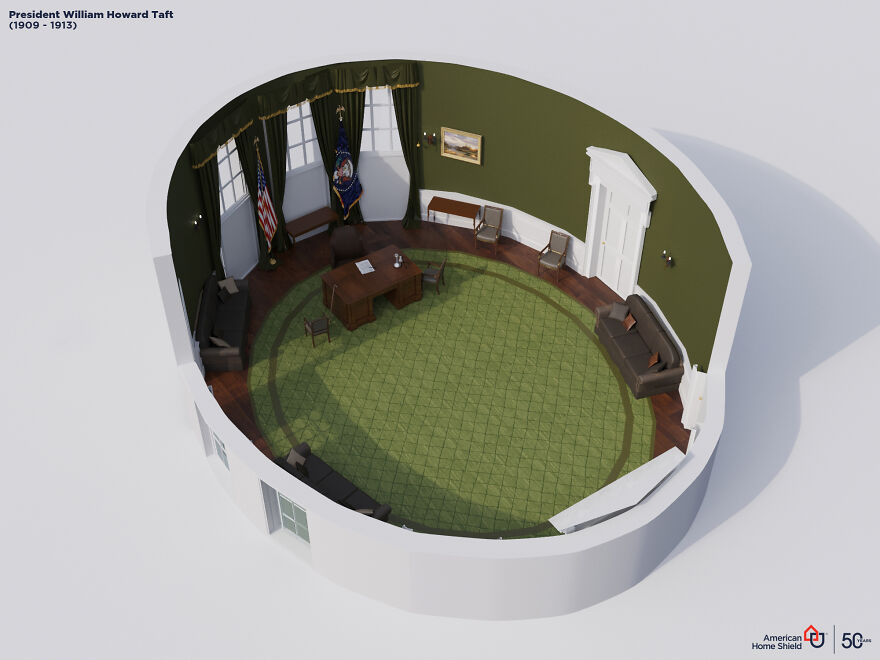 Taft made the decision to move the executive office from the Roosevelt Room to the room of the president’s secretary (now known as the Chief of Staff) during his expansion of the West Wing. The office had previously been rounded at just one end, but Taft had it remodeled to a more democratic oval shape. 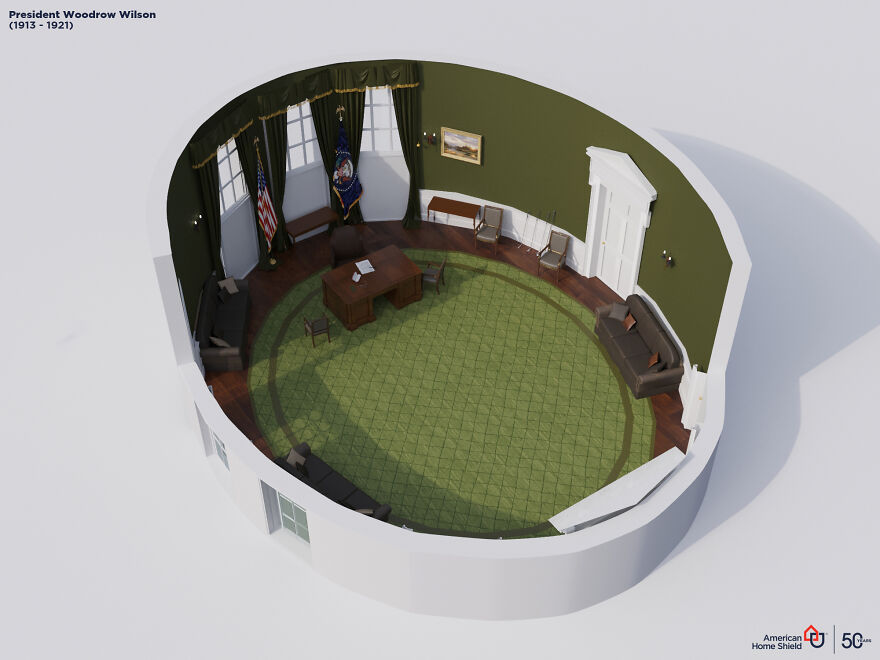 Following a period of reinvention in the West Wing, Taft’s immediate successors made only minor changes to the new Oval Office. President Wilson preferred to work in the Treaty Room (which would later become Obama’s “man-cave”), missing out on Oval Office features such as silk velvet curtains and mahagua wood floor. 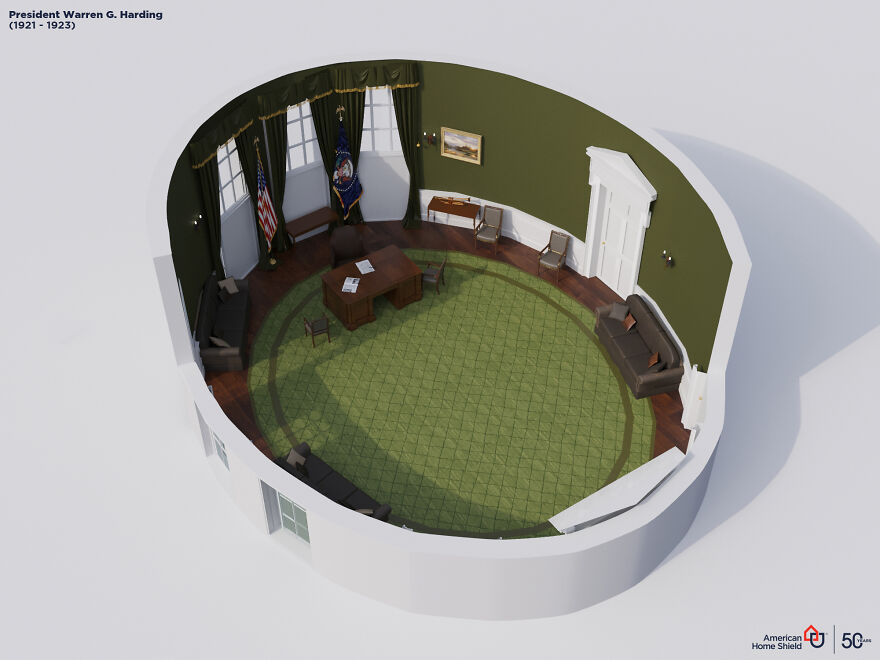 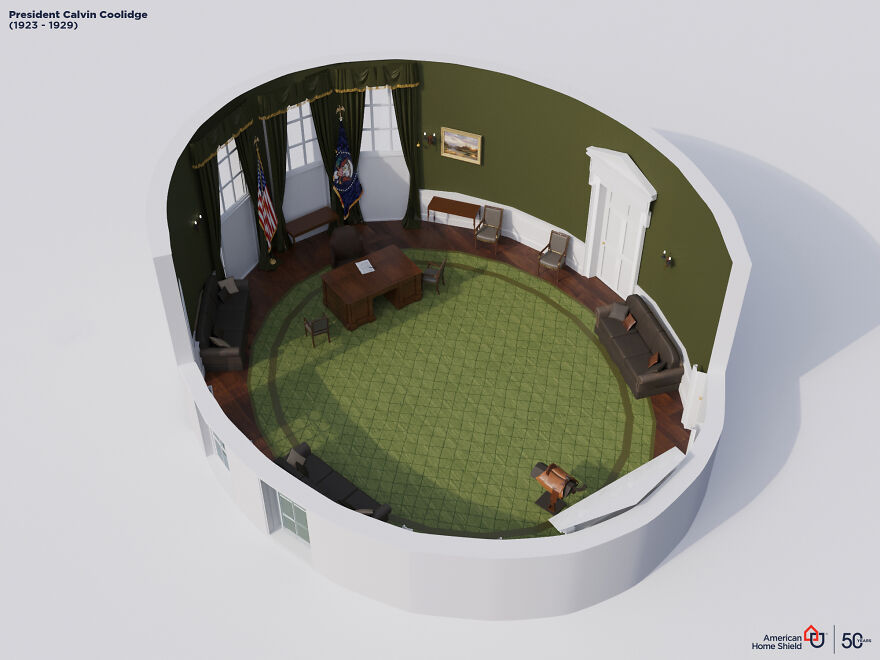 Coolidge’s Oval Office still reflects the work that designer Nathan C. Wyeth did for William Taft. A marble mantel in the neoclassical style adds gravity and authority to the scene, while the fixtures are by celebrated lighting and metalwork company E. F. Caldwell & Co. 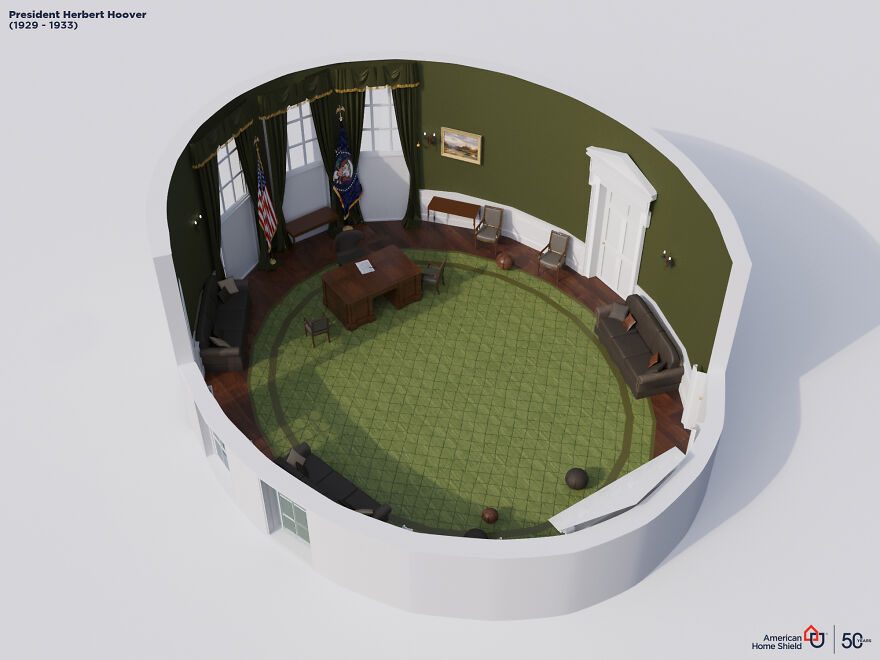 Wyeth and Taft’s Oval Office was ruined by the White House fire of Christmas Eve, 1929. Sitting President Hoover repaired and expanded the office in a colonial style, with butternut wood-paneled walls. 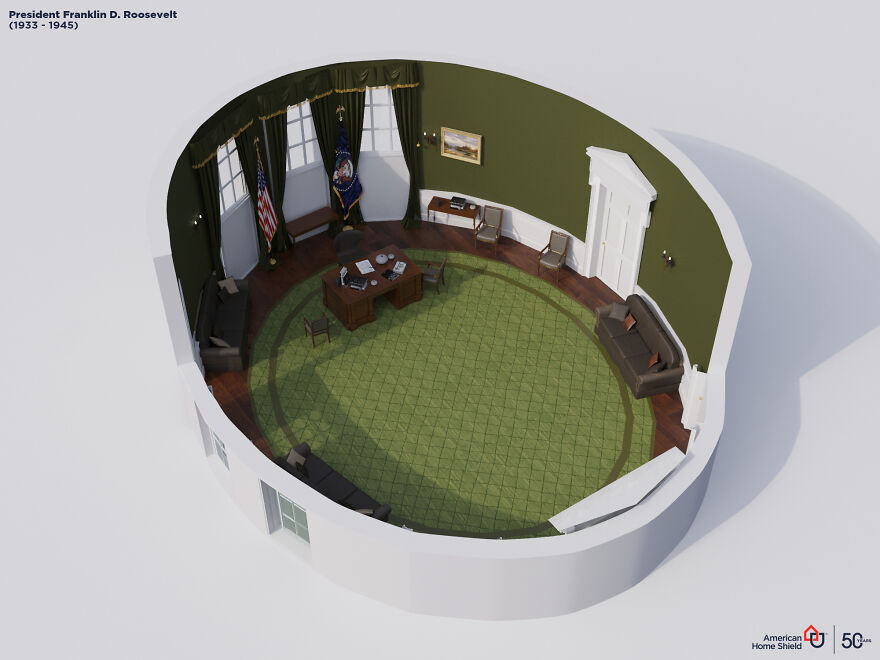 Despite Hoover’s renovations, Roosevelt soon relocated the Oval Office to the southeast corner of the West Wing, where there was better natural light. He also expanded it by two feet. However, he kept Hoover’s 17-piece suite, with which the Grand Rapids Furniture Manufacturers Association had refurnished the old Oval Office. It included a desk, “davenport, club chair, two large and one smaller wing chairs, two tables, swivel desk chair, two armchairs, two bookcases, a small table and three smoking stands of two sizes.” 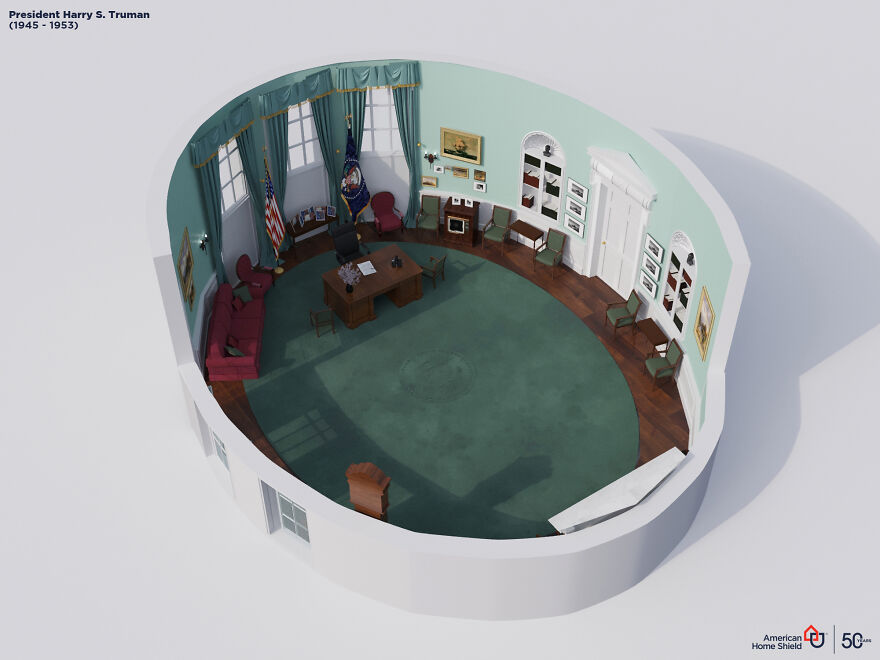 Truman was the first to have a rug with the Seal of the President. It was a continuous blue-green color, with the crest implied by cutting the pile to different lengths. The rug would not be replaced until the day that JFK was assassinated. (This was a coincidence; Jacqueline Kennedy planned for the office to be redecorated while they were away in Texas.) 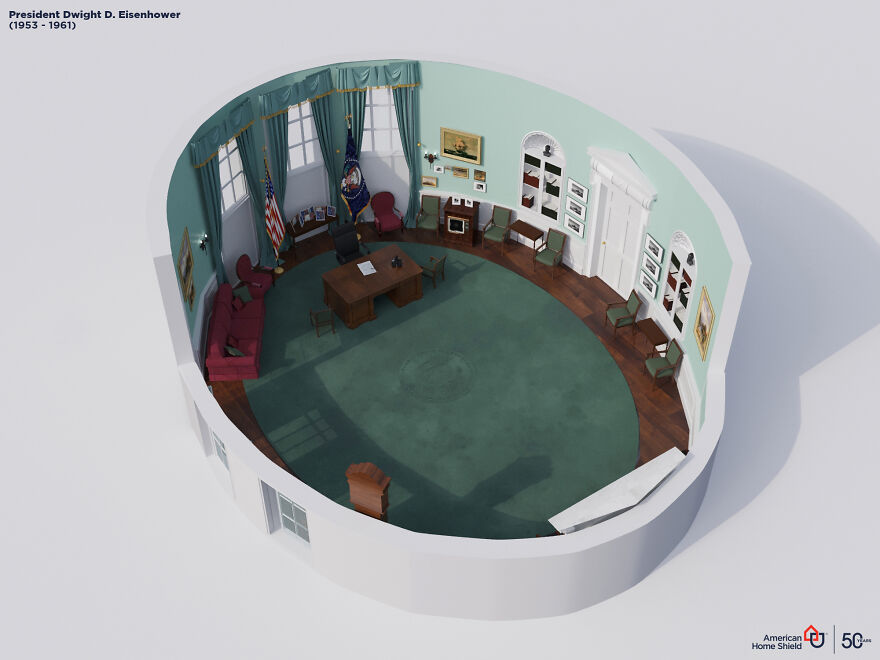 Eisenhower is one of just two presidents not to have made significant changes to the décor of the Oval Office. However, he reportedly destroyed the floor with his golf spikes, which he neglected to take off when returning from the putting green he established on the back lawn. 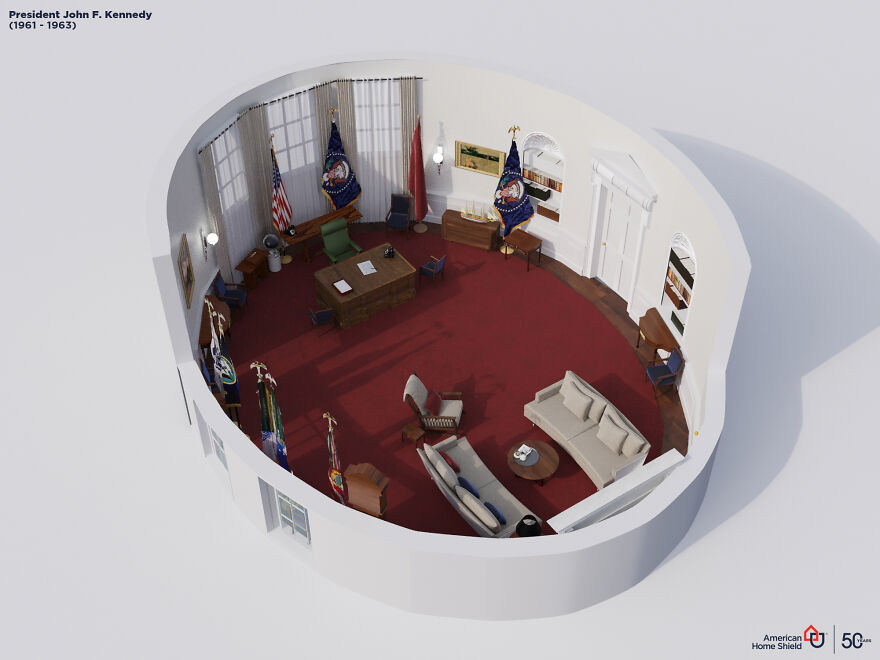 First Lady Jacqueline Kennedy invited French interior designer Stéphane Boudin to renovate and restore the White House. Boudin introduced a new red rug, white sofas, and pale curtains, but the Kennedys never got to see the finished job. Prior to the renovation, John Kennedy had personalized the space with items including a paperweight made from a coconut shell that saved his life in World War II. 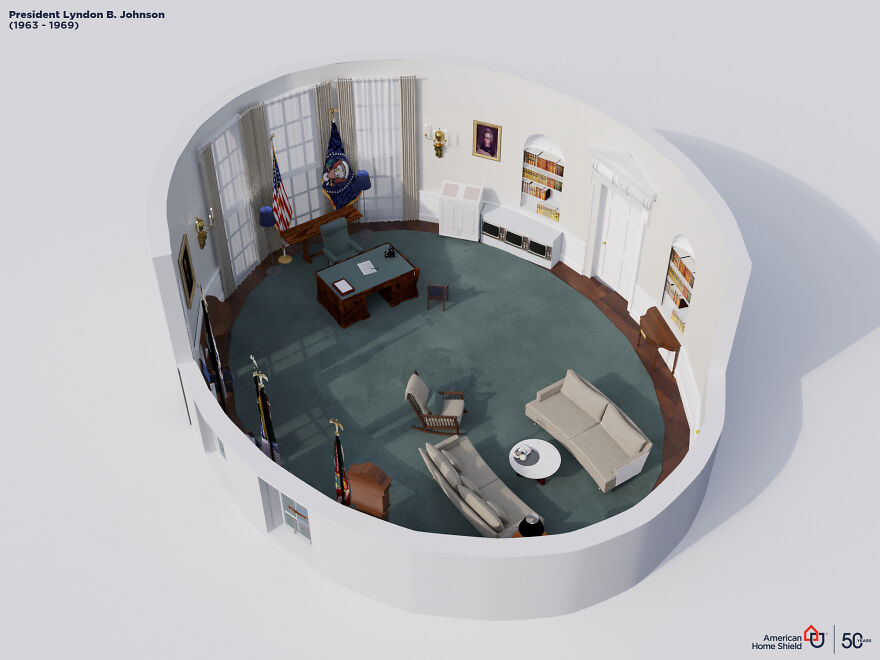 Johnson covered up Eisenhower’s spike-prints with wood-grain linoleum. He also brought the Oval Office into the media age, installing a teletype cabinet and banquette with three television sets. Johnson even had his own TV remote complete with LBJ monogram—so there was no fighting over who controlled the channels! 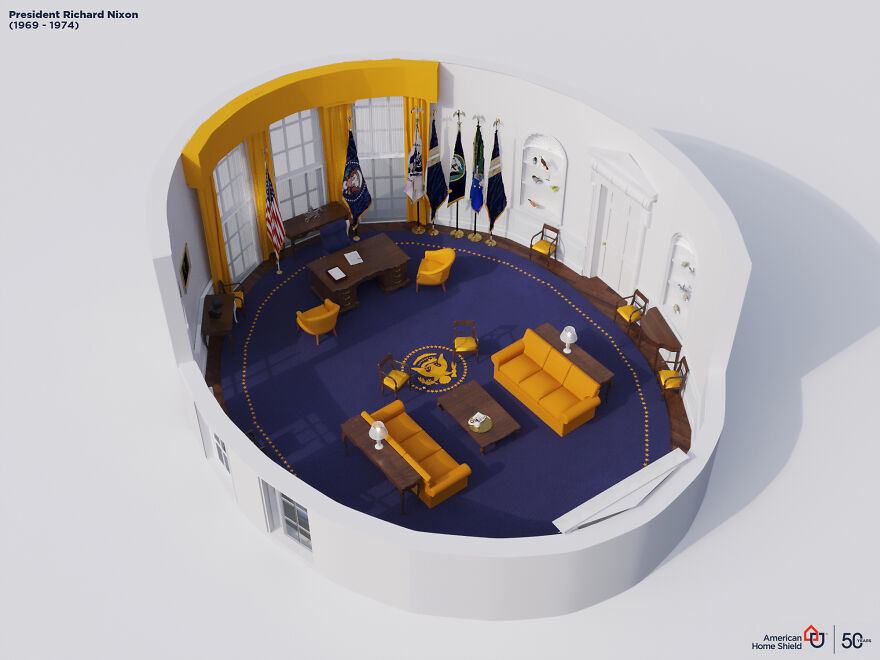 Nixon chose a bold combination of blue and gold for his Oval Office—perhaps anticipating that guests would include Elvis Presley. Nixon also brought the Wilson desk (currently used by President Biden) into the office, wrongly believing it to have belonged to his idol, Woodrow Wilson. 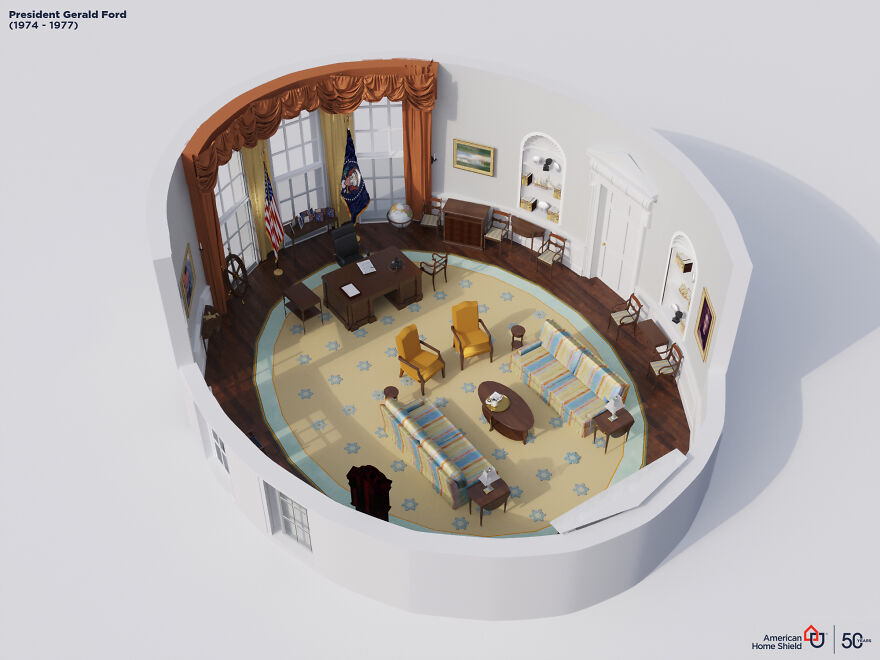 Ford dialed down Nixon’s gold and royal blue to a bright but mellow color scheme of yellow, baby blue, and terracotta. It is Ford who installed the Seymour tall case clock that remains in the Oval Office today. This mahogany timepiece was built around 1800 and is considered a “treasure” of the White House. 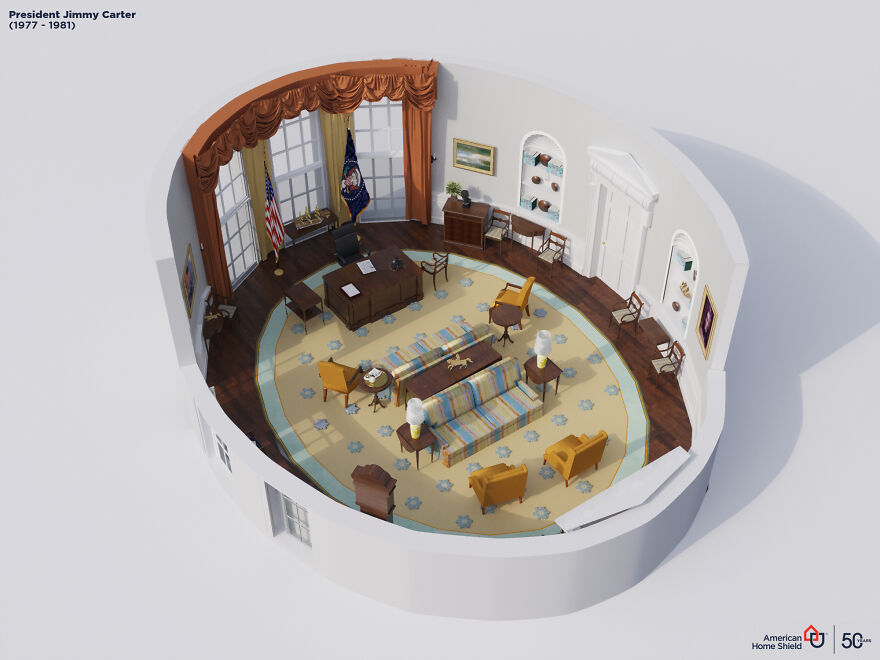 Carter kept Ford’s décor, but added some personal effects. He also brought back the famous Resolute desk first used by JFK and favored by every president since Carter, with the exception of the Bushes. 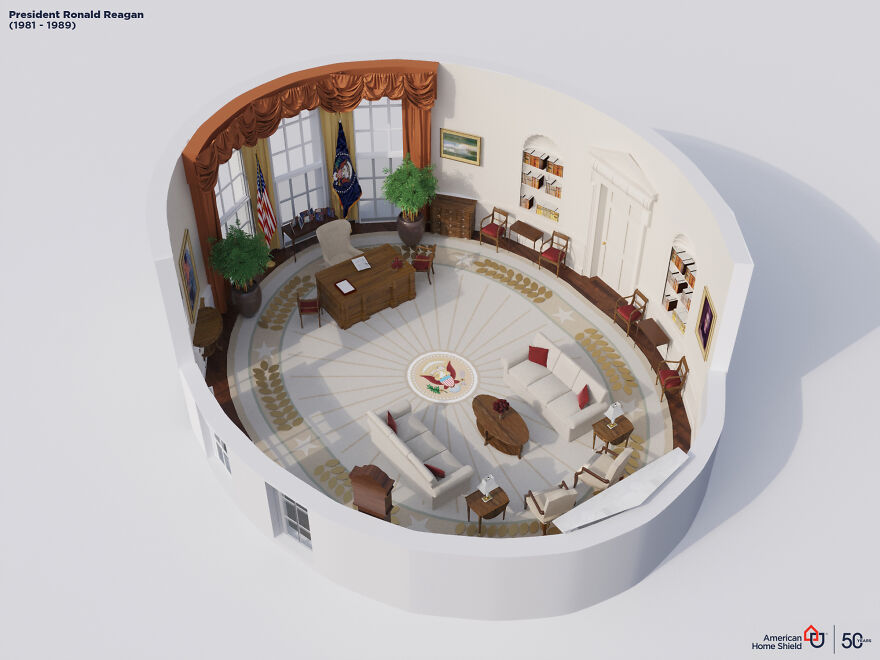 The 40th President of the United States waited for his second term before redecorating. Of note is the new rug with sunbeam design atop a new floor in walnut and quartered white oak. Reagan also had a 2” base added to the Resolute desk to fit to stop him banging his knees on the drawers. 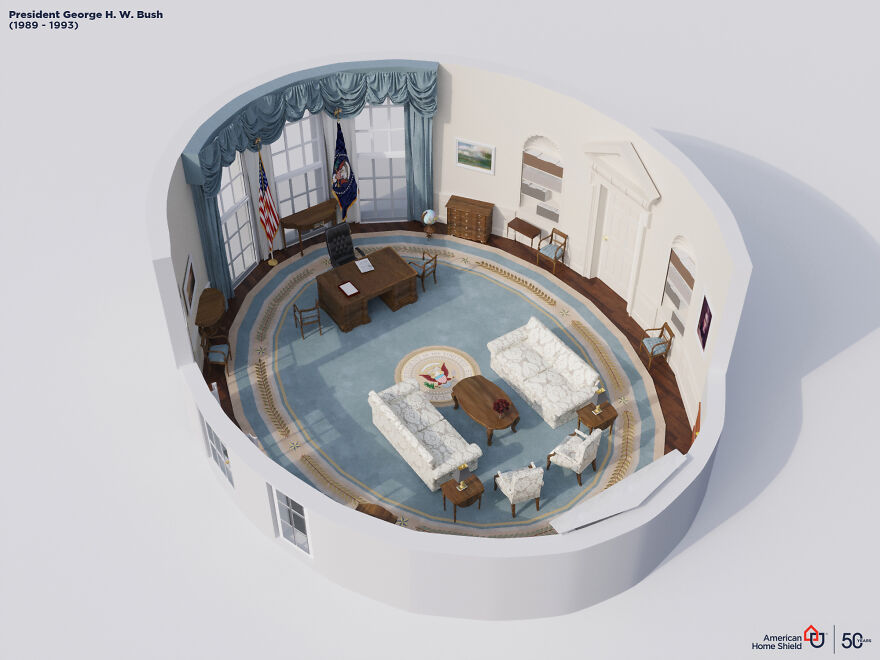 The first President Bush modernized the Oval Office with a steel blue and cream color scheme. He also displayed numerous family photographs. Bush Senior is the only president to have used the C&O desk in his Oval Office—he had grown fond of using it while serving as Reagan’s vice-president. 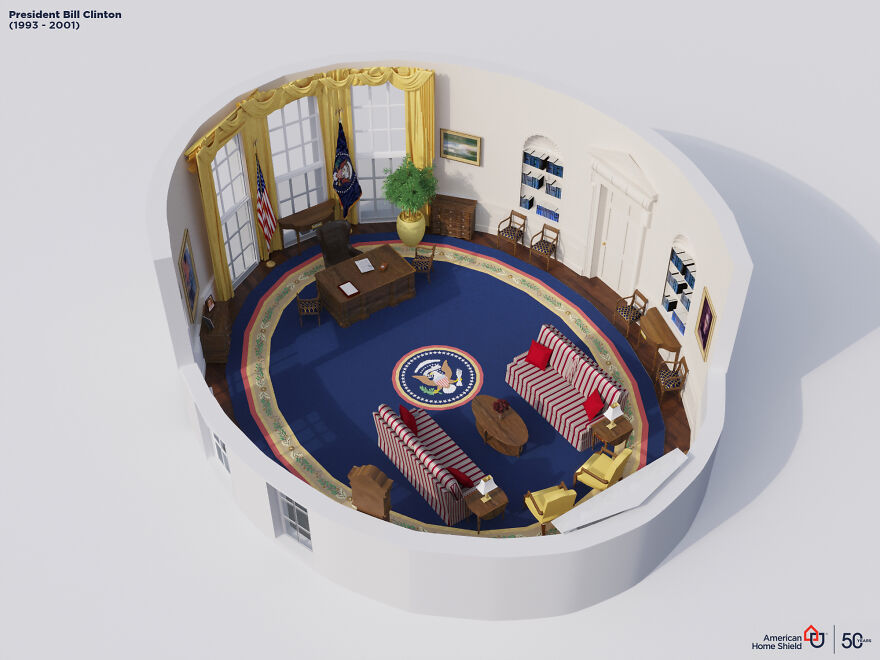 Kaki Hockersmith decorated Bill Clinton’s office in a scheme that can’t help but recall the Nixon era. Hockersmith’s eye-catching blue seal rug has recently been brought back into the Oval Office for the Biden administration. 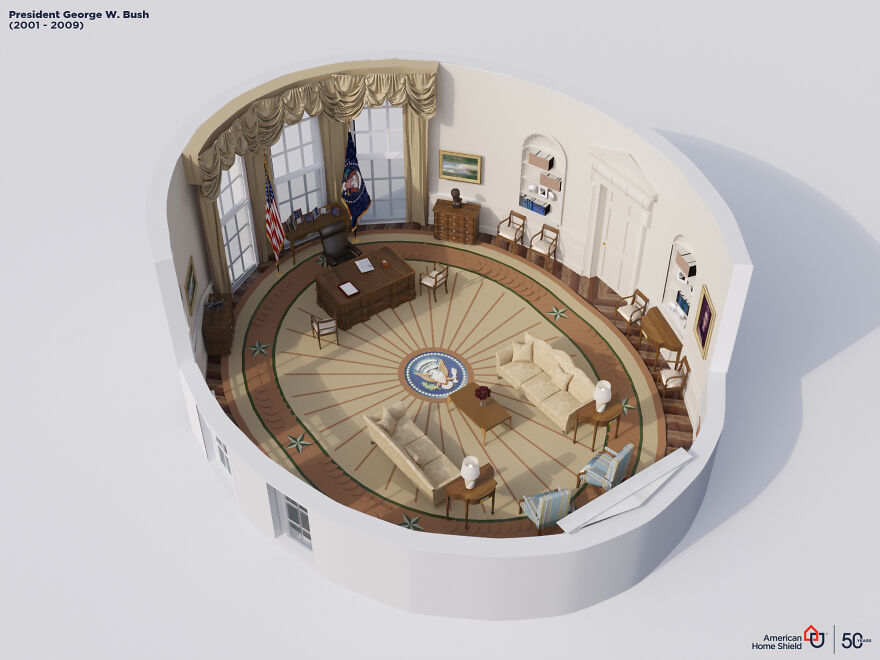 Bush Junior echoed Ronald Reagan with his choice of a sunbeam-themed rug, which designer Ken Blasingame paired with antique gold drapes. The rug itself was designed by First Lady Laura Bush, and was intended to evoke the optimism of sunrise. 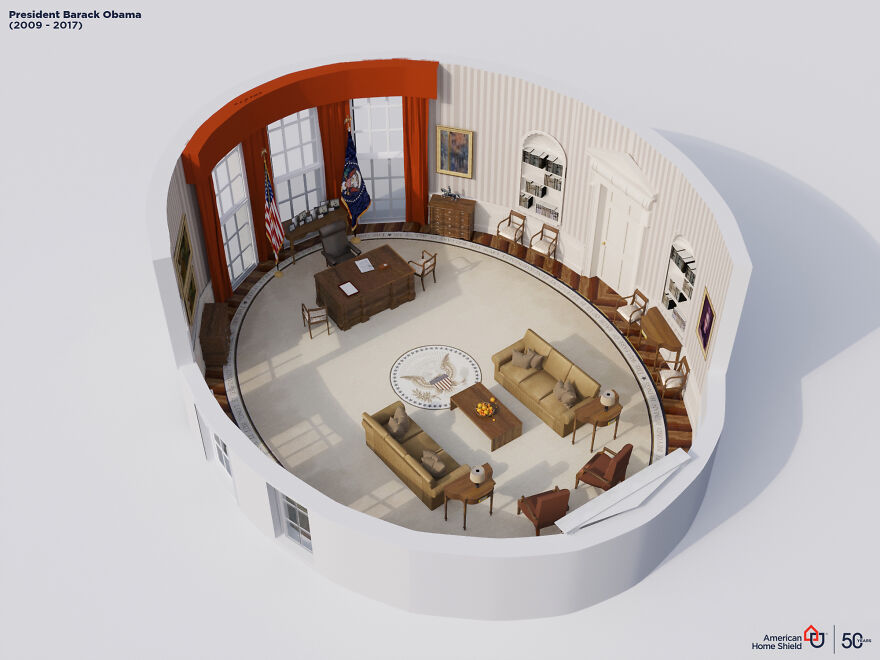 President Obama was the first to choose patterned walls, opting for golden tan and light-beige striped wallpaper. The room’s cool fawn-colored velvet sofas and neutral tones reflected the fact that Obama genuinely used the office to sit down and work. “Someone said that Bush’s looked like the kind of room you’d have tea in, and that it was very genteel, but that Obama’s looked like a place you’d have a quick espresso and get down to work,” according to Obama’s designer, Michael S. Smith. 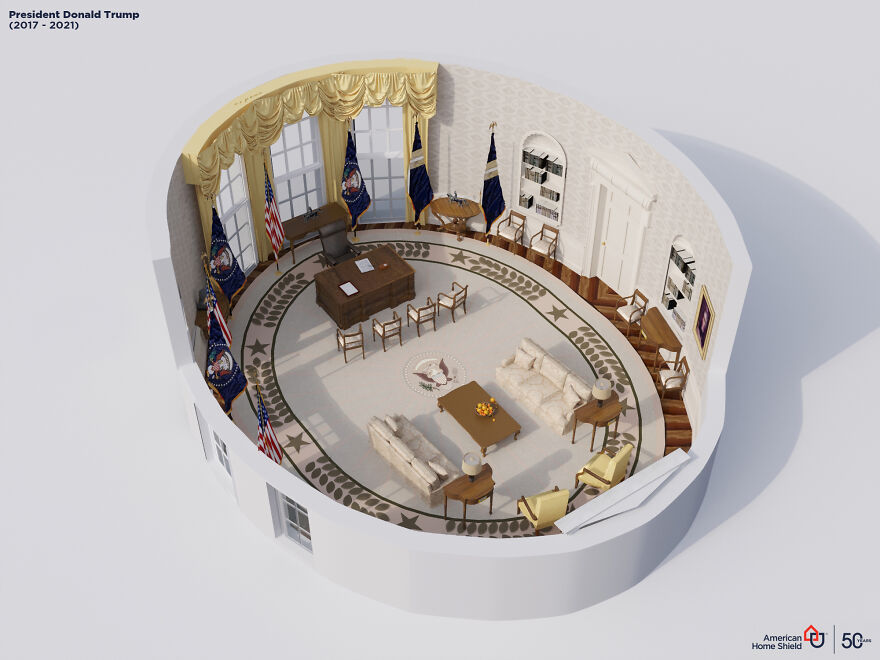 Trump’s choice of drapes turned out to be somewhat ironic. The gold curtains he found in storage were originally chosen by First Lady Hillary Clinton for husband Bill’s Oval Office. Trump also replaced Obama’s wallpaper, opting for a motif of sea scrolls, leaves, and floral medallions, intended to evoke the building’s sense of history. 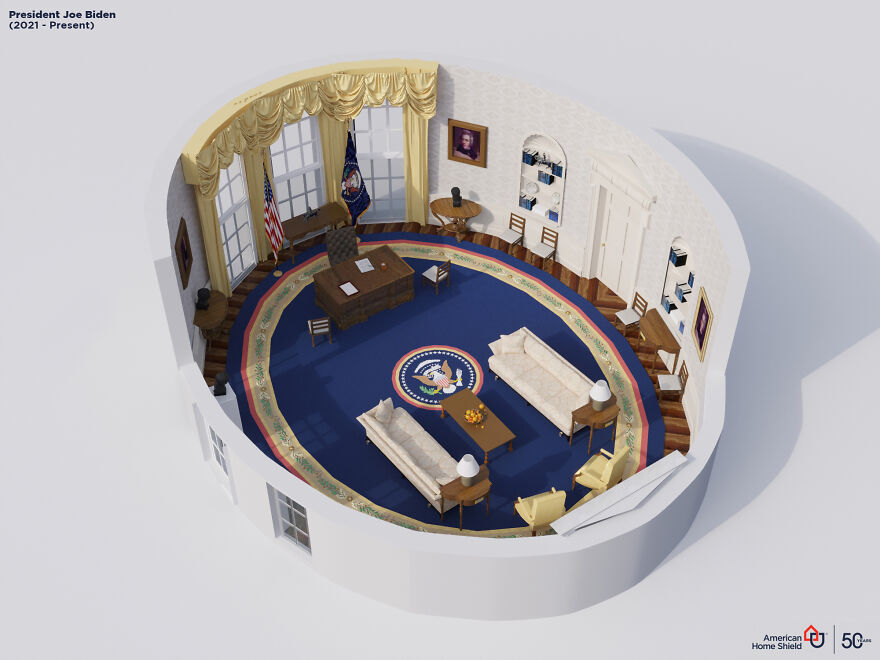 President Biden opted to keep the Clinton drapes in the windows and has brought back Clinton’s navy rug, too. New additions include a 3.9-billion-year-old moon rock.