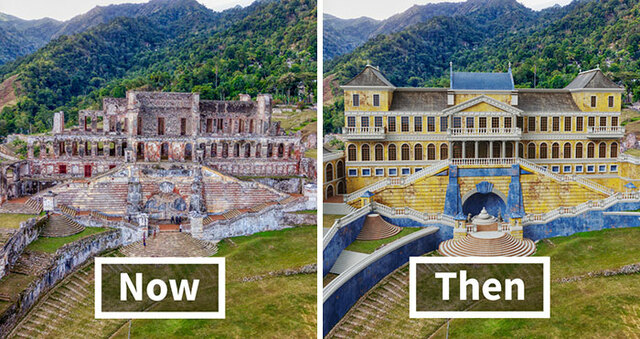 As sad as it may sound, a lot of historical palaces did not stand the test of time, and were either completely destroyed or reduced to almost nothing but rubble. And even though we can’t travel back in time to visit these places while they were still up, thanks to talented 3D designers we can at least see how they looked in their heyday.

Recently, Australian insurance brand Budget Direct teamed up with talented 3D artists to recreate 7 majestic historical palaces, giving us a unique glimpse at the way they looked in their prime. See the recreations and their detailed descriptions in the gallery below, and if you want more, check out Budget Direct‘s earlier recreations here and here! 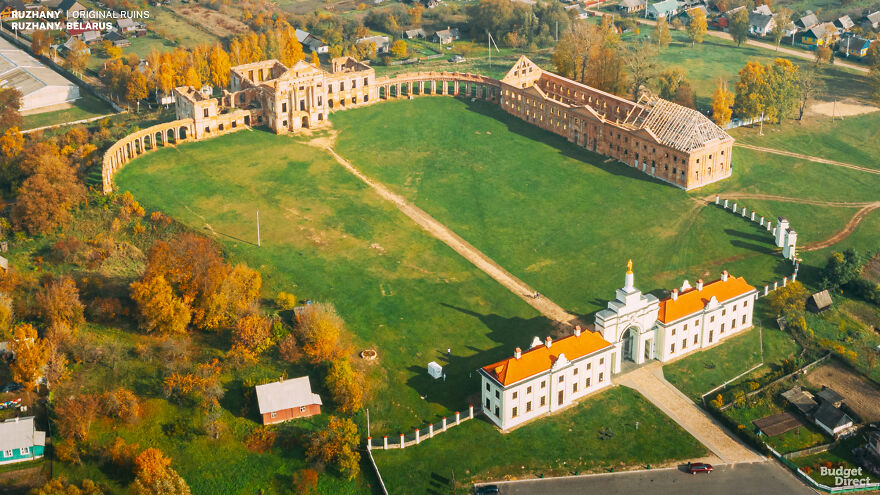 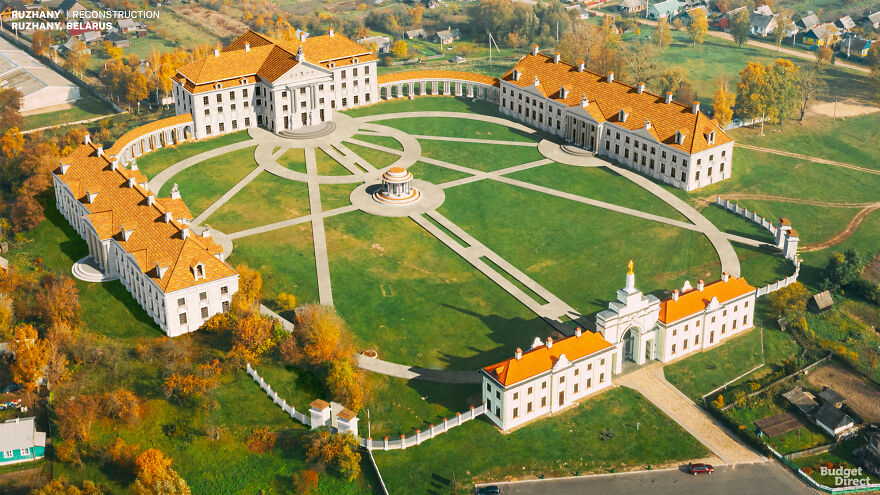 “The Sapieha family—power-brokers of the Polish-Lithuanian Commonwealth—built Ruzhany Palace in the late 1700s over the site of their earlier castle. In its heyday, Ruzhany’s famed theatre employed 100 performers. The palace also possessed a famous library and picture collection.

In 1831, the palace was leased to the Pines family as a textile factory, bringing wealth to the local Jewish community. Ruzhany’s palace, the Jewish community, and political independence all came to a violent end during World War II. Today, the region is controlled by Belarus, which has begun restoring Ruzhany to its former glory.” 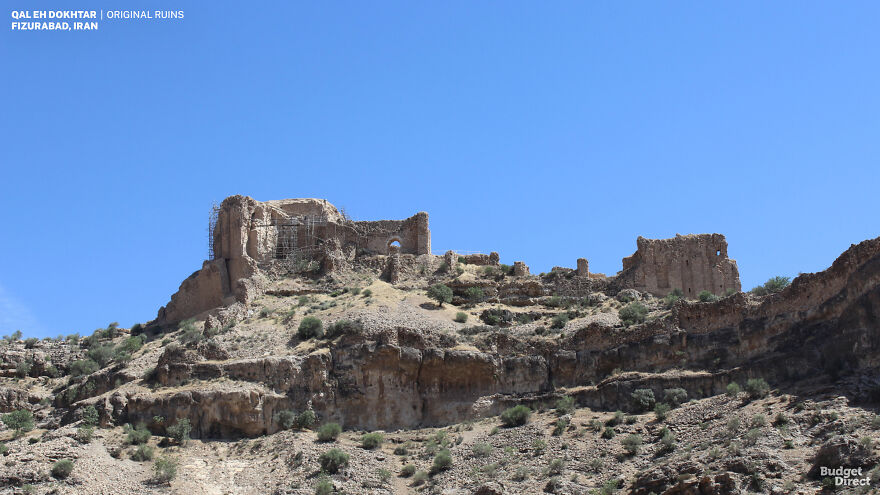 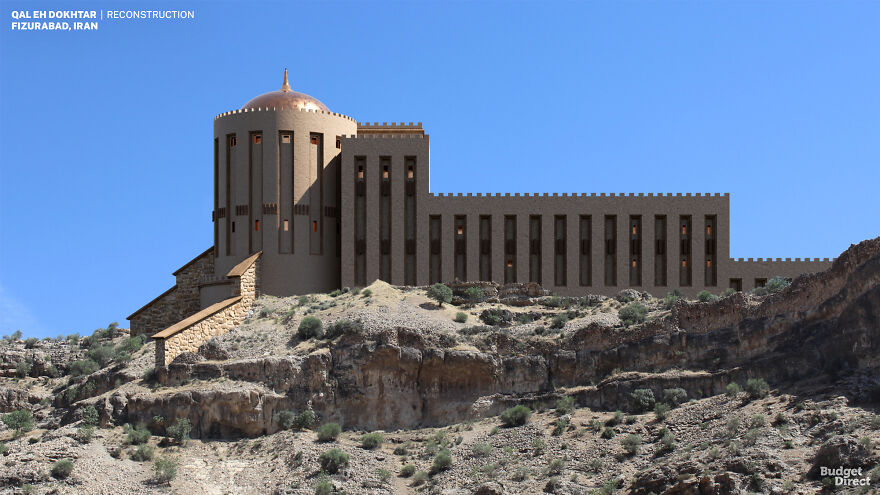 “Ardašīr built Qal’eh Dokhar I as a “barrier fortress” during his 3rd century founding of the Sasanian Empire in Iran. The fortress’s third floor housed his royal residence but was eventually supplanted by a greater palace he built nearby.

Because it is fortified, Qal’eh Dokhtar is technically a castle, not a palace. However, in the face of its stunning walls, who would quibble over labels? Qal’eh Dokhtar boasts perhaps the earliest example of an Iranian chartaq—a square of four arches supporting a dome—which became an important feature of traditional Iranian architecture.” 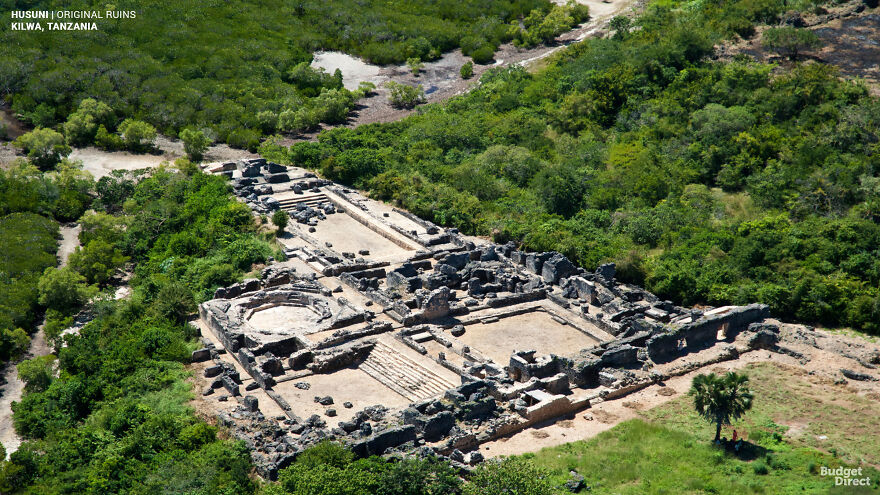 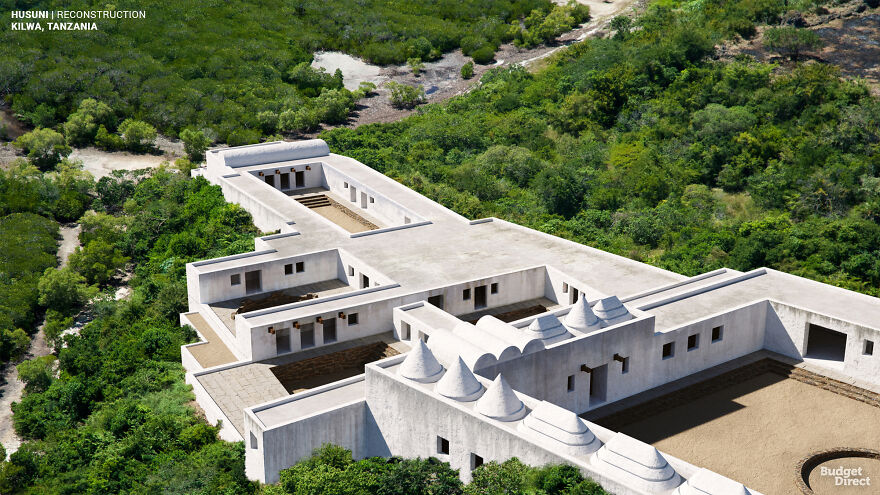 “The island of Kilwa Kisiwani was one of the most important sultanates in the “Swahili Coast” trade network, linking East Africa to the Arabic world. For over 300 years, gold and ivory passed out of its ports, while Chinese silk and porcelain flowed in. The 14th-century palace at Husuni Kubwa is just one of many coral stone ruins that dot the island.

Husuni Kubwa was built by Sultan al-Hasan ibn Sulaiman. It had over 100 rooms, an octagonal swimming pool, and a staging area for loading goods onto ships. Husuni Kubwa, along with other elite Kilwa dwellings, was also equipped with indoor plumbing.” 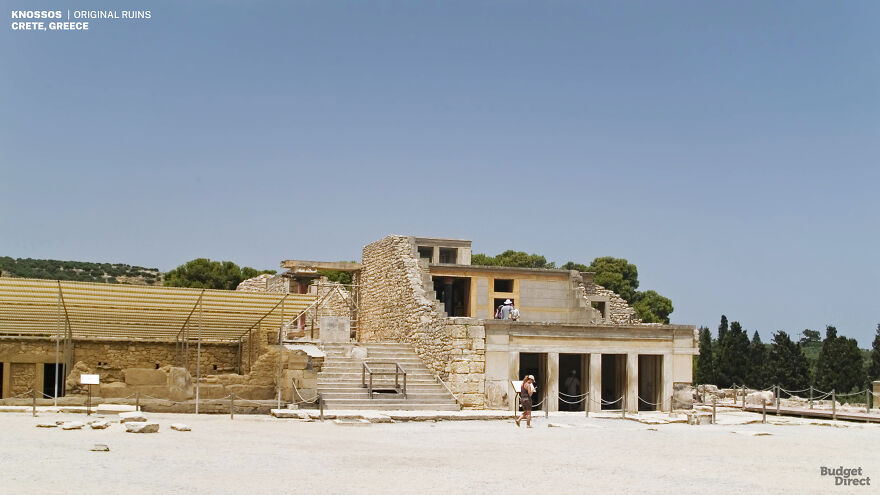 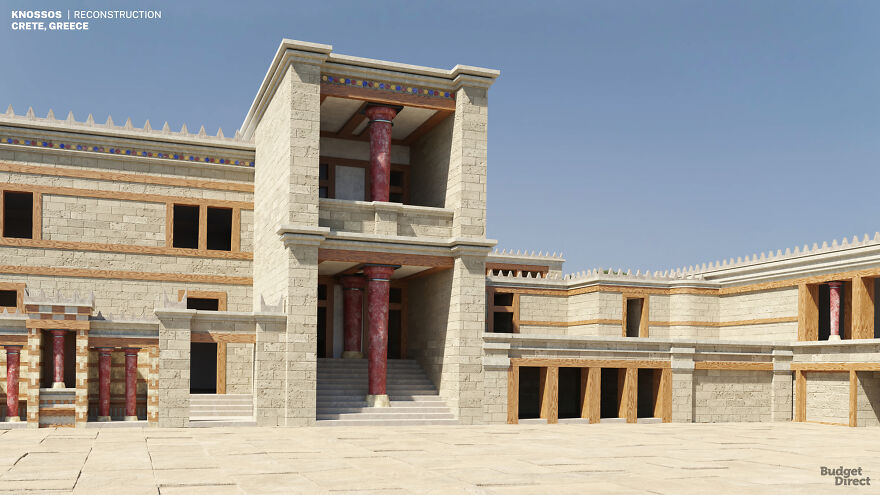 “The oldest palace on this list by two millennia, Knossos, was constructed circa 1700 BC. In addition to its political function, it also was designed as an economic and religious center for the mysterious Minoan civilization. Knossos was destroyed circa 1375 BC—surviving invasion, fire, and earthquake nearly a century longer than similar Minoan complexes.

Without a way to decipher Minoan writings, the ruin’s many striking frescoes are key to understanding Minoan culture. For instance, one depicts the sport of bull-leaping. This sport may have given rise to the Minotaur legend—a cannibalistic half-man/half-bull from later Greek mythology.” 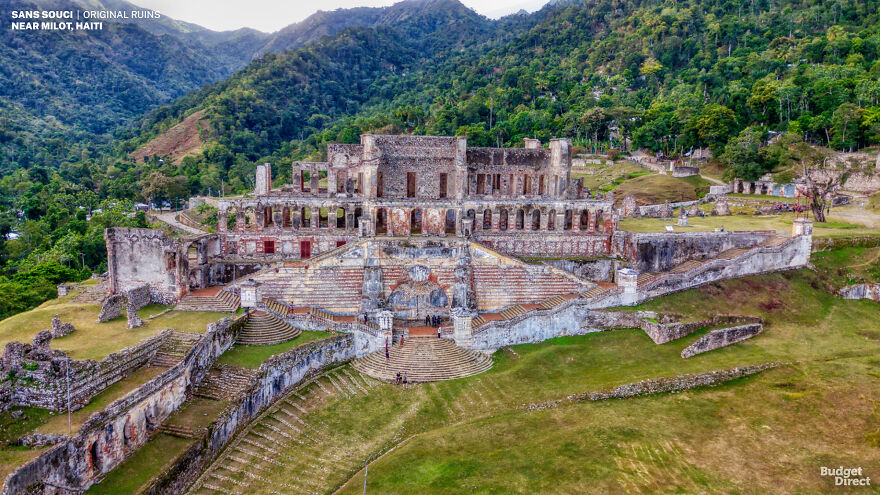 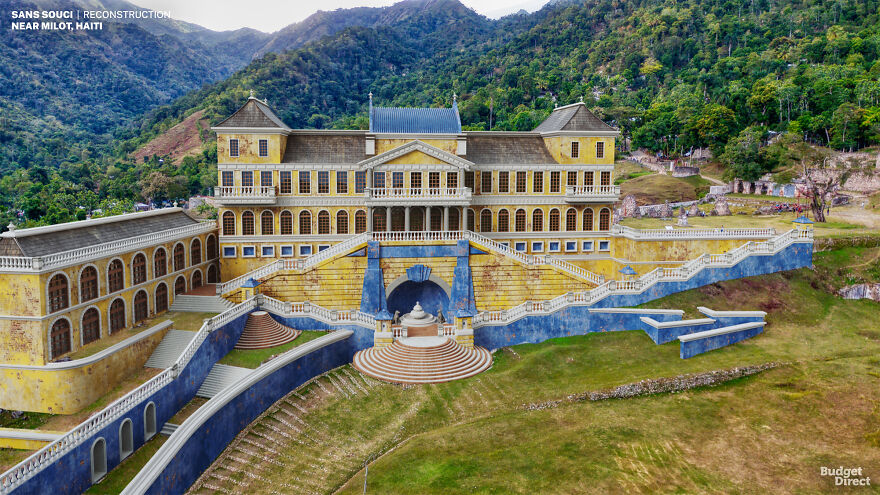 “Revolutionary general Henry Christophe declared himself king over northern Haiti in 1811. According to one perspective, Henry I was a tin-pot dictator who forced his fellow Haitians back into virtual slavery and plunged the nation into a 13-year civil war. According to another, he was a brilliant lawgiver who forged a colony of former slaves into a nation influential enough to force concessions from the great empires of Europe.

While Henry’s legacy is somewhat debatable, the beauty of his palace is not. Called the “Versailles of the Caribbean,” the palace’s majestic steps and terraces are an impressive monument to Haitian independence.” 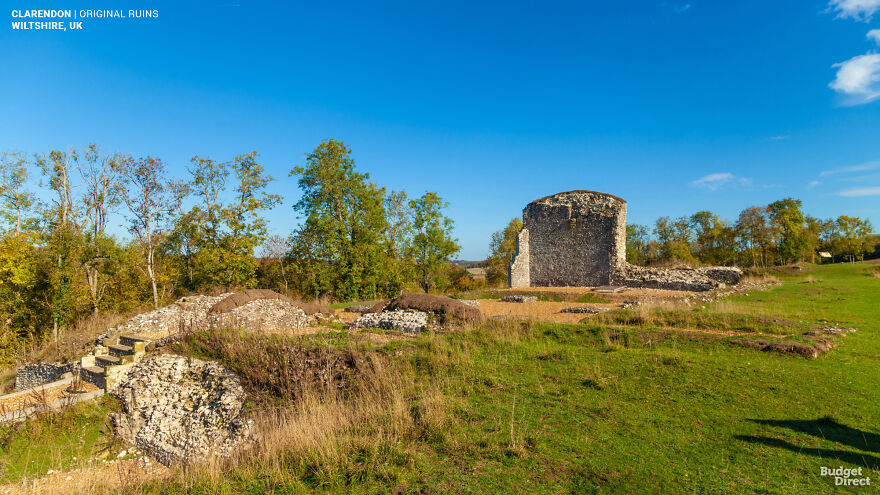 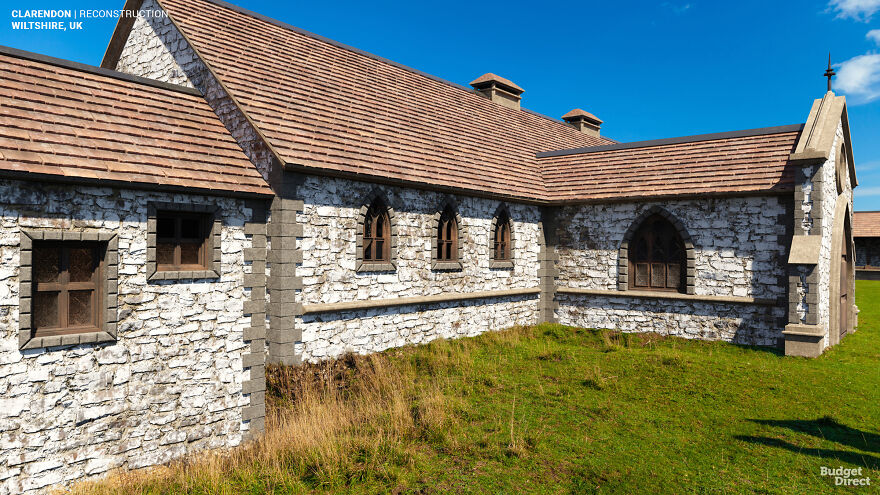 “Despite the composition of a very significant English legal document within its halls, this 12th-century palace is nearly forgotten. The ‘Constitutions of Clarendon’ were Henry II’s attempt to gain legal authority over church clerks, but instead exacerbated a feud with his friend Thomas Becket. This feud eventually led to Archbishop Beckett’s martyrdom.

Henry III expanded the palace, commissioning a carved fireplace and stained glass chapel. By the 1400s, Clarendon was a sprawling royal complex. It remained a favorite retreat of monarchs until the Tudor era when the high cost of upkeep resulted in its rapid decline. Today, only a single wall remains above ground.”

Dungur Palace, “Palace of the Queen of Sheba,” Ethiopia 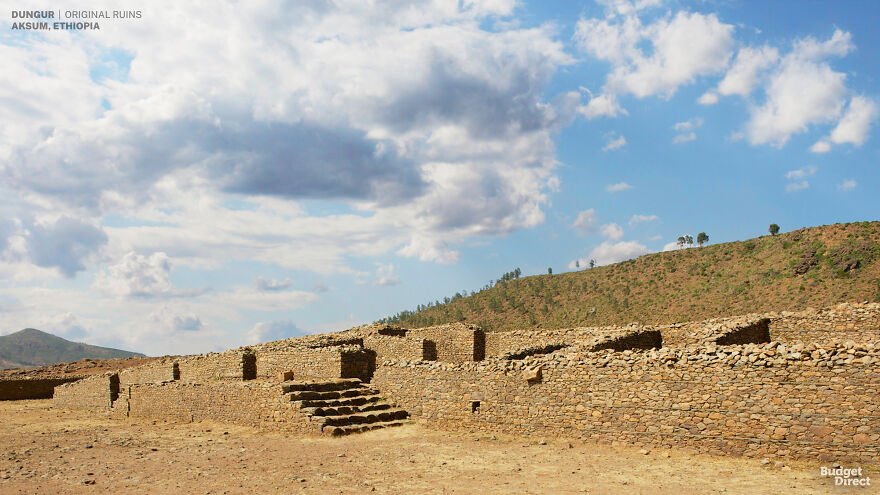 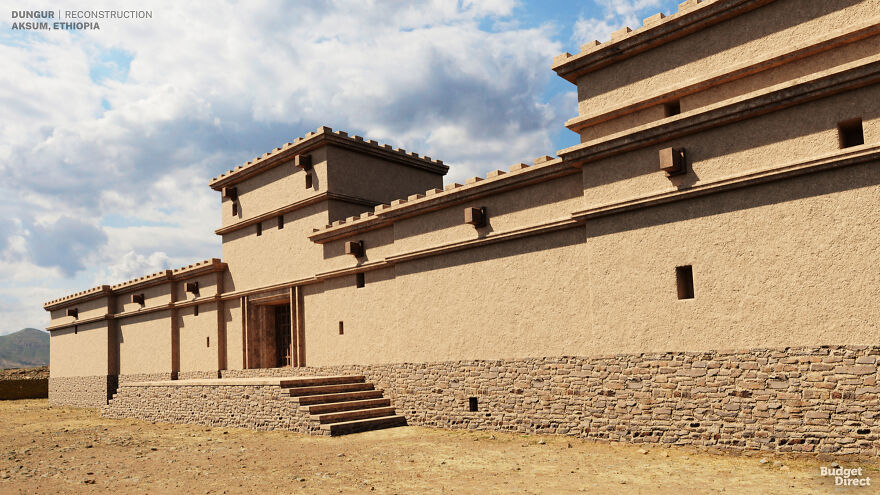 “Dungur Palace is in the Ethiopian village of Aksum—once the bustling capital of an African empire stretched from southern Egypt to Yemen. The 6th-century mansion contains approximately 50 rooms, including a bathing area, kitchen, and (possible) throne room.

Little is known about the history of the building itself. Its nickname—“the Palace of the Queen of Sheba”—is wishful thinking. However, discovering a carving of a “beautiful woman” during excavation has fueled hope that remains of the queen’s real residence may hide beneath Dungur.”