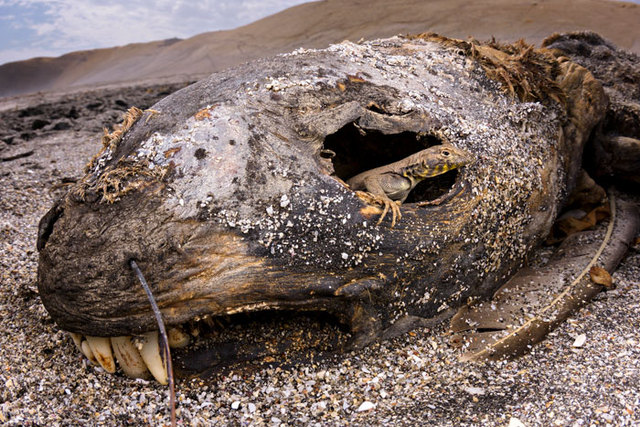 Every year London’s Natural History Museum organizes the ‘Wildlife Photographer of the Year’ competition where photographers from all around the world submit their wildlife pictures. This year over 45,000 photos were submitted and the winners have recently been announced.

Photographers from 95 countries have competed for the title and the grand title went to Dutch photographer Marsel van Oosten. His winning photograph, titled “The Golden Couple”, features two golden snub-nosed monkeys in the Qin Ling Mountains, China. One of the judges, Rosamund Kidman Cox, described the photo as a “symbolic reminder of the beauty of nature and how impoverished we are becoming as nature is diminished” and an artwork “worthy of hanging in any gallery in the world.”

Cox said the judge panel kept going back to Oosten’s picture: “It’s almost like a stage set. I think what makes it are the colours and the lighting. These monkeys normally feed in the trees, but somehow Marsel’s managed to catch them on the ground, and he’s carefully thrown a very gentle flash on to the scene to illuminate that amazing fur.”

In an interview with BBC News, the photographer said he was both shocked and honored to receive the award: “I am happy that it is with this particular image because it is an endangered species and one that very few people even know exists and it is important that we realise that there are a lot of species on this planet that are under threat.”

Check out the winners of this year’s competition in the gallery below!

#1 “The Midnight Passage” By Vegard Lødøen, Norway, Highly Commended 2018 Animals In Their Environment

‘A dream came true when I took this picture,’ says Vegard. After years of searching, he had finally found a riverside location visited by the deer of Valldal. After partly submerging his camera in a waterproof box, he set up a flash above and below the water, along with motion sensors. Near midnight, a male crossed the river – the camera capturing its proud pose.

After moose, red deer are the largest species of deer. Only the males have antlers, which have been known to grow to more than a metre in length and weigh up to five kilogrammes. At the end of each winter they shed their antlers, which are made of bone – when spring comes they regrow, protected by a soft covering known as velvet. 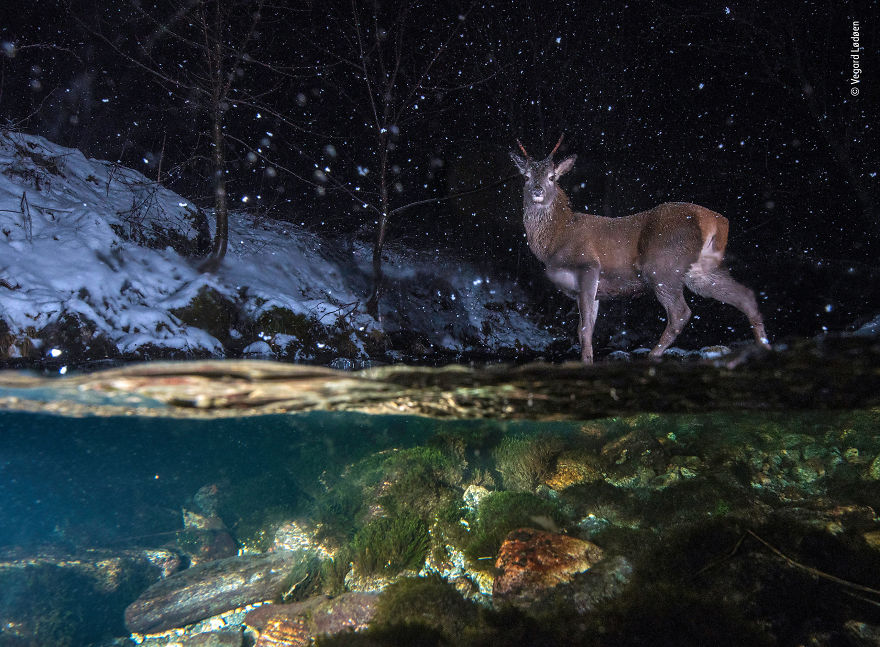 Tom saw the rook as he glanced out of his living room window. Wings spread, the bird was using the neighbour’s chimney pot to smoke bathe. Realising the opportunity – and knowing the heat and smoke would only allow the rook to remain for a few minutes – he quickly took his photograph before leaving it to enjoy its smoky bath.

Rooks are incredibly intelligent creatures and smoke bathing is likely to be a learned behaviour, rather than instinct. The smoke helps the birds to fumigate their feathers, ridding them of irritating parasites such as lice, mites and ticks. The related jackdaw has even been seen fumigating itself over smouldering cigarette ends. 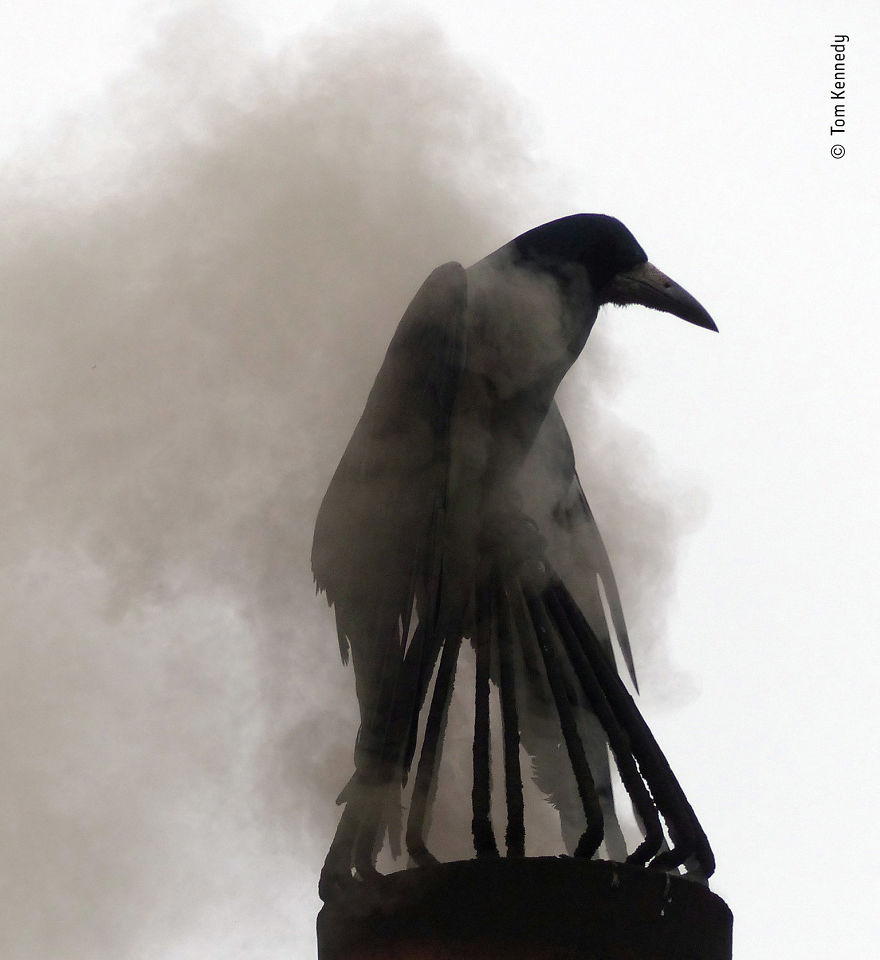 One evening during Botswana’s dry season, I waded into a water hole to capture a shimmering reflection of a gathering of elephants at twilight, with a full moon suspended in a luminous pink sky. The image is my homage to the primeval qualities of southern Africa’s wilderness, the grandeur of elephants, and the precious nature of water in a land of thirst. 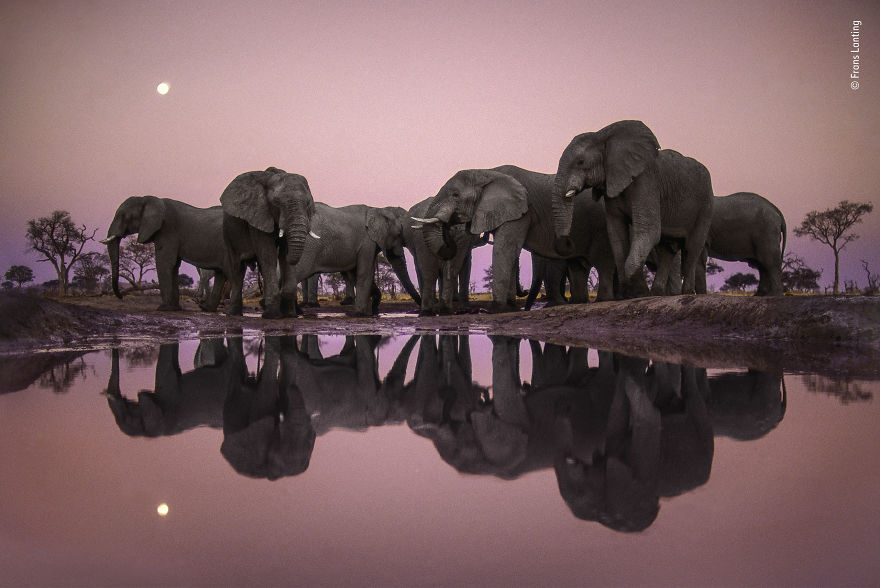 While driving with his father through the city, Arshdeep saw a bird disappearing into an old waste-pipe. He asked to stop the car, then primed his father’s camera and telephoto lens, kneeling up on the seat and resting it on the half-open window at eye-level. It wasn’t long before a spotted owlet emerged, followed by a second. Both stared right at him.

Spotted owlets traditionally nest in tree hollows, where the female lays up to five eggs. Although common in the Punjab, these small birds are rarely seen in the day, as they are nocturnal. This breeding pair – the larger female on the left – is among those using urban nesting sites following widespread deforestation in the region. 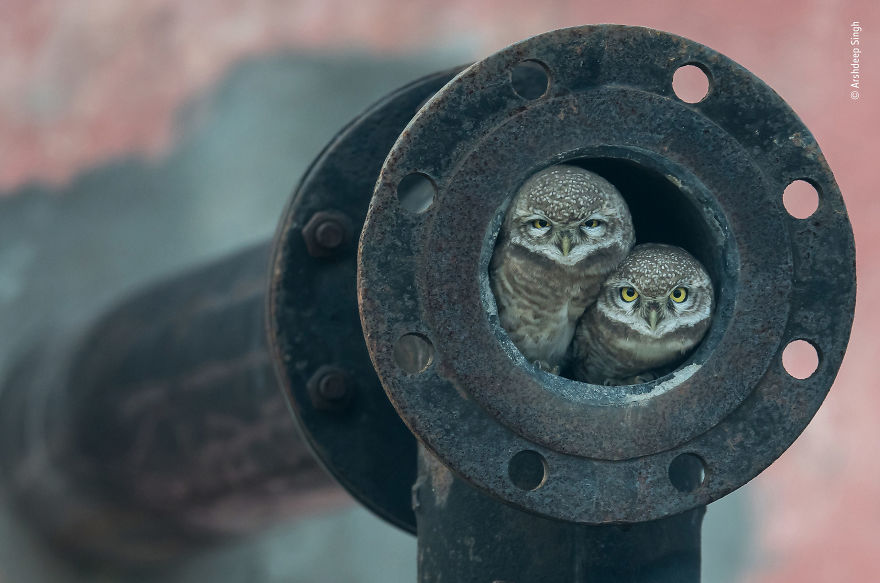 ‘I love creating photos with impact,’ says Isak, who is often on the lookout for Zambia’s most iconic animals. He was photographing a pride of lions when this lioness wandered off. Anticipating it was going for a drink, he positioned himself by the nearest waterhole. It then appeared through the long grass, framed by a wall of lush green.

Lions kill more than 95 per cent of their prey at night, and spend the majority of the day resting. Although they drink readily when water is available, they are also capable of consuming sufficient moisture from their prey and plants – making them perfectly adapted to their arid landscape. Yet despite this, lion numbers are decreasing significantly. 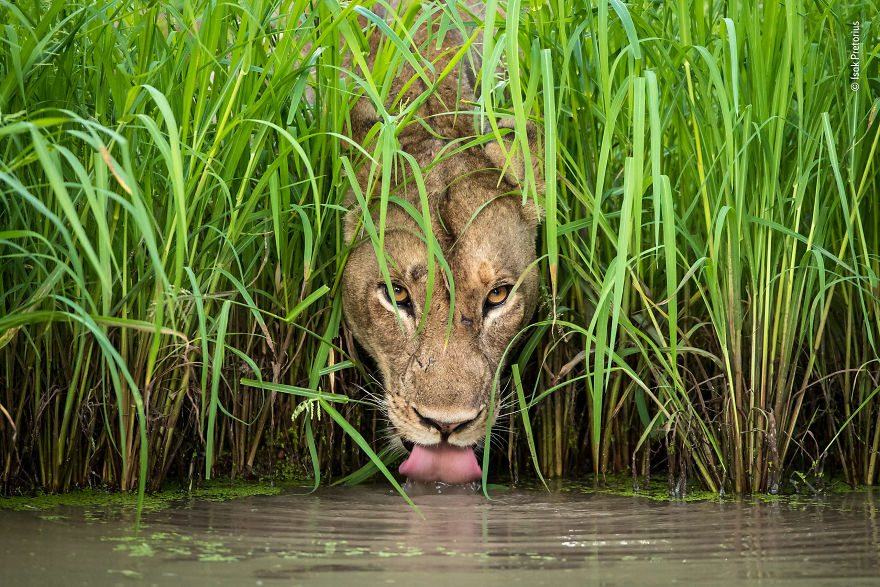 The rusty metal rod at the opening of a sewerage outlet pipe was a favourite perch for kingfishers, giving them a view of the fish below. Felix visited the spot many times to study them. Seeing the photographic potential of the colourful scene, he used a gentle flash to highlight this particular bird against the dark opening.

Excellent hunters, kingfishers are also good indicators of high water quality. With better water treatment and bans on pollutants in some cities, these birds are slowly returning to urban areas. Kingfishers can struggle to find natural fishing perches in cities and so use whatever they can find, including shopping trollies and scrap metal. 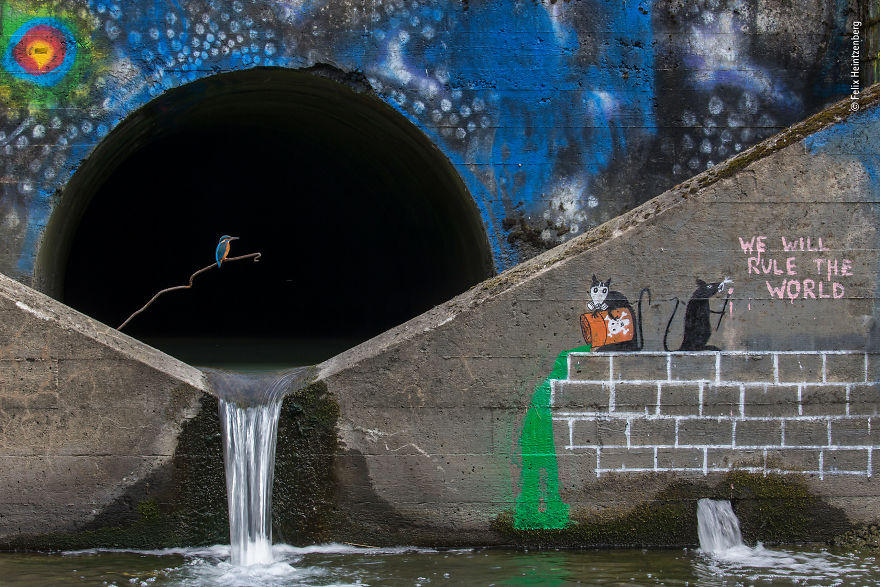 #7 “Ahead In The Game” By Nicholas Dyer, Uk, Highly Commended 2018 Behaviours Mammals

After tracking this pack of African wild dogs on foot for more than three kilometres, Nicholas looked on as this pair of pups played a macabre game with the remains of their baboon breakfast. ‘Half of me felt disturbed by the disrespect this deceased fellow primate was receiving,’ he says. ‘The other half was caught up in the infectious joy of the puppies.’

The endangered African wild dog, also known as the painted wolf, is best known for hunting antelope, such as impala and gazelle. However, its main prey can vary from pack to pack and will include smaller animals such as this baboon. Known for their intricate social structures, painted wolf pups old enough to take solid food are given priority at kills. 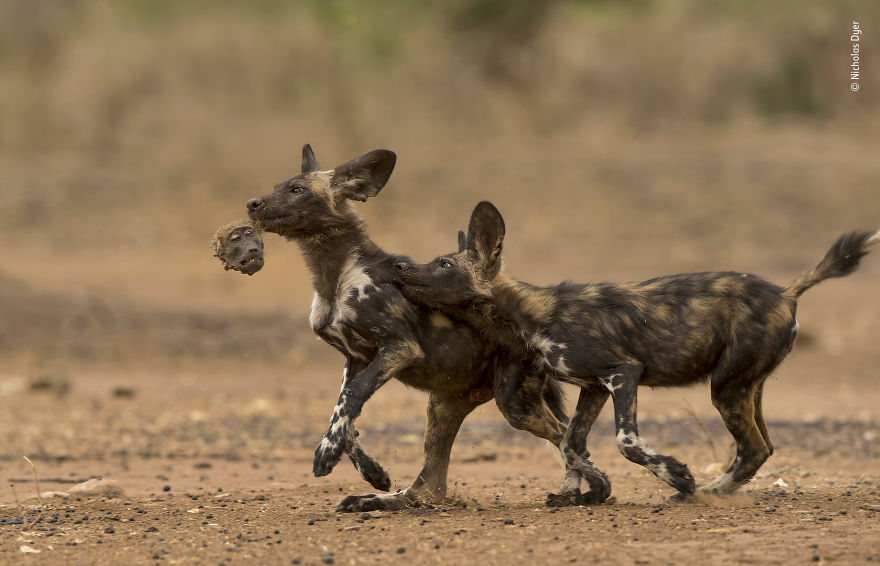 Kuhirwa, a young female mountain gorilla, would not give up on her dead baby. Initially she cuddled and groomed the tiny corpse, carrying it piggyback like the other mothers. Weeks later, she started to eat what was left of it. Forced by the low light to work with a wide aperture and a narrow depth of field, Ricardo focused on the body rather than Kuhirwa’s face.

From elephants stroking the bones of deceased family members to dolphins trying to keep dead companions afloat, there is an abundance of credible evidence to show that animals visibly express grief. Kuhirwa’s initial actions can be interpreted as mourning, her behaviour showing the pain of a mother who has lost her child. 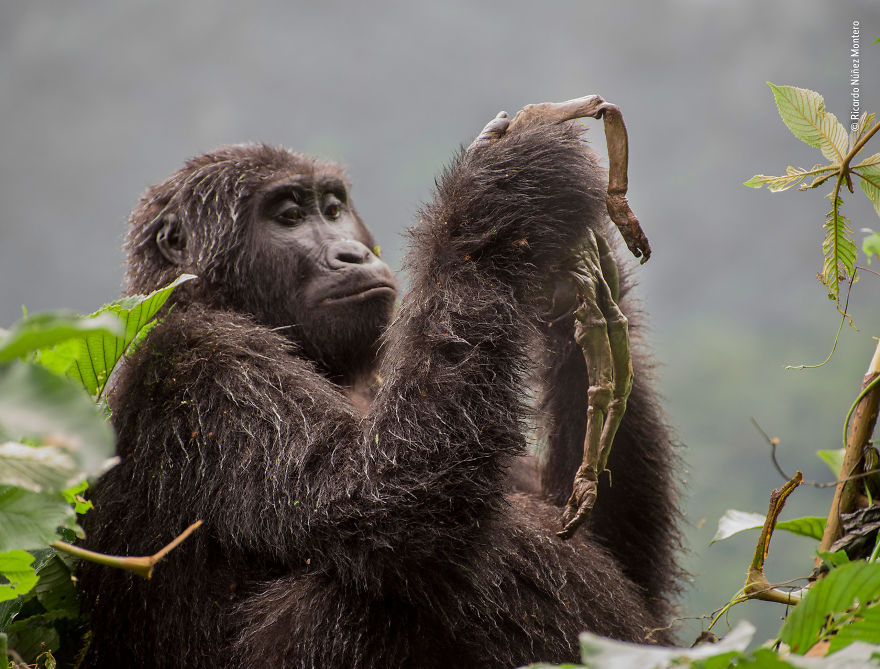 Surveying the scene, Darío was captivated by ‘the fragility of the chick’ as it used its oversized legs to scurry after its parents. After an uncomfortable crawl through a salt field in the rain and mud, Darío trained his lens on the speckled fluff of the chick, framing it against the dramatic background of salt and sky.

Two-banded plover chicks will leave their nests almost immediately after they hatch, relying on their stilt-like legs to keep pace with their parents and to evade potential predators. Their long legs also keep their soft down away from the wet ground. After four or five weeks, they will grow large enough to fly away from the care of their mother and father. 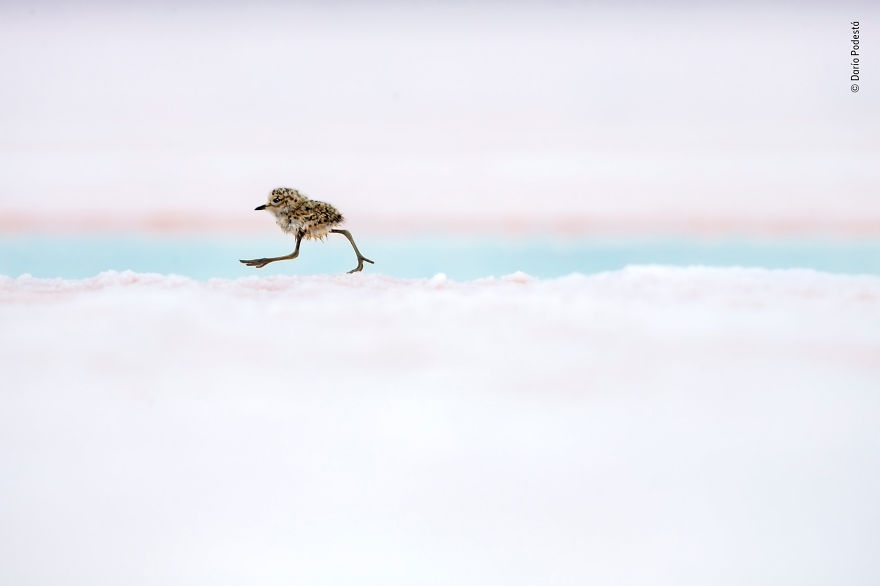 #10 “A Bear On The Edge” By Sergey Gorshkov, Russia, Highly Commended 2018 Animals In Their Environment

For Sergey, this photograph of a solitary polar bear walking steadily along a glacier is ‘a symbol of Franz Josef Land’. It speaks of the vulnerability of an iconic animal that depends entirely on this frozen wilderness. His powerful composition gives no hint of the biting wind and icy sea spray he had to endure while taking it.

The Russian Arctic National Park has recently been expanded to include the 191 uninhabited islands of Franz Josef Land. With a lack of data for this remote region, both polar bear numbers and rates of sea ice decline are unknown. This presents problems for polar bear conservation, as researchers need data to understand the impact of climate change here. 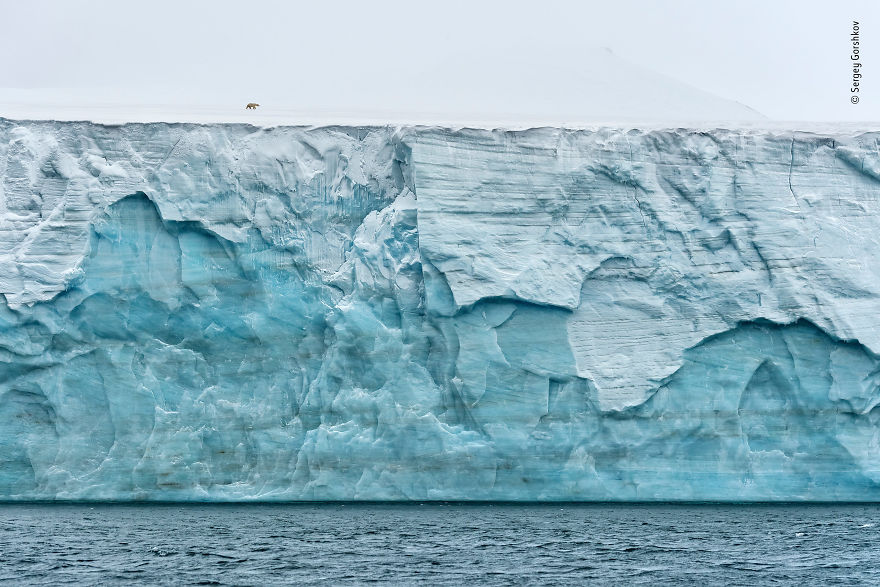