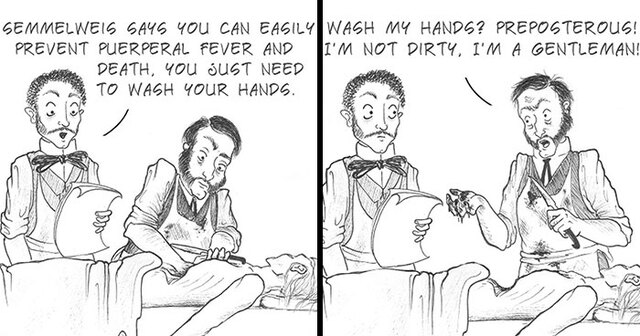 Marzena Żyła-Hoppe is an artist and history lover from Poland who creates the funny yet gruesome comic series titled Veinity Fair. In her comics, the artist illustrates all the bizarre things that send a shiver down your spine nowadays but were considered completely normal back during the Victorian times.

The artist says she has been interested in history since she was young but always felt like something was missing. “What did the everyday life of sailors look like? How did people deal with ailments before anesthesia? What would women do during their periods? Were children having as much fun as they do today? What were the burial practices of our ancestors?” pondered Marzena.

Marzena says that the thirst for knowledge never ceased and eventually she became acquainted with the less glorious side of history. The artist was especially fascinated with the Victorian era for its blend of scientific progress, bizarre practices and questionable individuals.

This thirst for knowledge has never ceased and I became an adult engrossed in books, documentaries, and other media which showed me the less glorious, but much more intriguing side of history. I was especially fascinated with the Victorian era–its perfect blend of scientific progress, bizarre practices, and questionable individuals.

“Of course, I wanted to share all this knowledge with others, but it quickly turned out that not everyone is up to discussing bloodletting methods and vintage underwear during the office lunch break,” joked the artist. “And that is why I’ve created Veinity Fair, a comic strip with unusual trivia and a dash of dark humor, fueled by morbid curiosity!”

See Marzena’s comics in the gallery below! 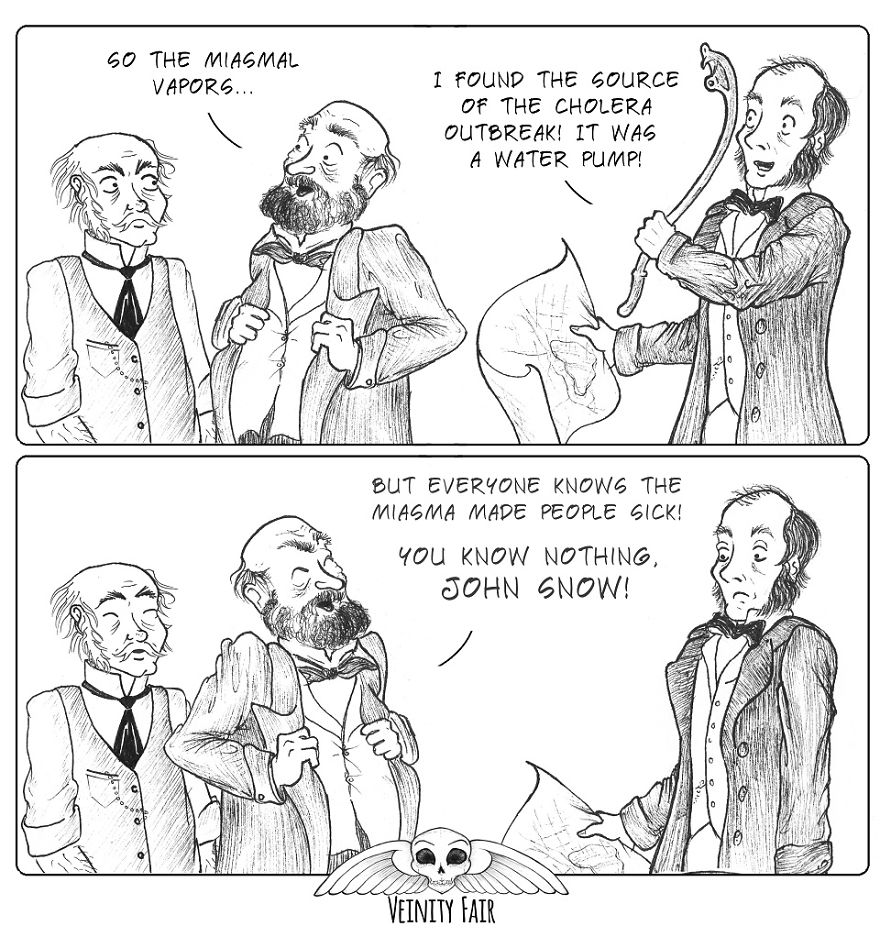 John Snow was an English physician, best known for finding the source of a cholera outbreak in Soho, 1854. By putting all known cholera cases on a map, he found the source of all troubles – a contaminated water pump. Why was it such a big deal? This discovery not only led to shutting down the pump, but also worked in favor of the budding germ theory of disease. Even though Snow himself didn’t know that at the time, he contributed to the birth of epidemiology. 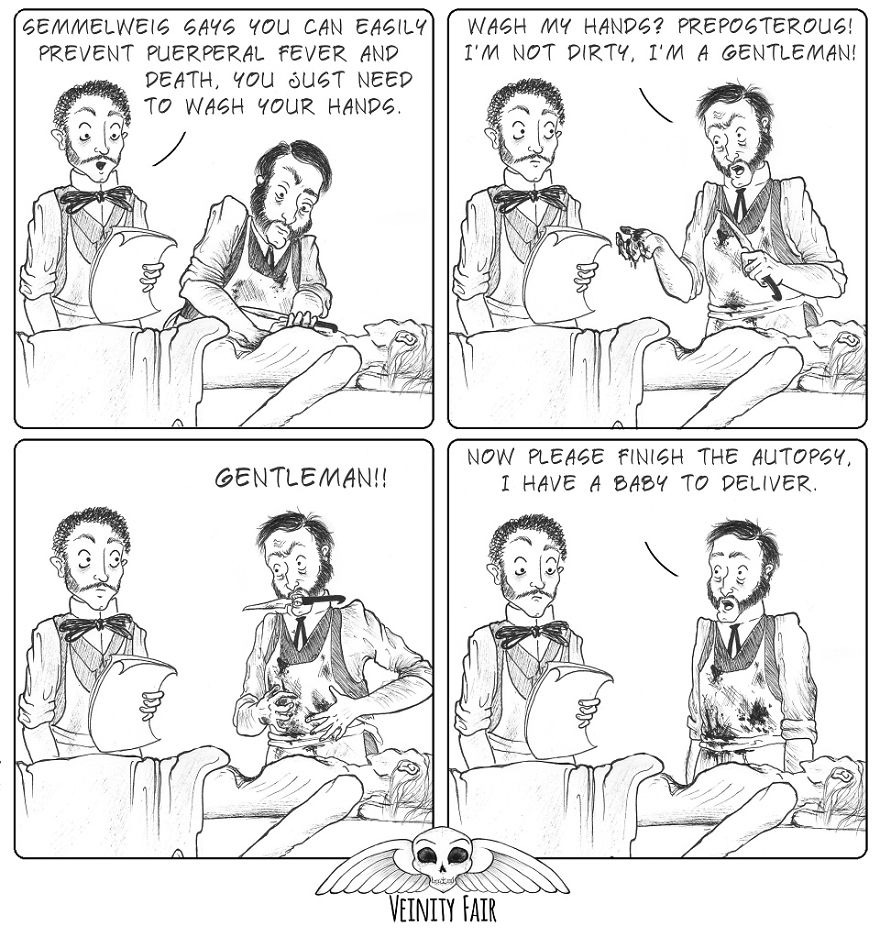 While working in Vienna General Hospital in the 1840s, Ignaz Semmelweis noticed a curious thing – the mortality rate of new mothers was a lot higher in wards supervised by doctors compared to those supervised by midwives. After some investigating, he found the source of the problem – only doctors had access to both maternity wards and autopsy tables. Semmelweis quickly developed a theory of what he called “cadaverous particles” and introduced rigorous handwashing in his clinics. Unfortunately, even though his method worked spectacularly well, he was ridiculed by most of the medical professionals until his death in a lunatic asylum. 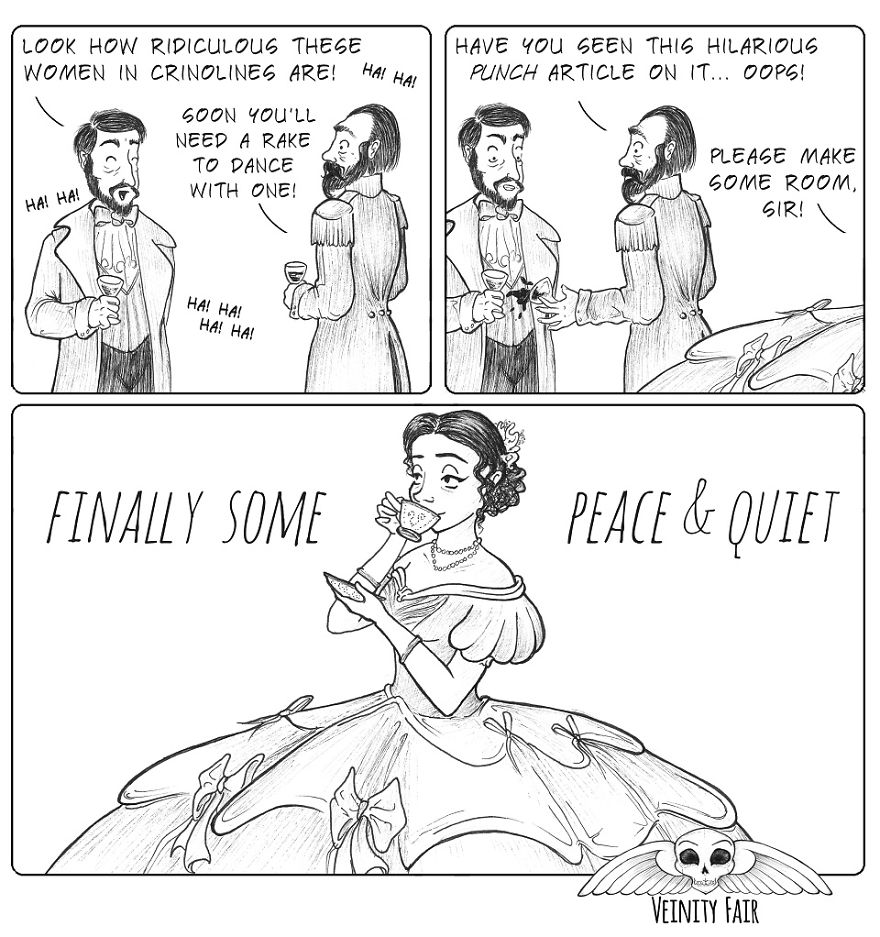 Crinolines were hugely popular in the second half of the 19th century, since their fairly light construction allowed women to play with fashion and big dress shapes without the need to carry the weight of several petticoats (as it was done earlier). This vast popularity of crinolines among women of all classes led to coining the word ‘crinolinemania’ and numerous caricatures in the media.

And while there were some hazards connected with wearing crinolines, especially in factories or near an open fire, they were definitely great at providing some personal space. 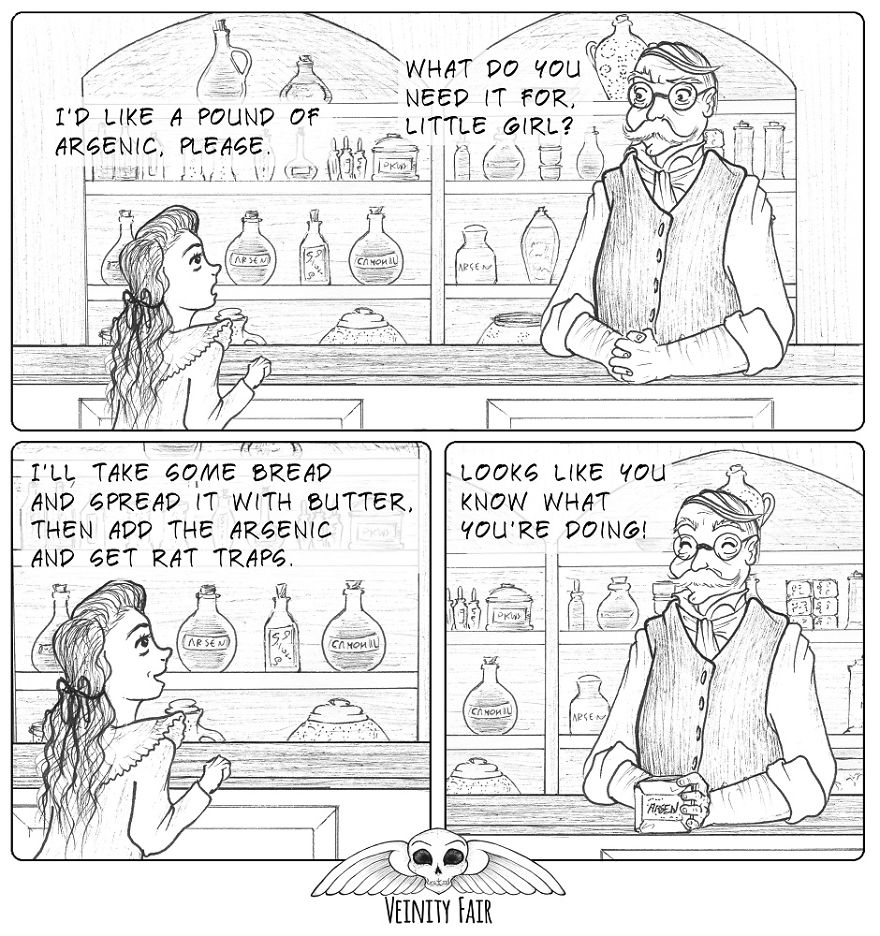 There were no regulations on buying and selling arsenic until 1851, and even then it could be relatively easy purchased by anyone who didn’t cause any suspicion. 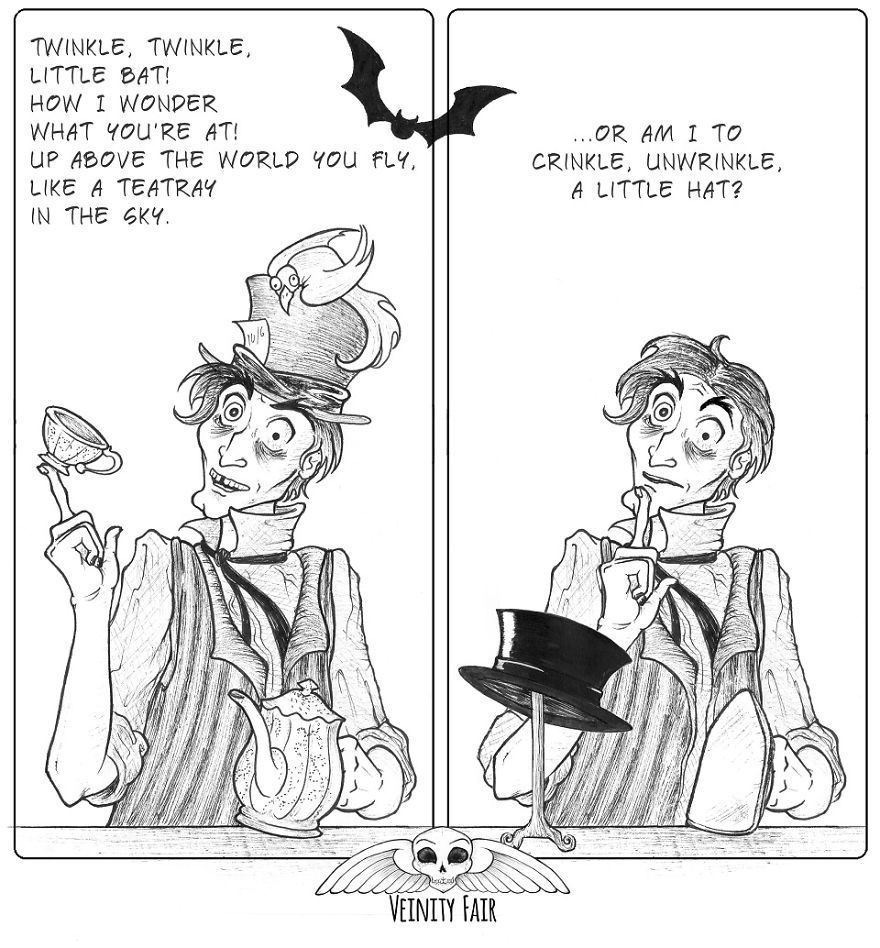 Erethism, more commonly known as mad hatter disease, is caused by mercury poisoning and can cause a variety of symptoms including tremors, timidness, anxiety, and even hallucinations. It was quite common among hat-makers as they were exposed to mercury used in the manufacturing of felt hats.

Even though the Hatter from Alice’s Adventures in Wonderland doesn’t display all of these symptoms, his creation might have been inspired by erethism. We know that Lewis Carroll’s uncle, Robert Wilfred Skeffington Lutwidge, was a Lunacy Commissioner supervising Pauper Lunatic Asylums. To keep patients busy, these asylums often organized group activities such as…tea parties. 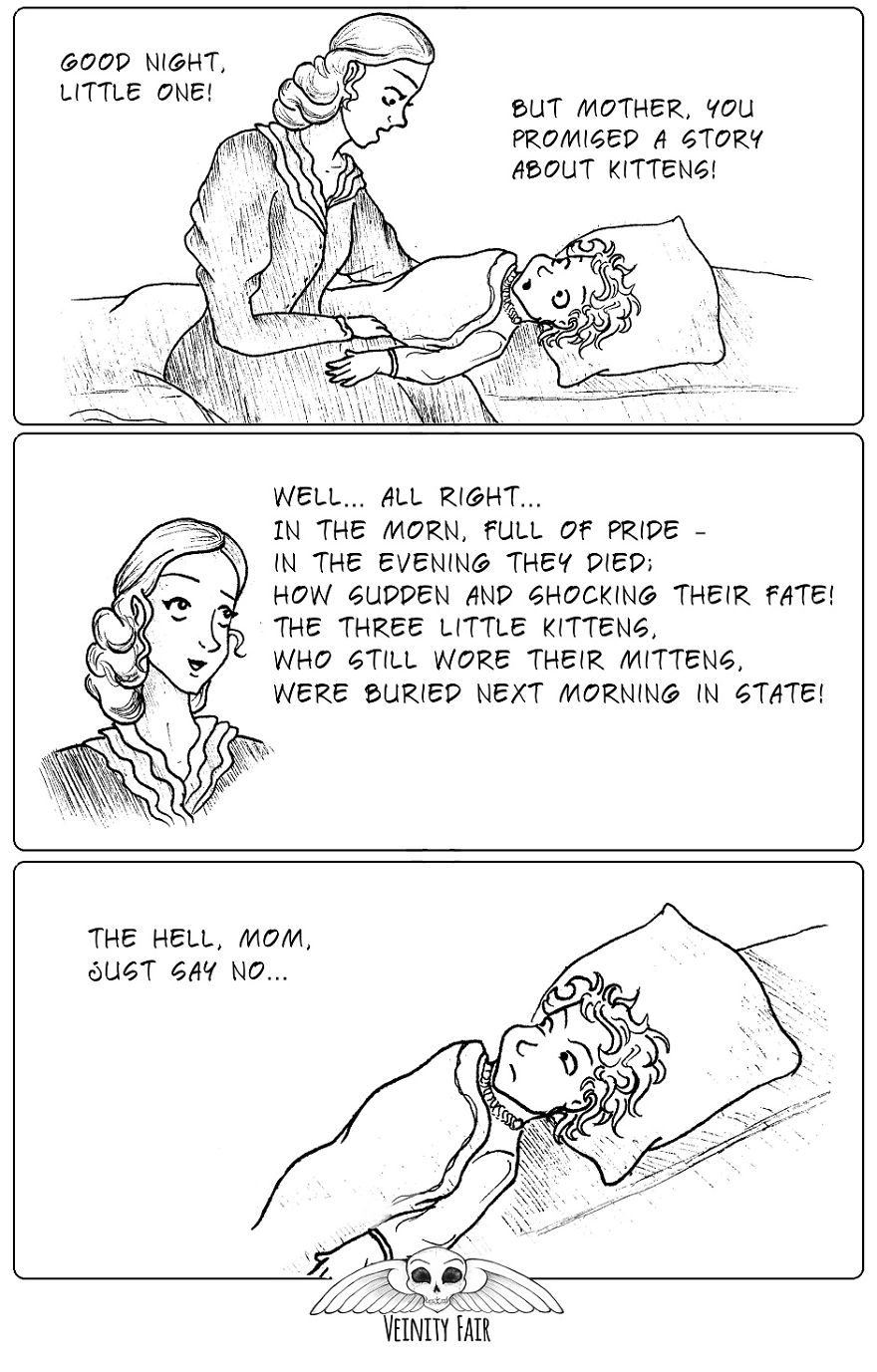 “…It was an age of high infant mortality. Even picture books prepared children for the melancholy realities.” 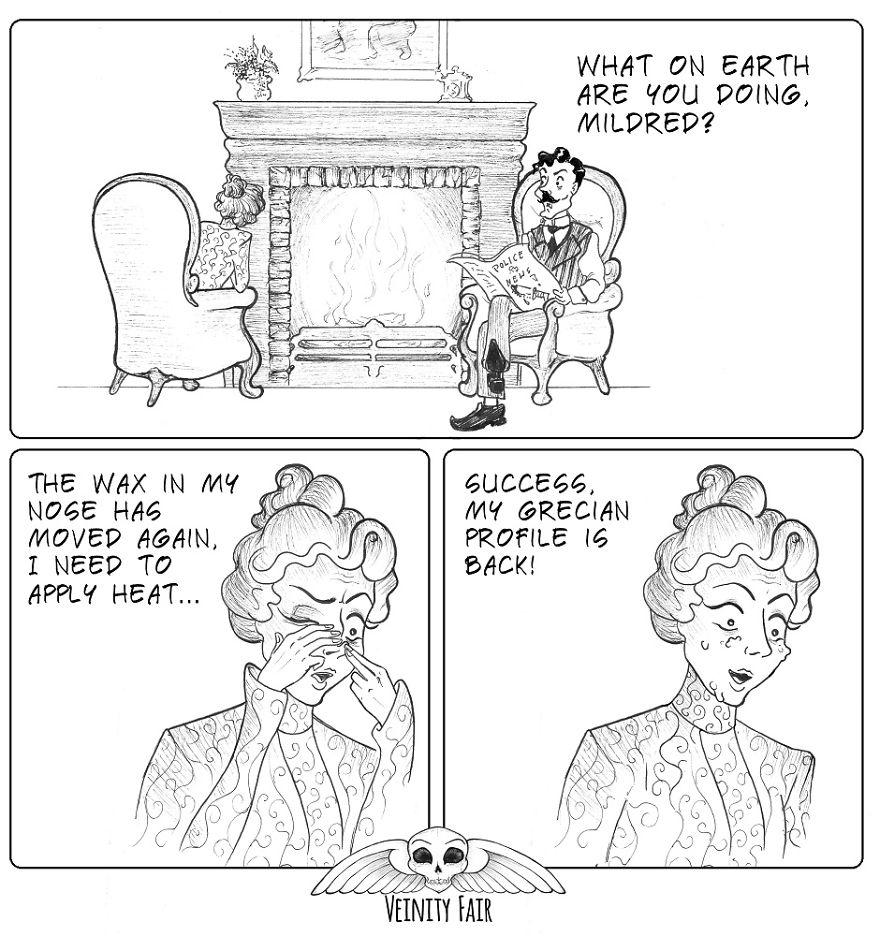 The Edwardian Era brought a new craze in plastic surgery – paraffin wax injections. The promise of a perfect nose or chin quickly faded, when it turned out that wax could wander beneath the skin causing infections, blood clots, and even cancer. 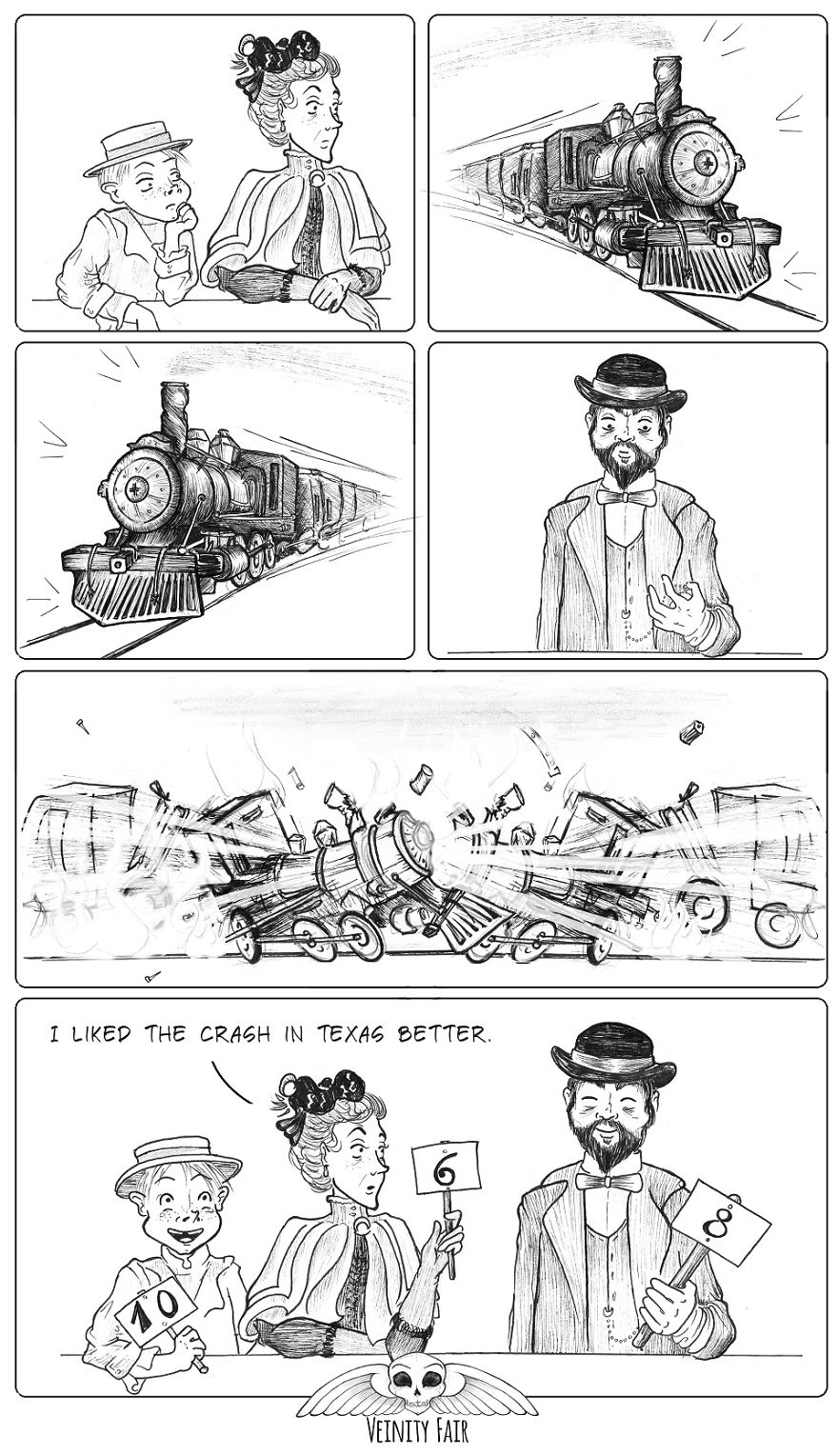 At the turn of the twentieth century, a new form of dangerous and very costly entertainment appeared… staged train crashes. Thousands of Americans would appear at these events, watching the crashes and collecting “souvenirs” from the wrecks.
This craze lasted for almost 40 years! 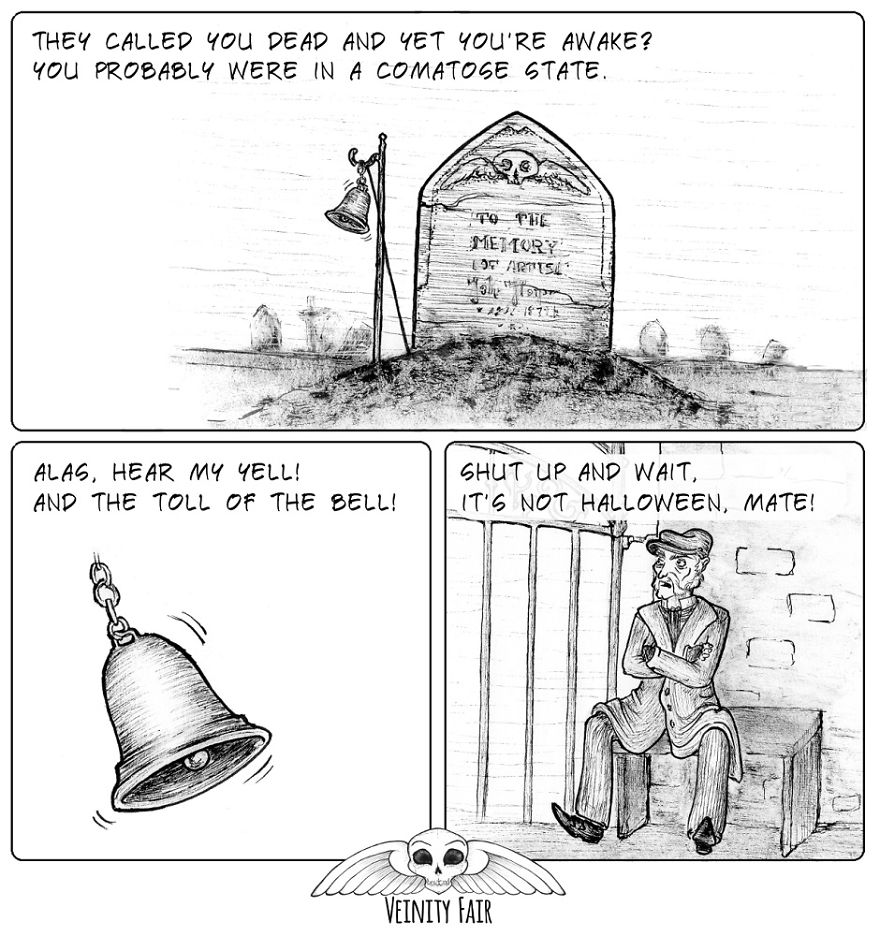 Safety coffins designs were mostly created during the 18th and 19th centuries, when the fear of being buried alive was quite common, due to numerous epidemics and popular fiction. 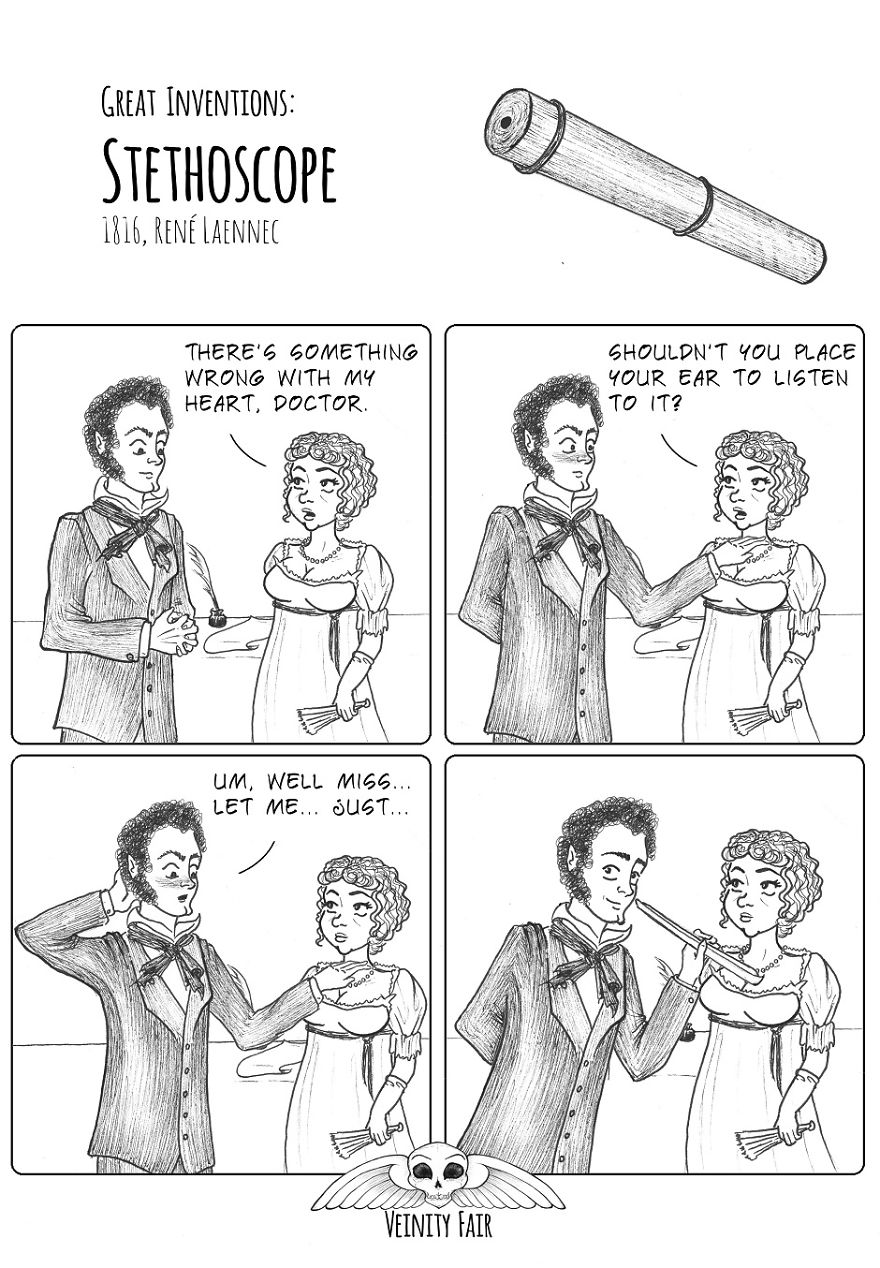 The invention of the stethoscope was inspired by a rather embarrassing moment in a young French doctor’s life. 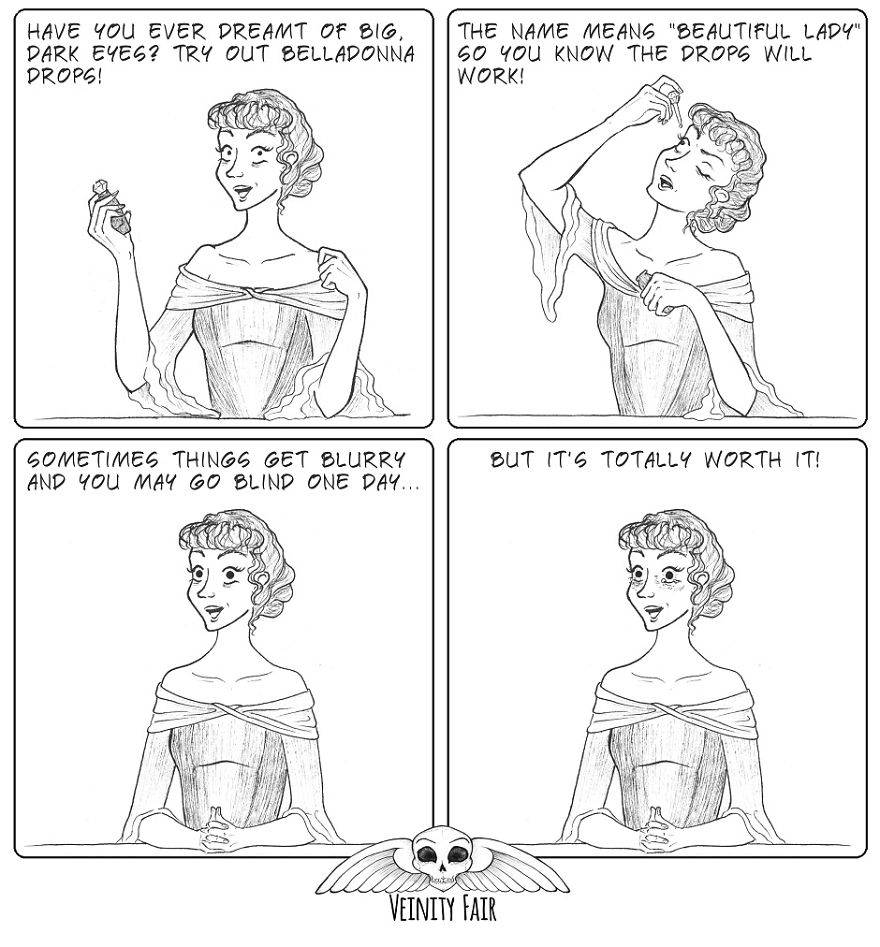 After her husband’s death, Mary Shelley kept his calcified heart in a desk drawer. And even though some modern scholars believe it was just his liver, Mary herself was convinced that she had Percy’s heart. Quite a suitable keepsake for the author of Frankenstein! 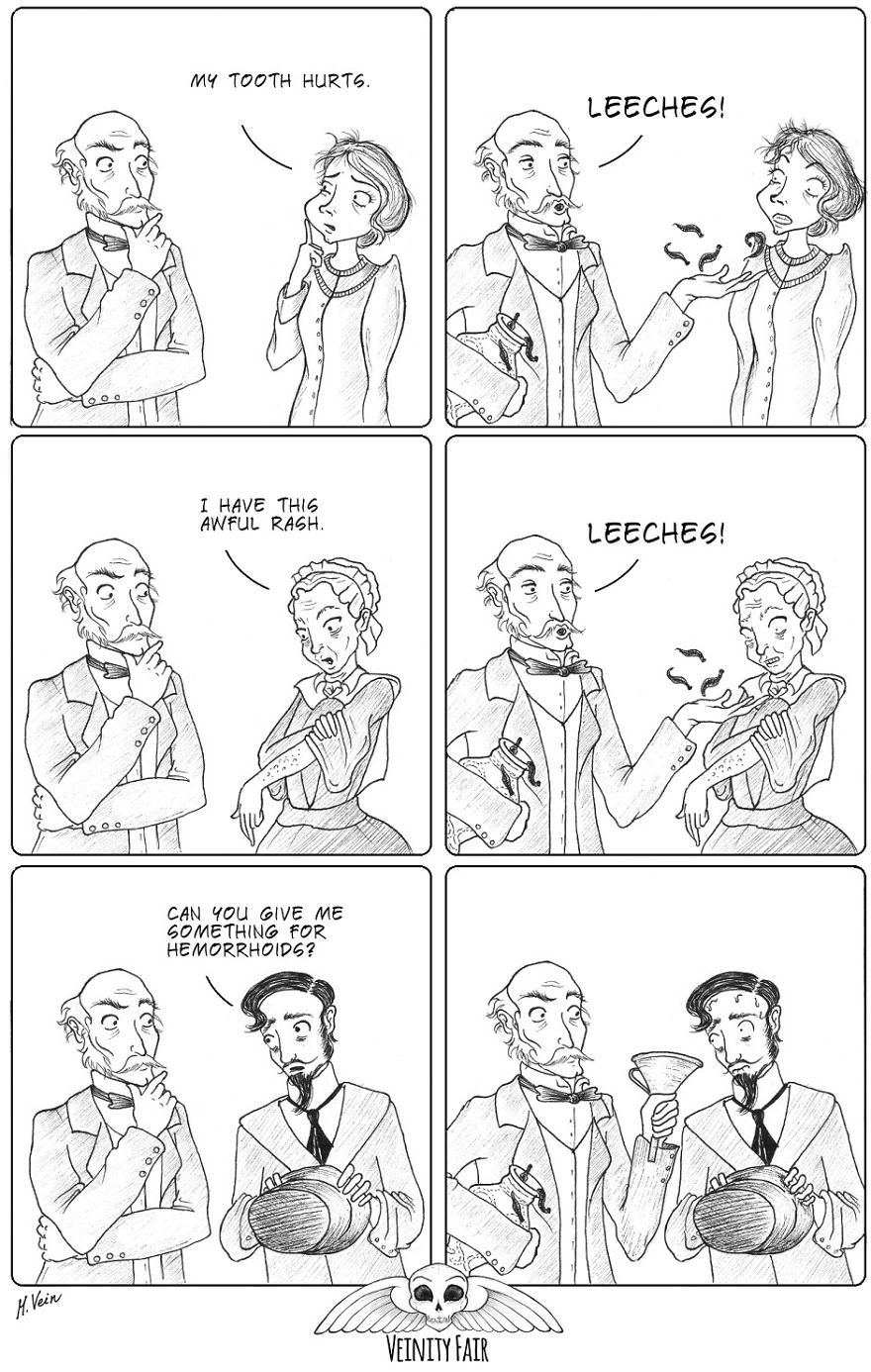 Bloodletting used to be one of the most popular medical practices, as it was supposed to bring the balance between the four humors inside the human body and thus treat all ailments, from rashes to tuberculosis. 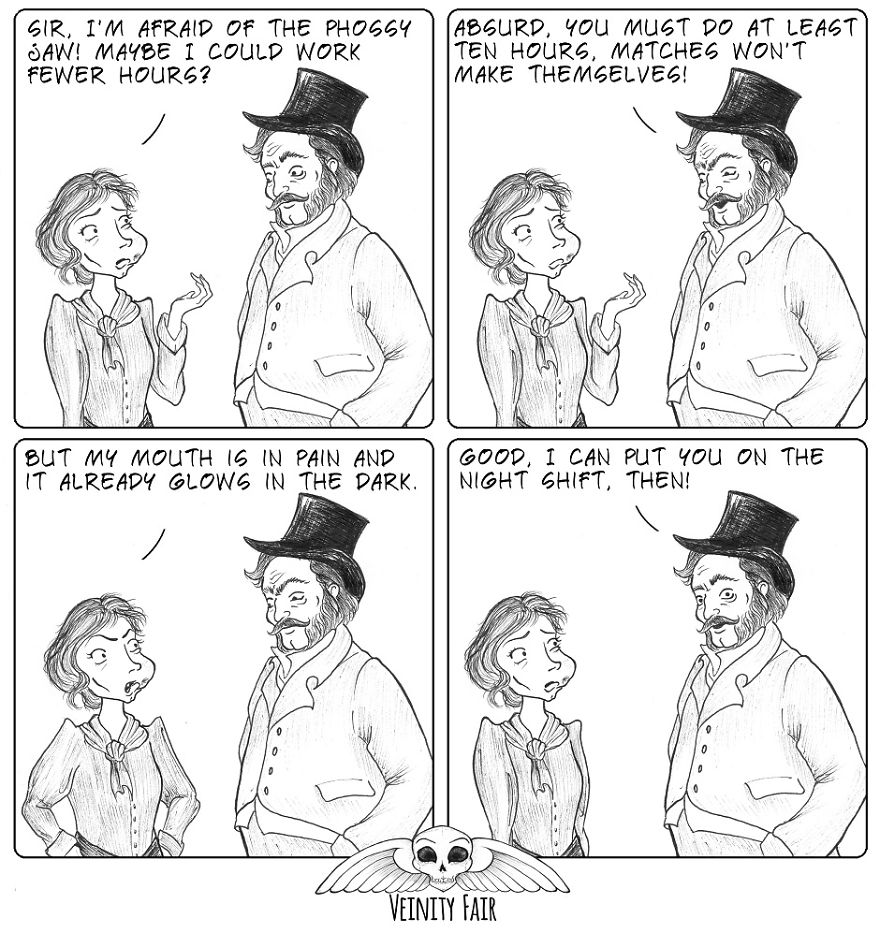 The harrowing conditions in match factories, including the use of highly poisonous white phosphorus, were not a secret in the Victorian times. However, It was not until the matchgirls’ strike of 1888 that the situation started to get better. 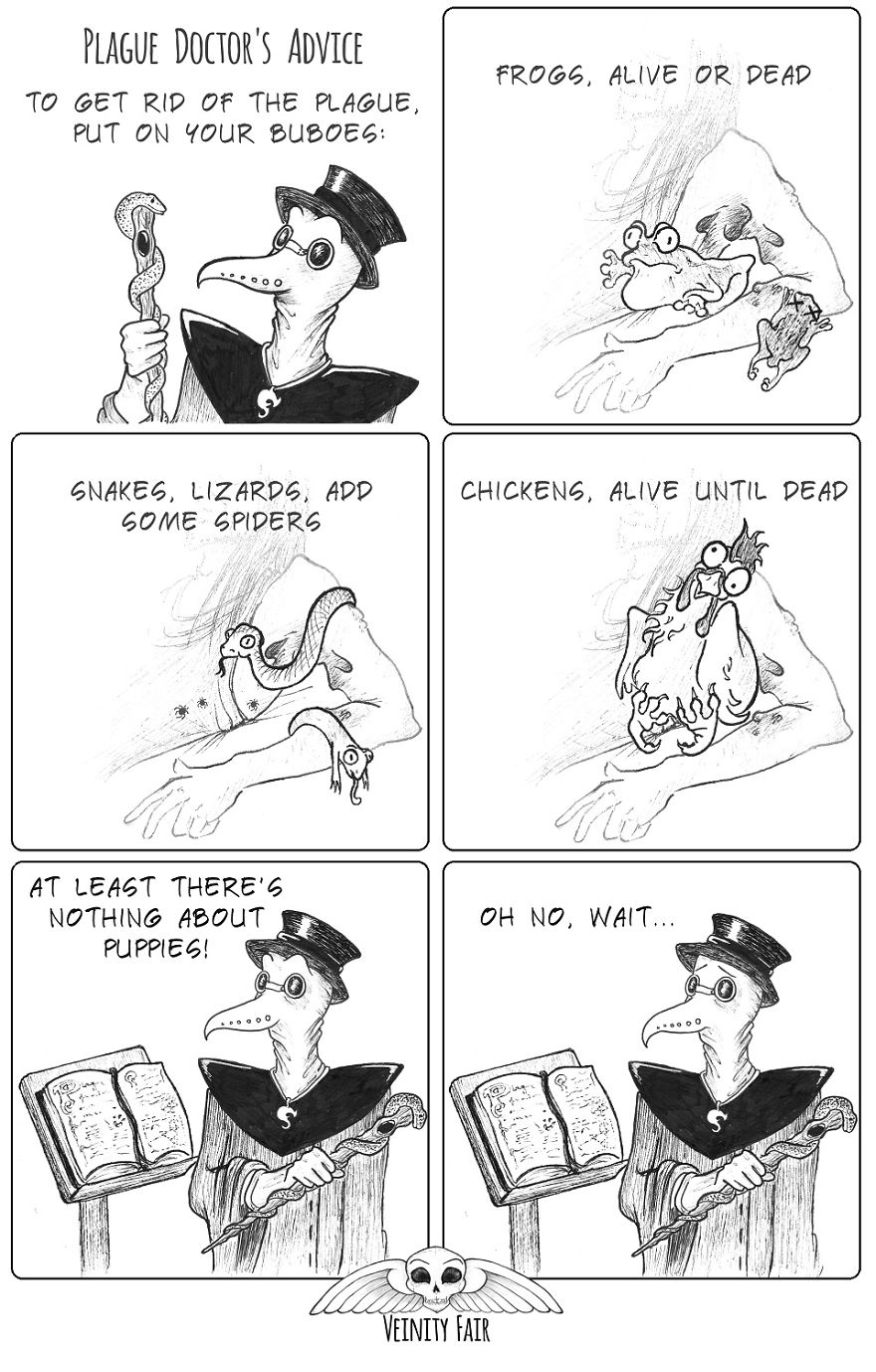 Usually Veinity Fair is all about the Victorians, but I just couldn’t resist sharing with you some more medieval advice… 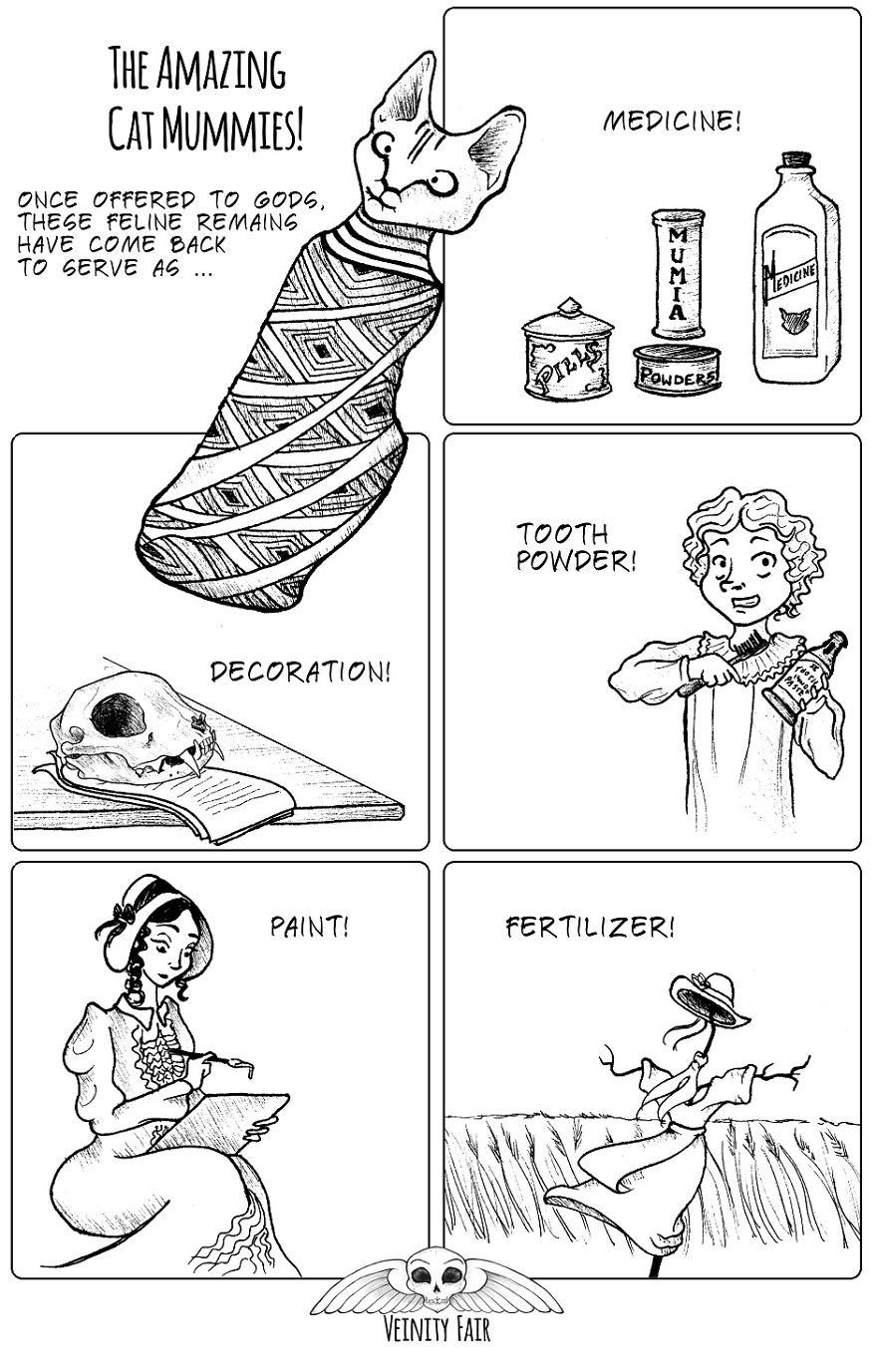 For a few centuries, mummies (both human and feline) were used by some in truly surprising and disturbing ways. 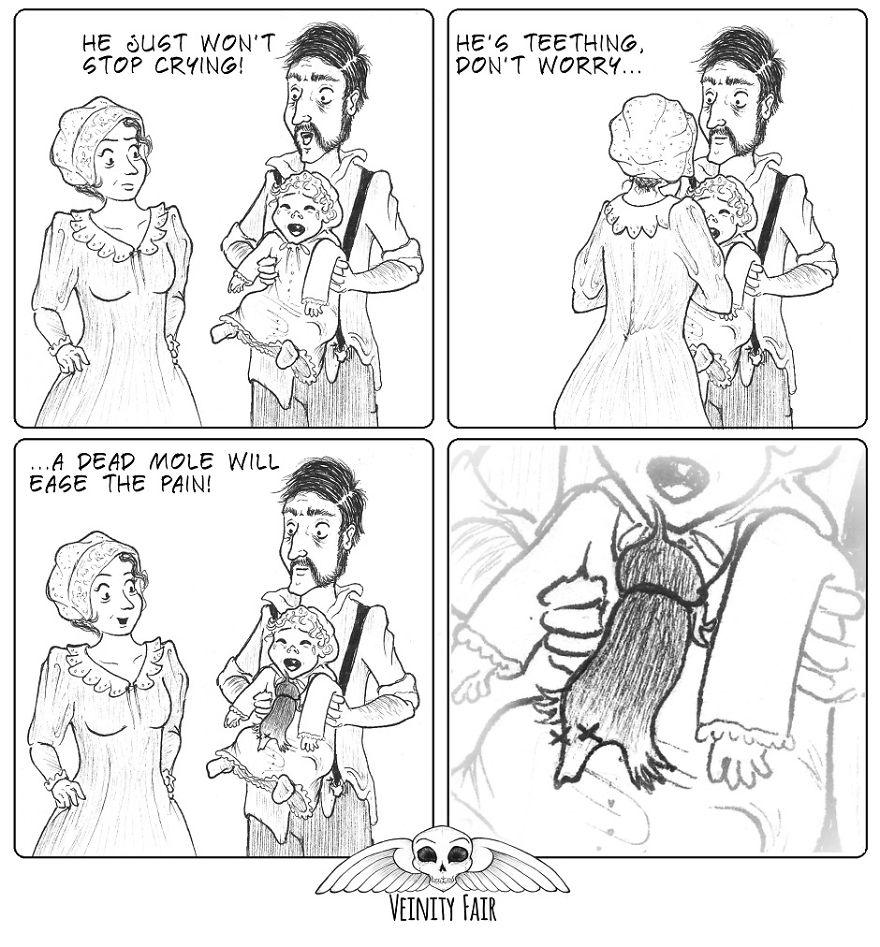 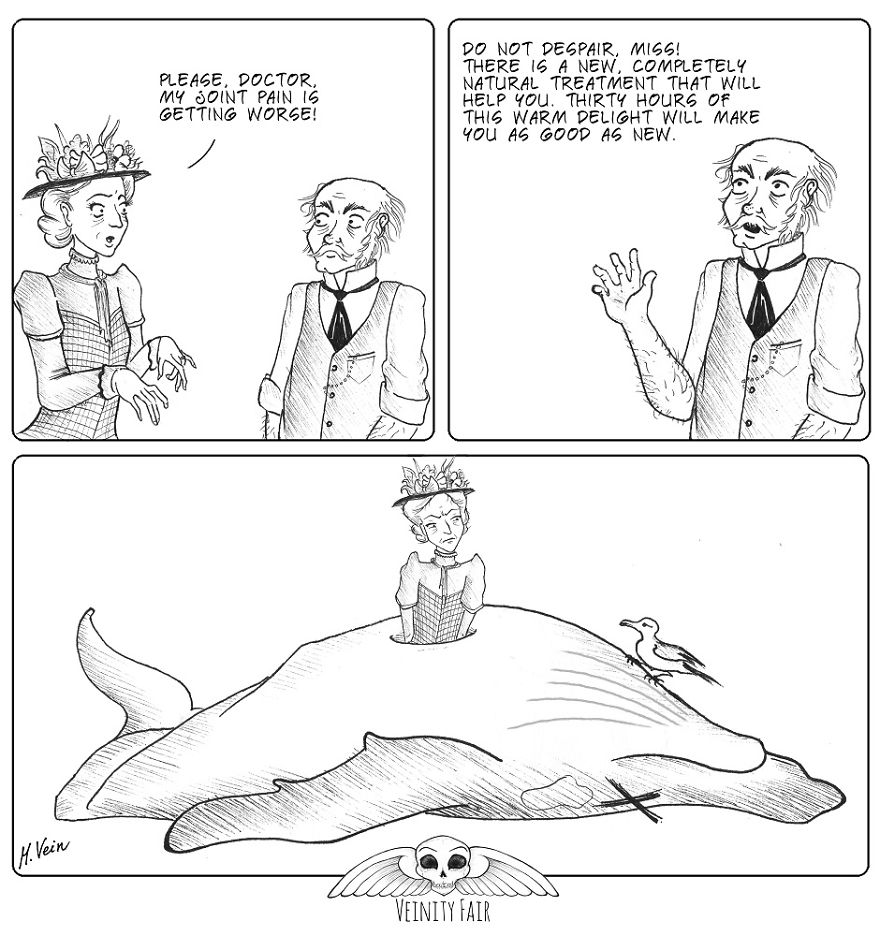 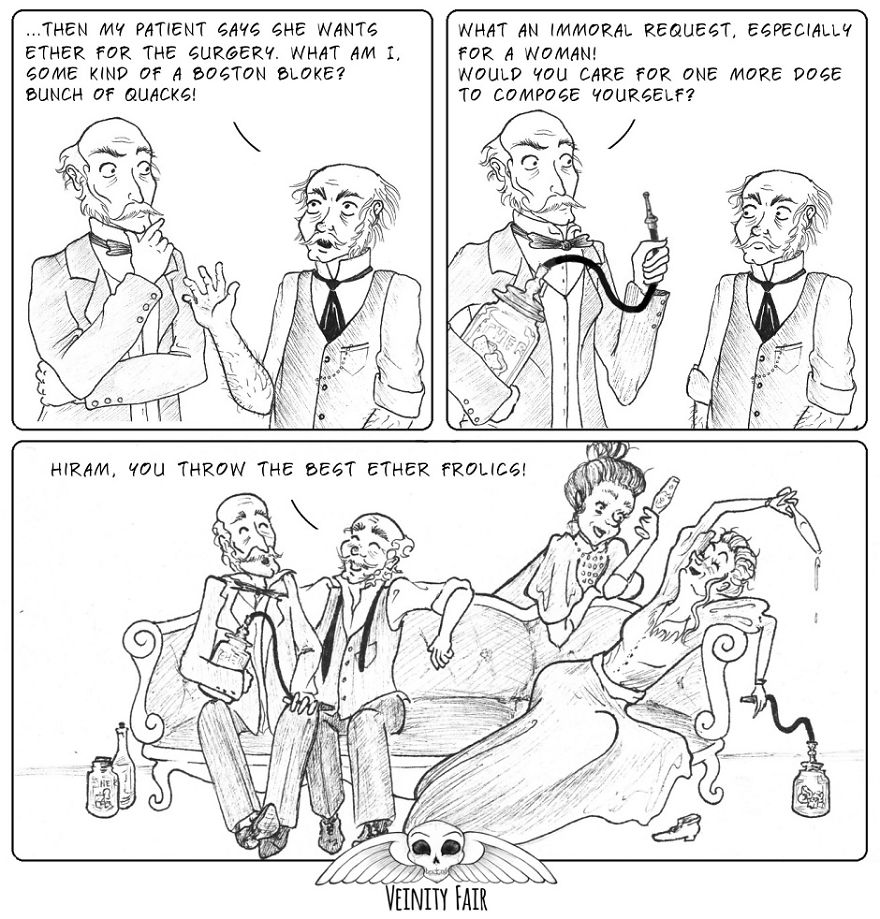 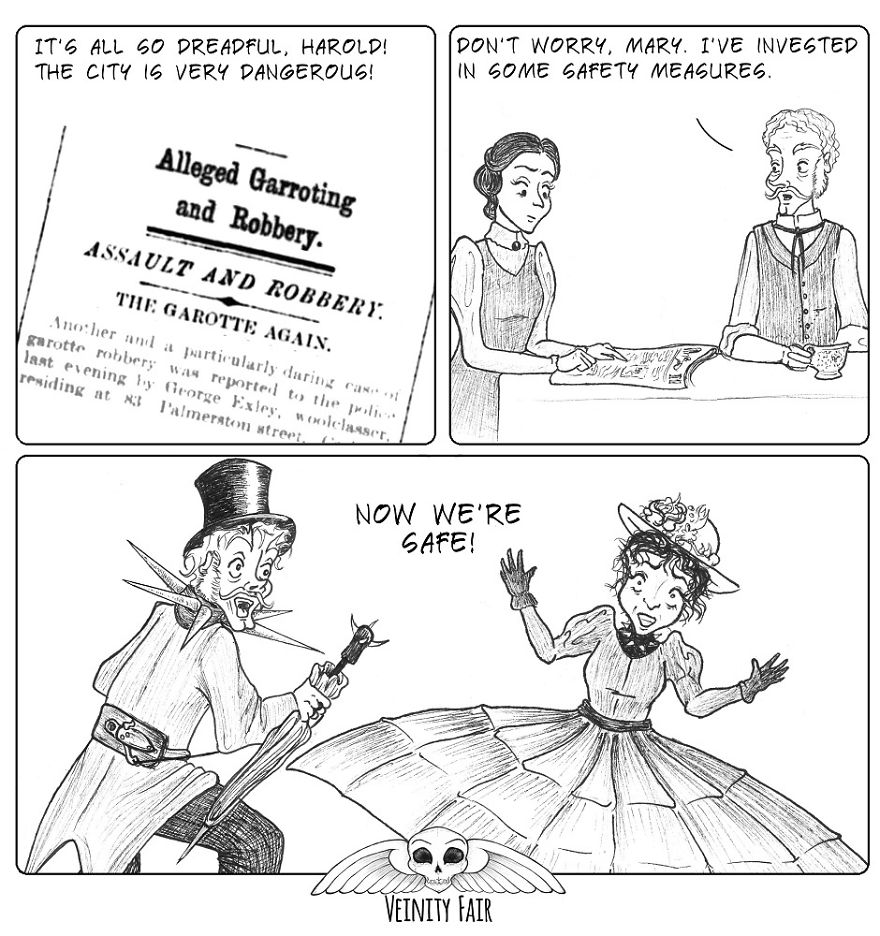 Garrotting panics and hysterias appeared in a few major cities in the mid-19th century. A few creative merchants quickly saw profitable opportunities in the public’s fear…