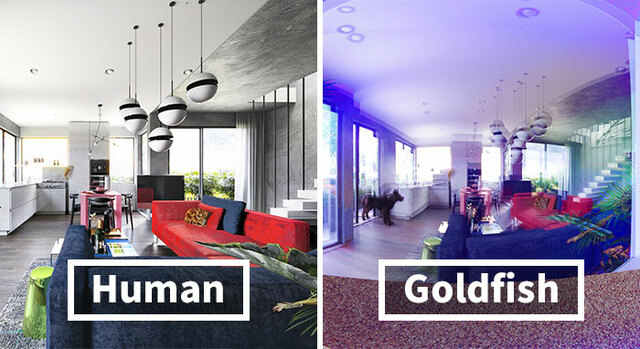 Here’s How 7 Pets See The Environment Compared To Humans

We’ve all heard that animals see the world a little different than you and I. But just how different? Well, your days of guessing are over, because Home Advisor just created a series of illustrations that perfectly capture how seven different pets see the environment.

Turns out that the way pets see the world varies greatly from one pet to another. For example, the way cats and dogs see their surroundings is rather similar to humans, with the main differences being a wider field of view and slightly murkier colors, while parrots and goldfish see color much more vividly. See these examples and more in the gallery below! 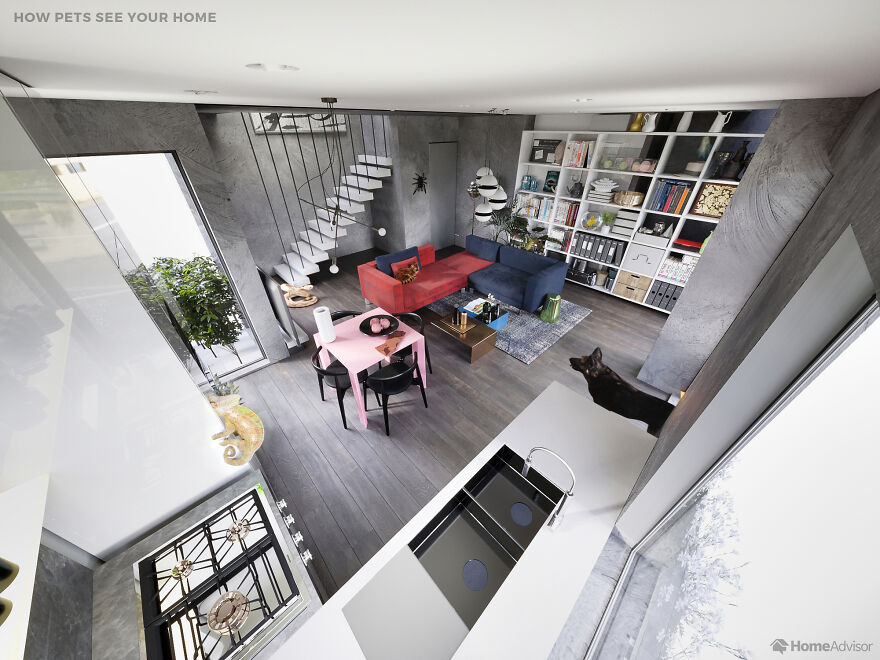 The project compares animal vision to a human’s 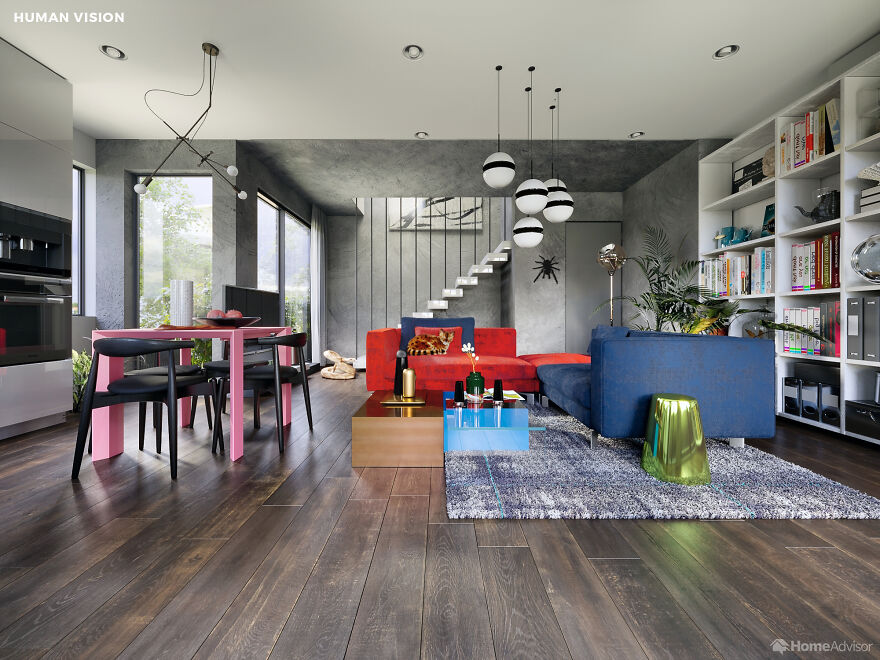 For example, this is how a dog sees the same room 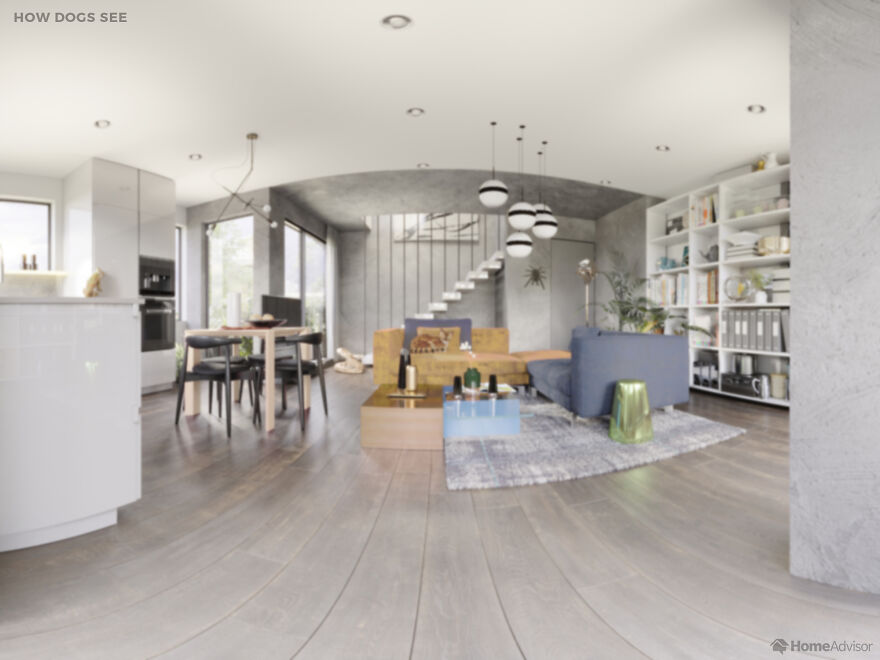 “Your dog will take just about any style you make at home and turn it into a pastel-colored coastal living kind of affair. Dogs see muted combinations of the colors filtered by their two-cone eyes: blue and yellow.” 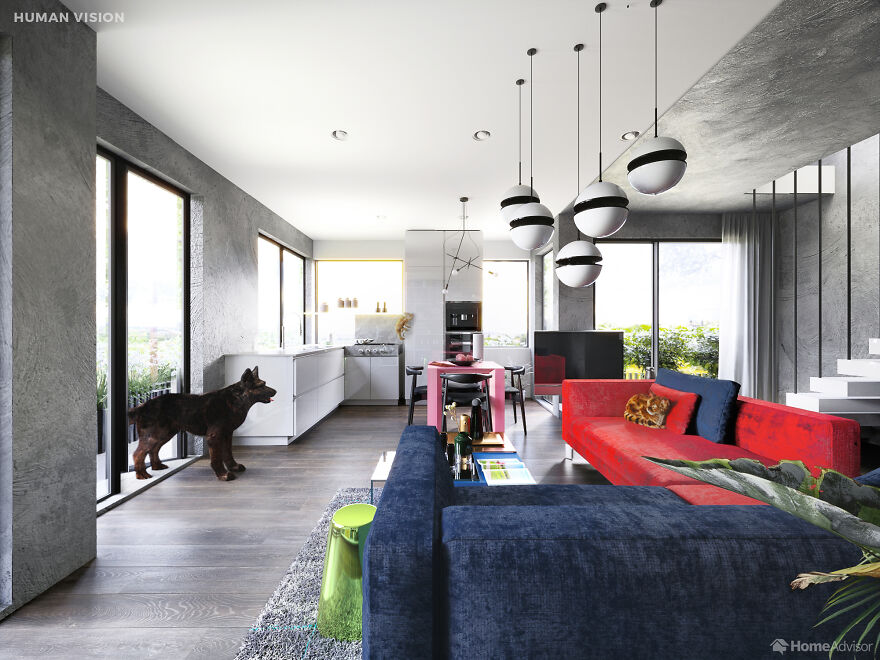 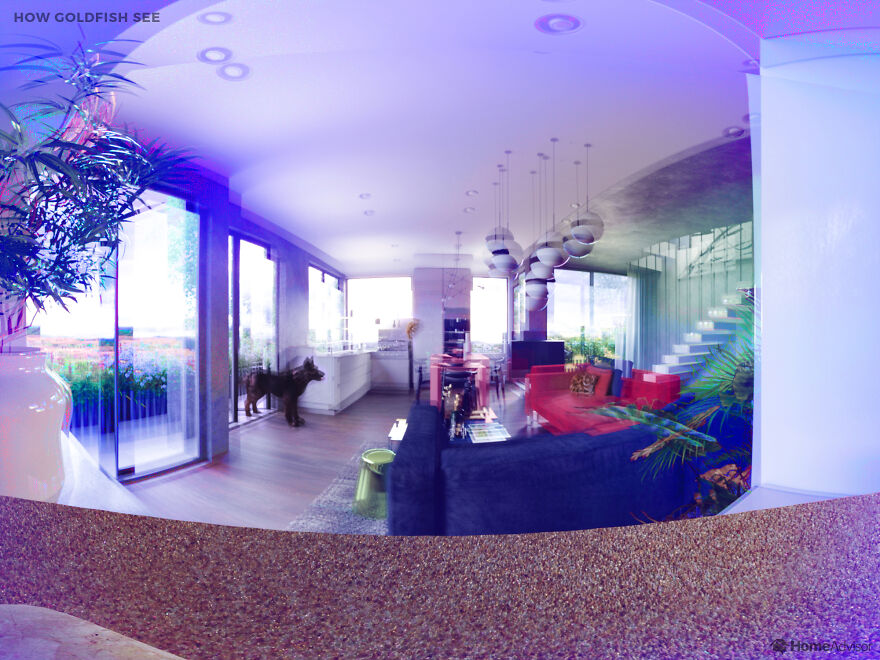 “If your goldfish turns its nose up at your new suite, it’s because she can see more colors than you. Her ability to see ultraviolet light helps her see in the water, but may also reveal where your dog has tried to mark its territory on the sofa.

Appropriately enough, a goldfish also enjoys a fisheye lens effect. Its round corneas gather light from an almost 360-degree canvas, and are almost the same density as water, compensating for the warping effects of light in water.” 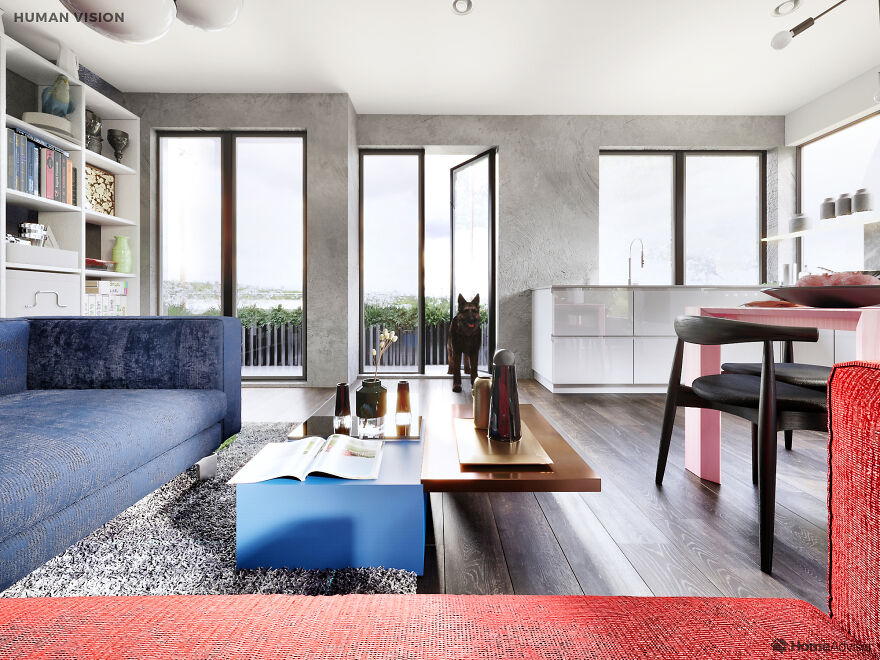 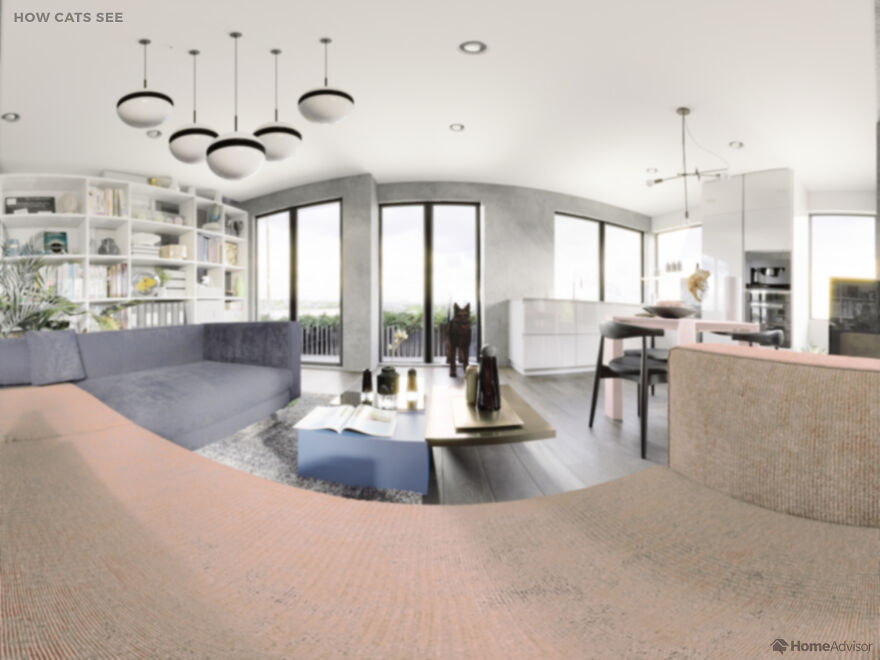 “Cats must see things differently to live the way they do. But existential outlook aside, a cat’s point-of-view is characterized by its excellent night vision. While humans have a high number of cones in our retinas, cats have lots of rods – a different type of photoreceptor cell, sensitive to low light.

Your cat has a wider field of view than you (200 degrees versus 180) but not quite as wide as that of a dog. Its color vision is somewhere between that of you and your dog, too, since it is a dichromat (has two color cones) that sees blues and yellows with a bit of green as a bonus.” 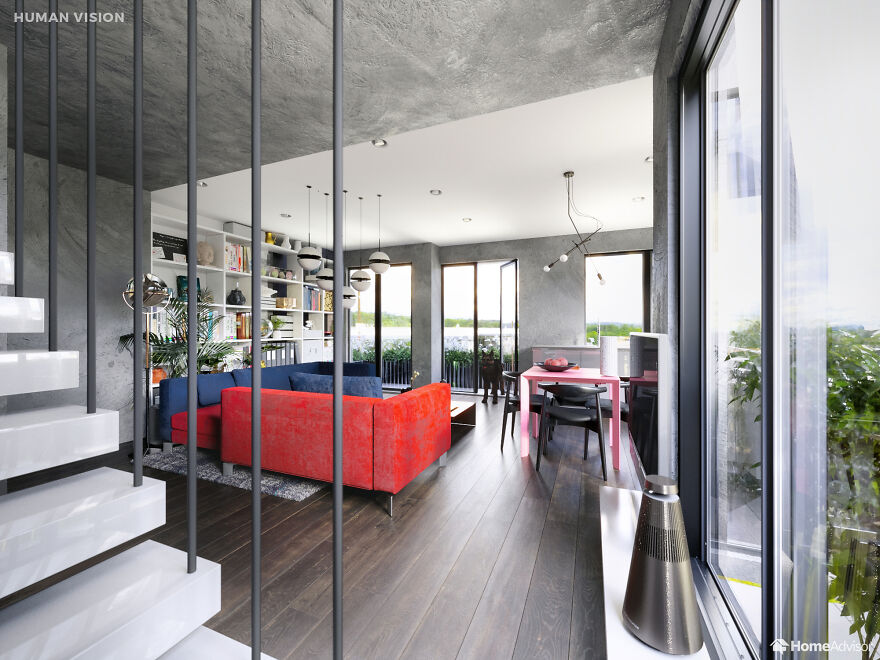 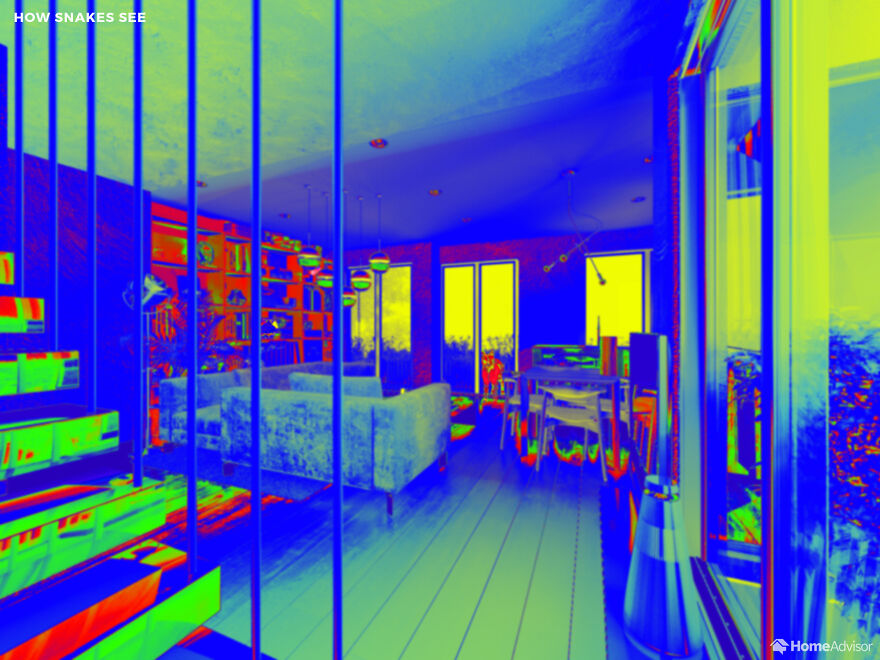 “If your only pet is a snake, you needn’t worry about the visual design of your interiors. Most snakes have very poor vision in daylight, although a good serving of rods means their nighttime vision isn’t too shabby.

The bonus for some snake species is infrared vision. Your snake may merge heat-detection data from its pit organs (thin membranes between the eyes and nostrils) with visual data to create an image that looks something like thermal imaging.” 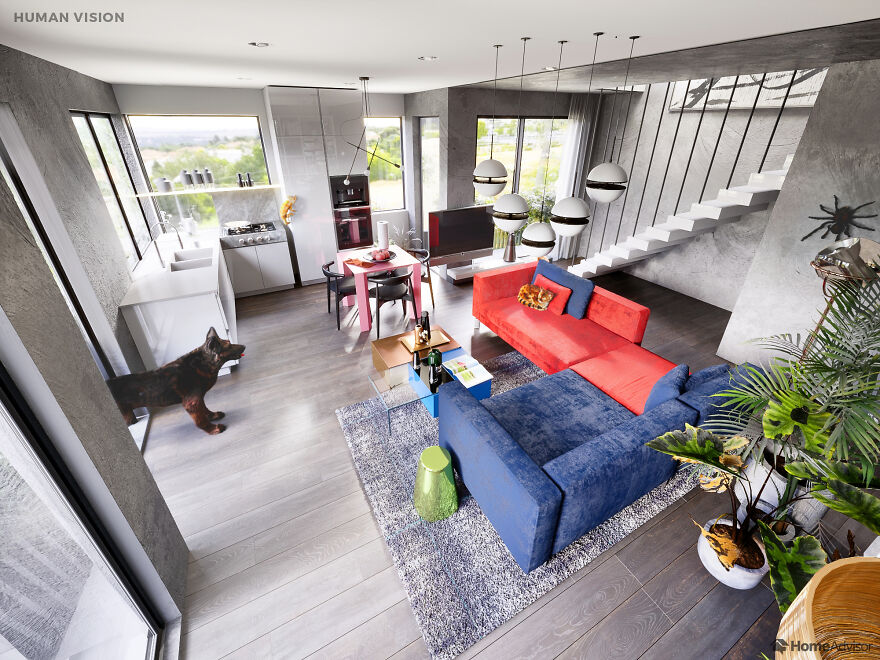 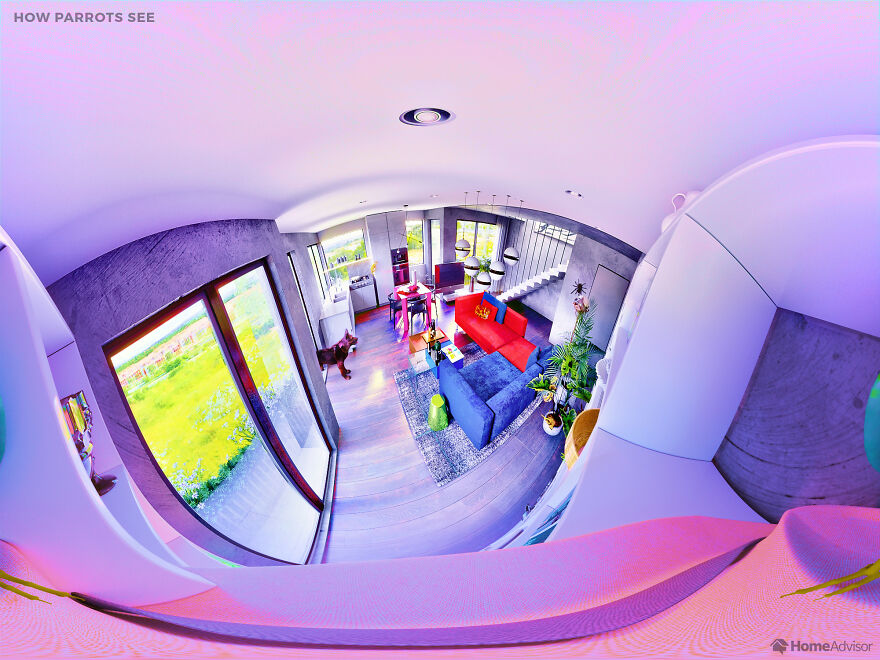 “Birds rely heavily on a highly effective visual system, and your parrot can see UV, blue, green, and red color ranges. In fact, the ‘violet’ color in this picture has been used to double for ultraviolet, which is actually colorless and invisible to humans.

Polly can also adjust her focus super-quickly and has near 300-degree coverage but monocular vision, meaning one eye focuses on one thing while the other wanders. She can also contract her pupils at will, for example, if she doesn’t dig your new lampshade.” 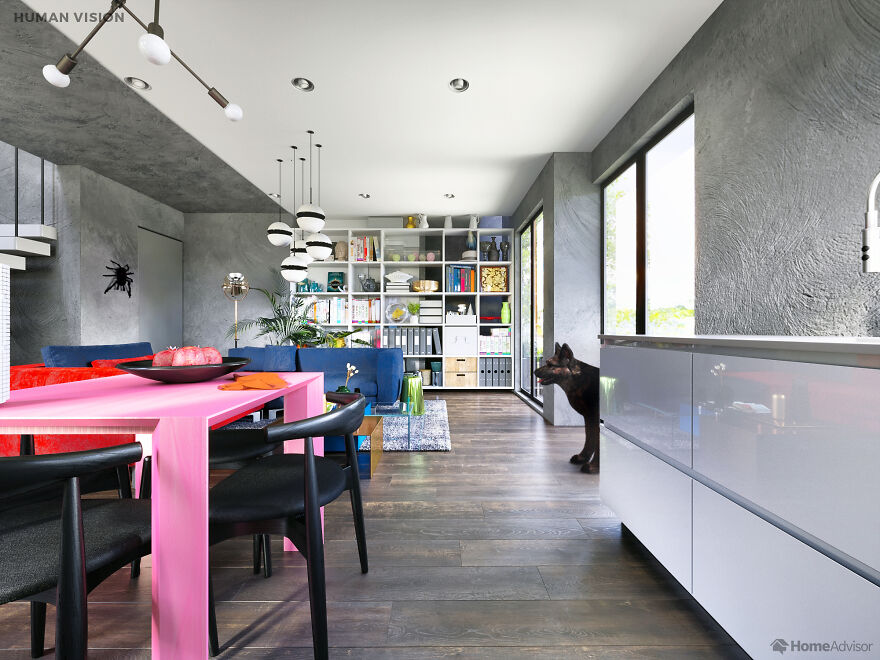 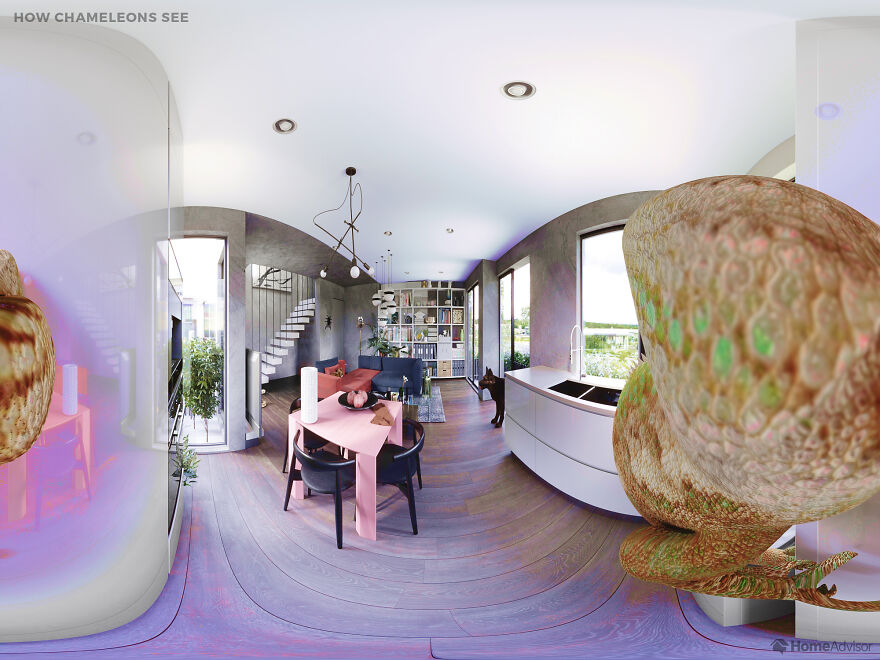 “Who cares more about your choice of living room palette than your pet chameleon? Not only does he absorb, transform, and re-emit color (changing to regulate temperature and communicate), his eyes are almost all ‘cone’ and no ‘rod,’ so he sees lots of colors (including the ultraviolet spectrum) but little contrast.

Your chameleon’s eyes operate independently on little turrets so that he can watch for predators across a total field of vision of 342 degrees. If you need to creep up on him to grab your copy of Wallpaper back, you’ll find he has a blind spot of 18 degrees just behind his head.” 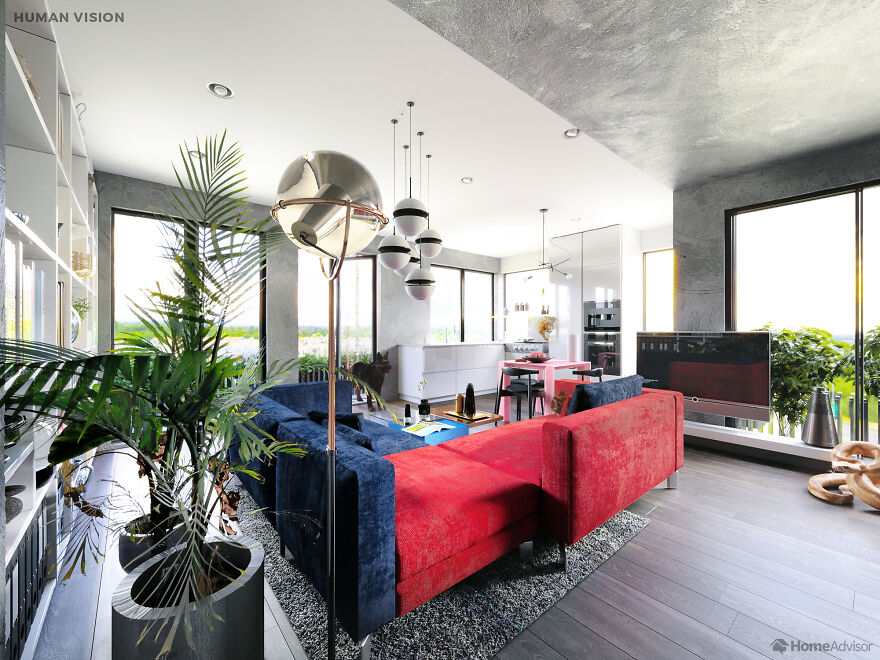 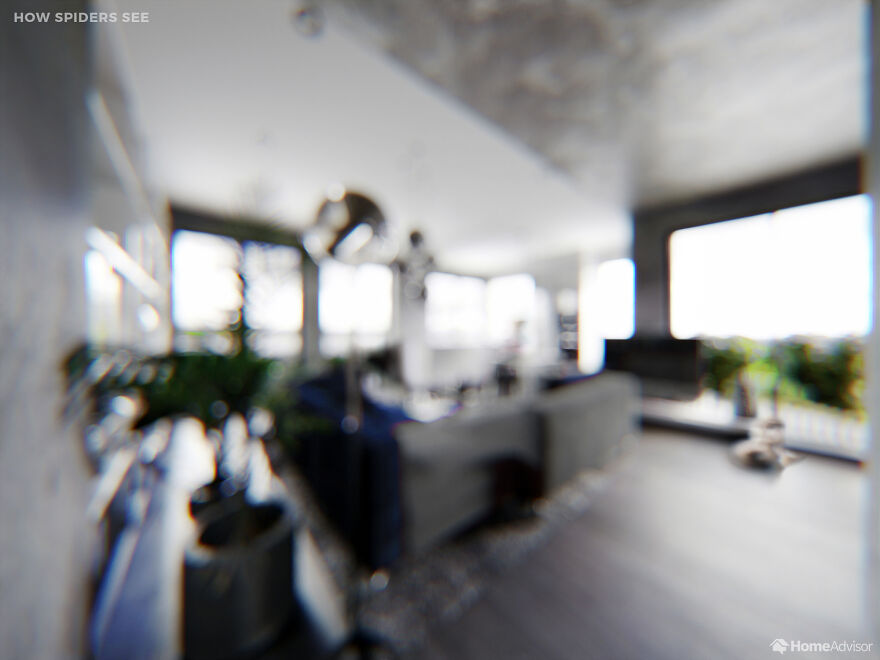 “Most spiders have eight rather feeble eyes and rely more on their hairy legs to feel their way around.

However, researchers have recently noted the color-sensing structures of opsins (a type of protein) might make them sensitive to color, and might be used to find mates. So if you notice your tarantula getting frisky with a bright blue ashtray, you know that science is on to something.”

This is how different animals see the same place 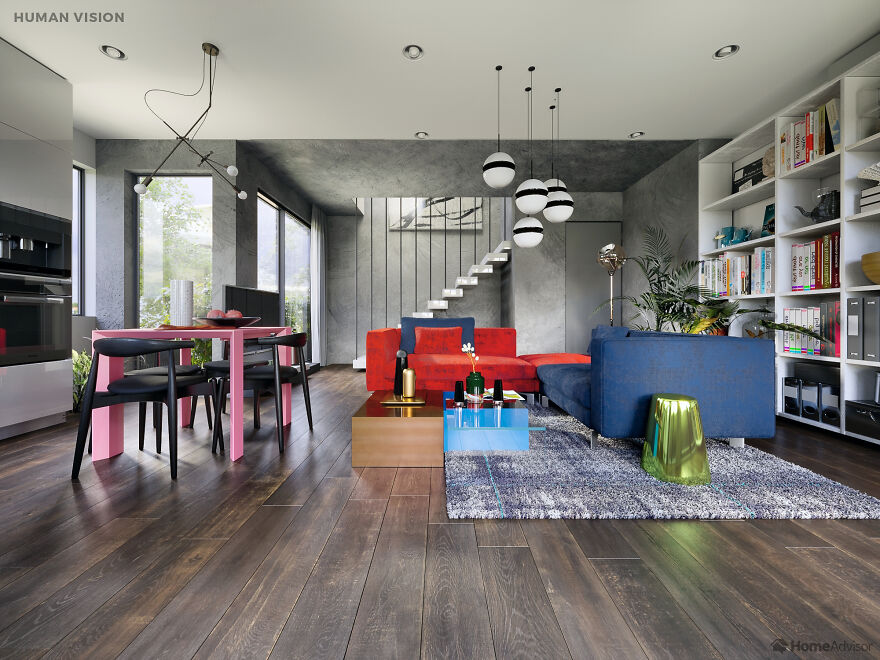 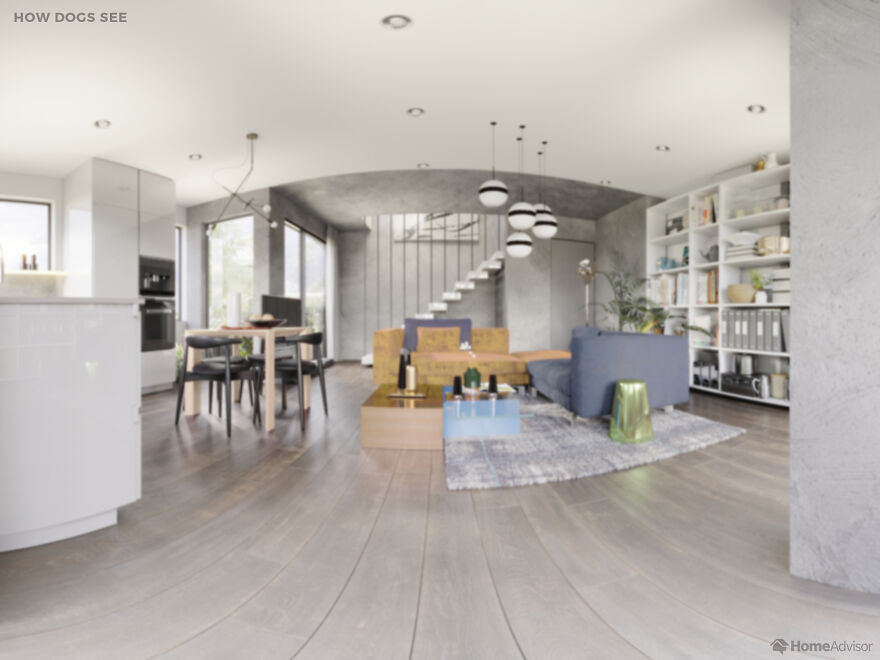 In a recent interview with Bored Panda, Lee McCullagh, one of the designers behind the project, said that it was inspired by people’s search history. “Every month, thousands of curious animal lovers google ‘what pets see,’ and whilst the results are fascinating, it’s sometimes hard to compare their different types of vision, as all existing images focus on different landscapes and images,” explained the designer. “By leaning on academic research, HomeAdvisor decided to combat this and answer the question by placing 7 different types of pets into one virtual room so readers were able to see how different pets see our homes through a unique lens.” 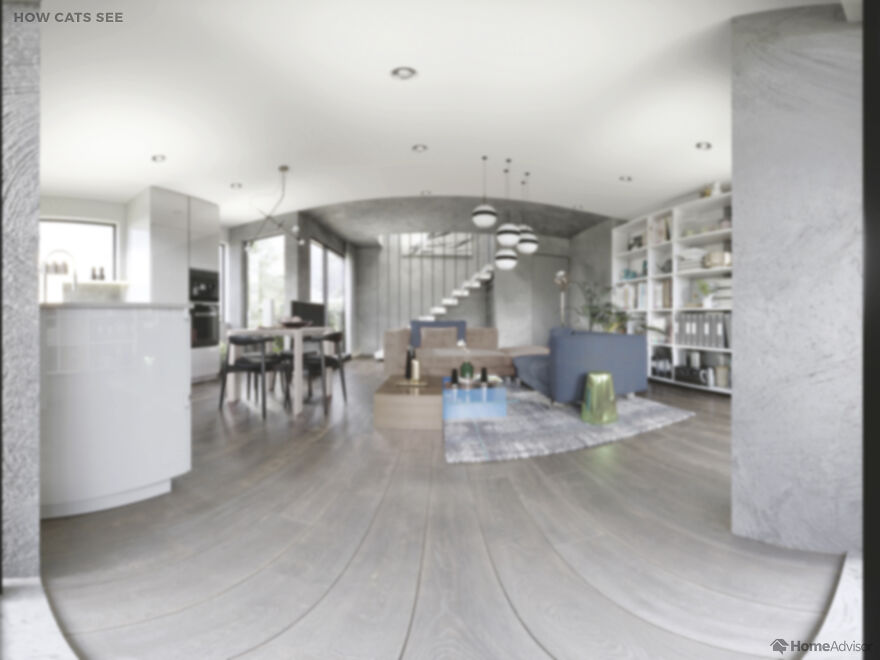 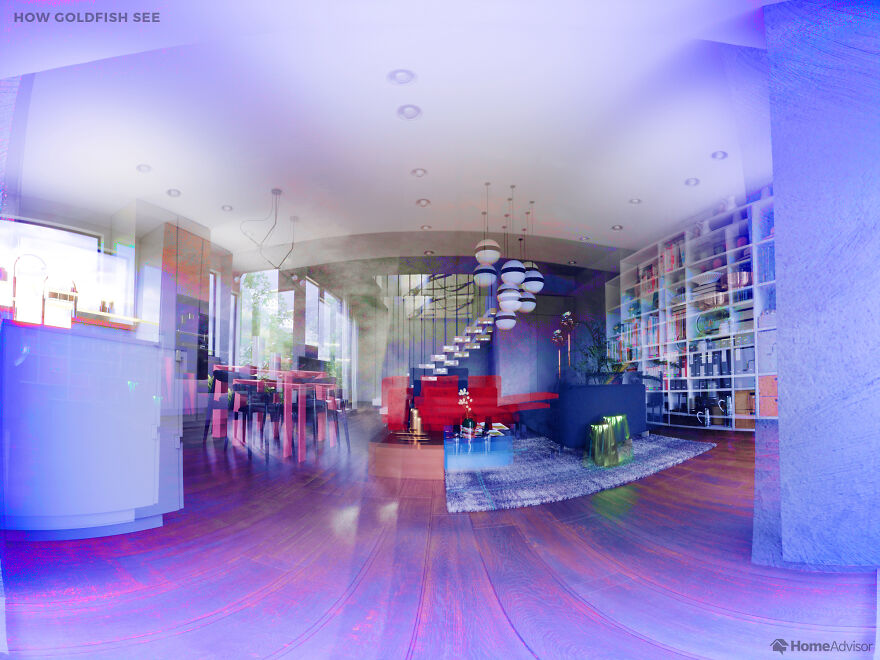 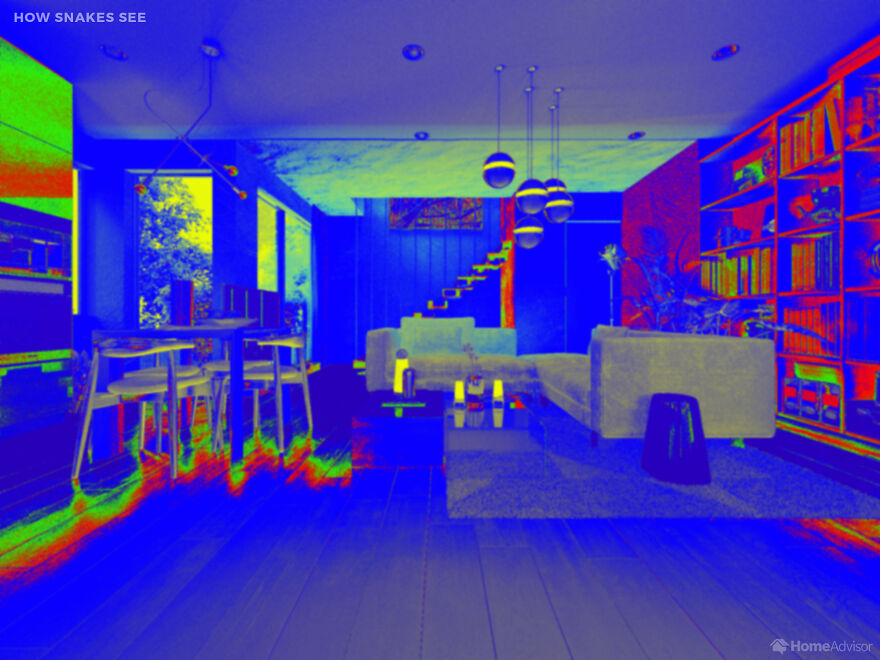 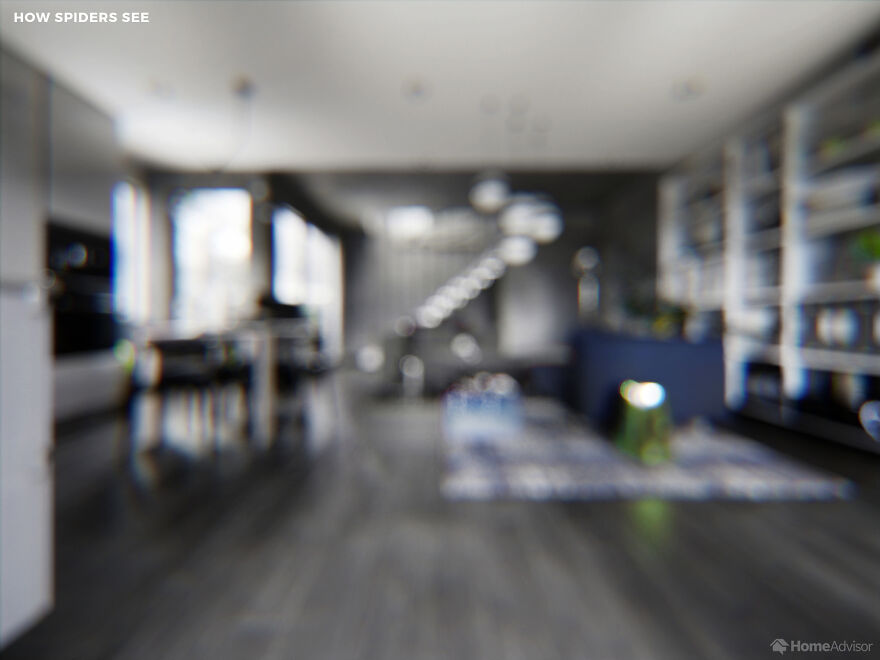 “Whilst we were armed with the latest scientific findings, no one has ever viewed the world from an animal’s point of view,” explained Lee. “So, sometimes the garish colors made us second-guess whether an animal really did view the world in such a way, but after rereading all the findings, we were confident with the results.” The designer says that the chameleon was hardest to portray as it was difficult to both visualize a 342-degree viewing angle, and incorporate the ultraviolet color spectrum. 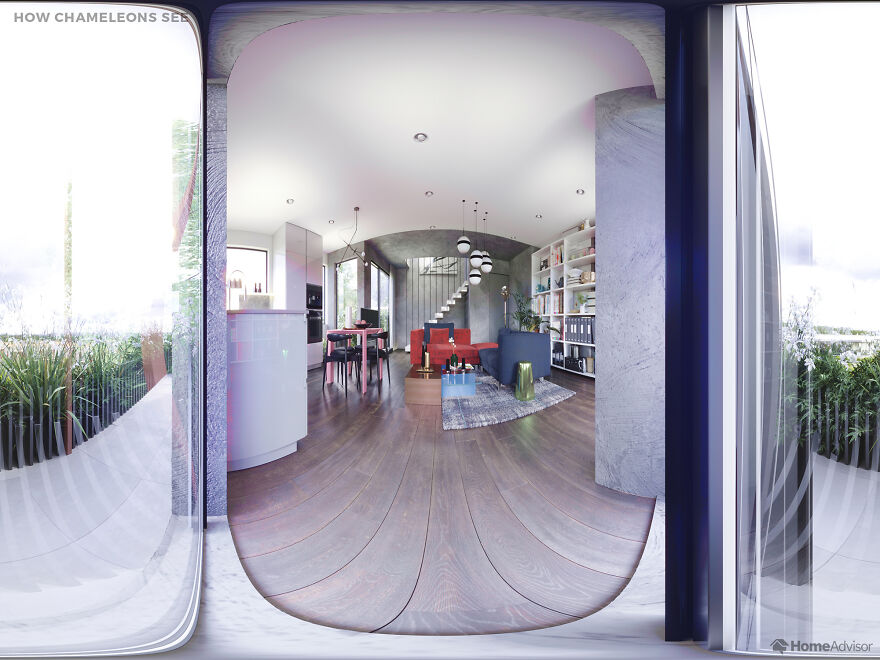 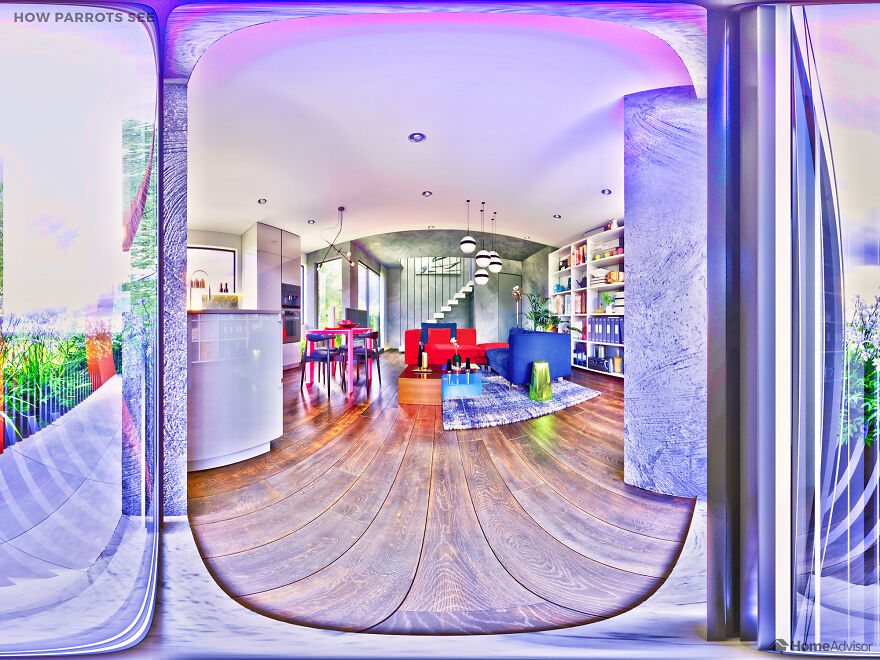