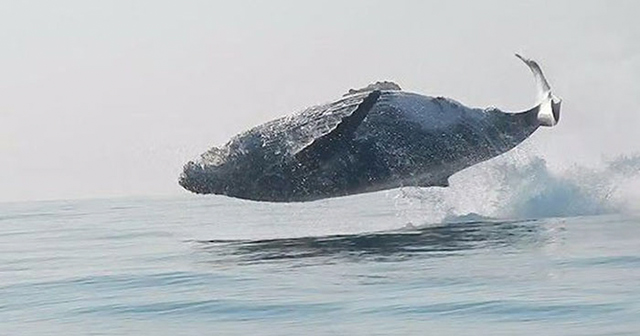 40-Ton Whale Was Just Filmed Jumping Completely Out Of The Water, And The Internet Is Amazed

Some photographers are luckier than the others, and Craig Capehart is a living proof of that. Because recently on his whale watching trip in South Africa, he managed to snap a rare video of a giant humpback whale taking a breather while fully jumping out of the water.

A 40-ton giant was filmed in the Indian Ocean off the coast of Mbotyi by Craig who at the time was sitting in a “rubber duck” inflatable boat when the acrobat started its show. “It seems that never before has a recording been made of an adult humpback whale leaping entirely out of the water! A very rare event, indeed,” wrote Craig alongside his video. “Dolphins and even Great White Sharks have been seen flying out of the water, but this is a first for an adult humpback whale!”

Check out the clip below, stitched together with many more whale acrobatics.

If you liked it, then also check out this rare shot of Sperm whales sleeping.