Artist Photographs Happy Childhood Moments Of Kids Around The Block

Children have an almost supernatural ability to be happy. And Adrian McDonald took some time to photograph the joyous daily lives of his neighborhood children. Adrian lives in Jamaica, the rural parish of Westmoreland. He noticed children from a large family laughing and playing in their backyard, which lead to this photo series. Considering himself a philosopher artist, he mostly let children play without any interruptions, capturing natural moments of their day. In fact, he often used 180mm 2.8 or 85mm 1.4 lenses, so the children didn’t even know he‘s taking pictures.

“As a philosophical photographer I normally rely on an innate sense of inspiration to create stories.” McDonald wrote on Bored Panda “My neighbor’s kids resonate with that idea wonderfully and so I expressed the concept to their parents. I got secretly document their everyday lifestyle.” It seems to have paid-off wonderfully.

Why even stage children portrait scenes if they can be so naturally charming? 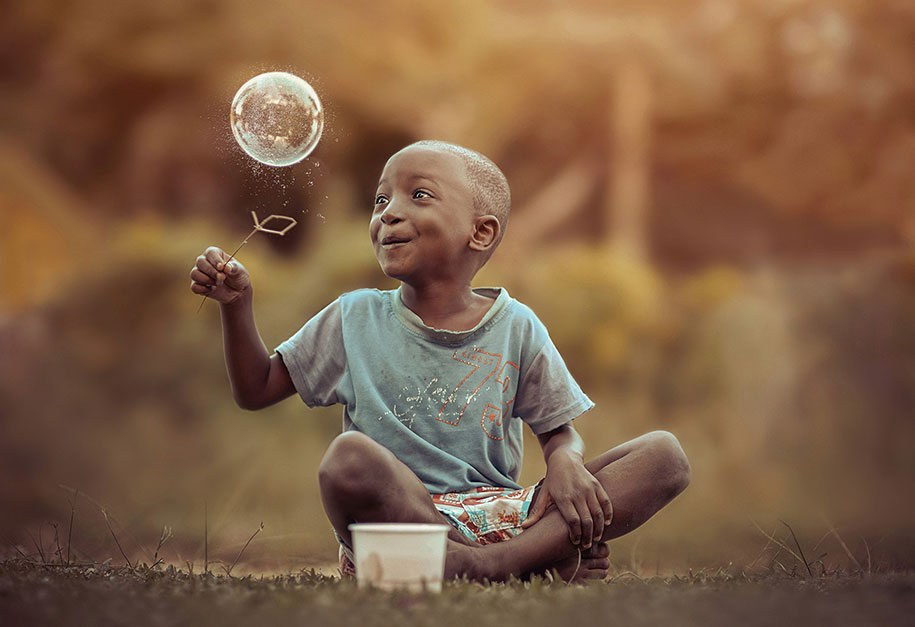 He tried so hard several times to get a bubble going from his make-shift bubble blower. He finally got through after about his 10th attempt. That is the face of appreciation and adoration. 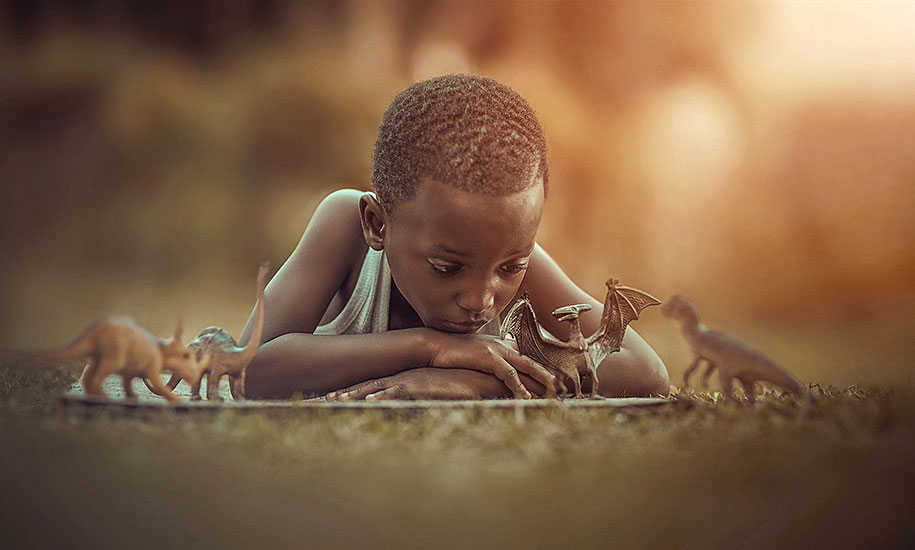 I have no idea what was going through his head as he laid in the grass playing with his dinosaur toys. This is pretty much a regular evening routine for him. 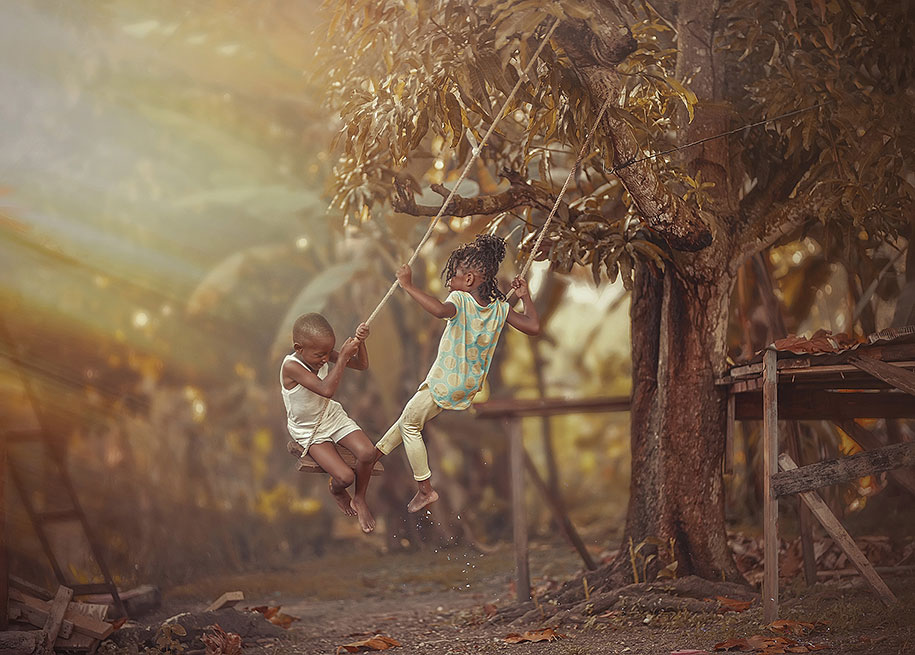 One of my favorite shots of them playing. This is pretty much the routine for them every evening. As soon as they get home from school, they’d run outside to one of their favorite spots – the swing. 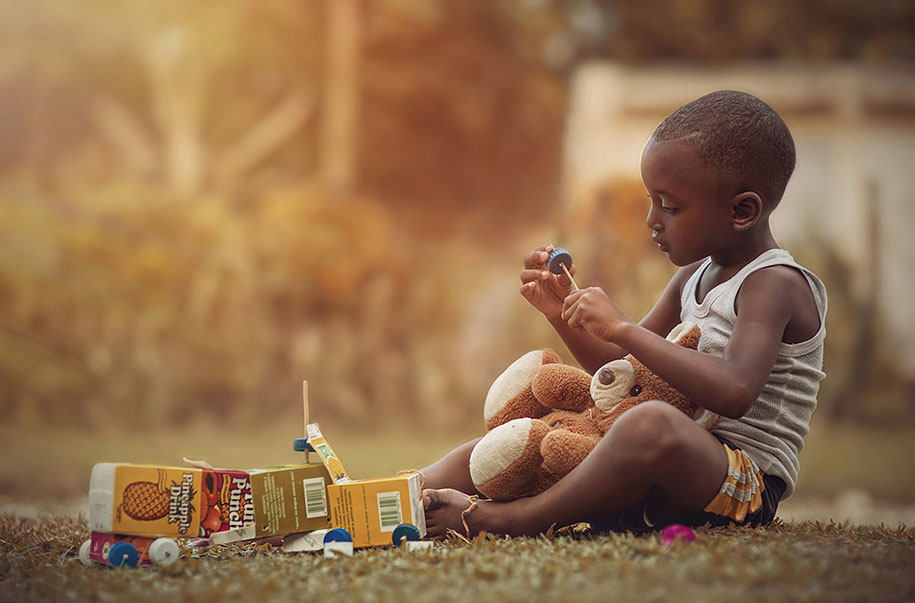 Most times my little friend here is by himself tinkering away at things. This shot was caught with him putting together his box truck in front of his home. Sometimes his mom would call me secretly and let me know something is up. This was one of those moments. 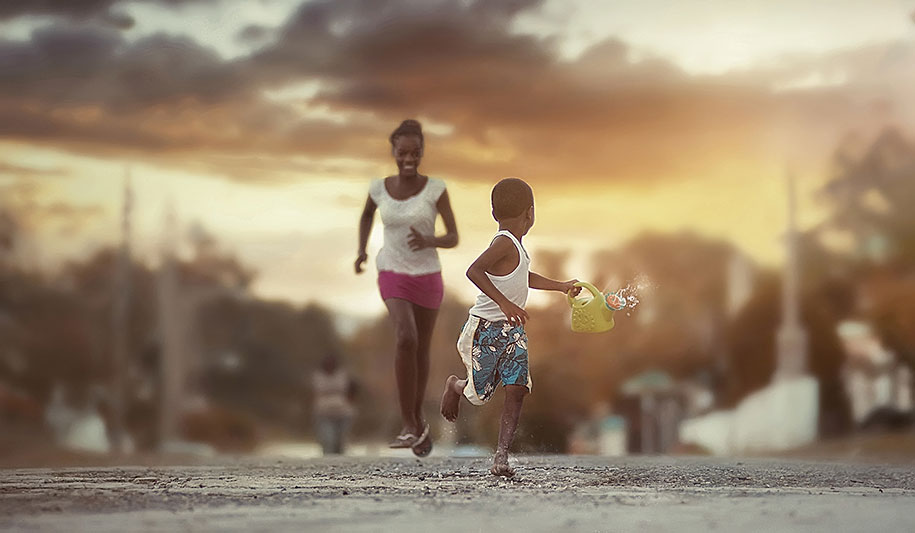 I remember the evening this was taken like it was yesterday. It was one Sunday back in December of 2014. I walked out of my home as I had done several evenings before, looking for some stories to shoot. Suddenly I heard a scream echoed, I looked up the road and there they were bolting down the street. I quickly reacted, ran out and shot this from about 80 meters away from them. I’m really glad I had the 180mm that evening. If I had my 85 I’m sure I would not be typing these words. 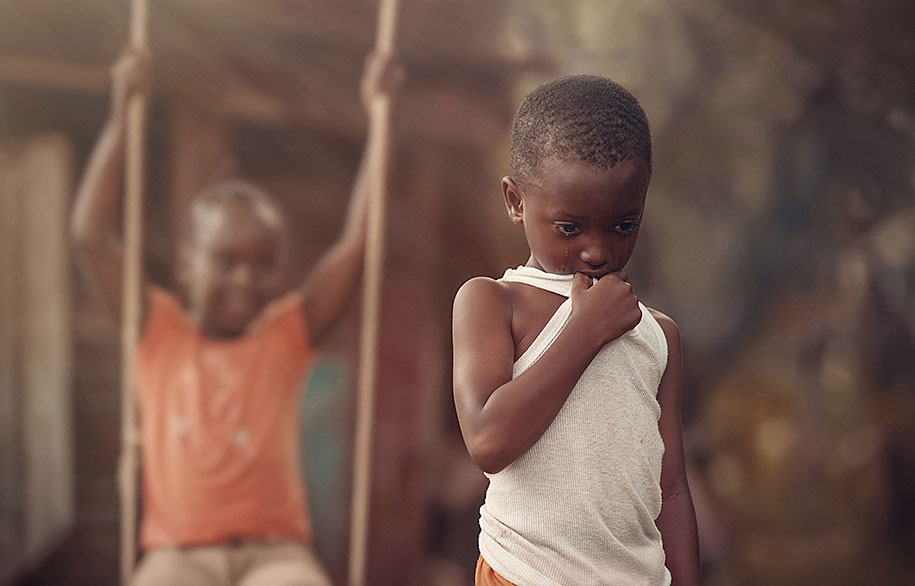 His cousin in the background wouldn’t allow him to take his turn at the swing, he lost a bet to her because she was able to swing higher than him.

I Got The Swing 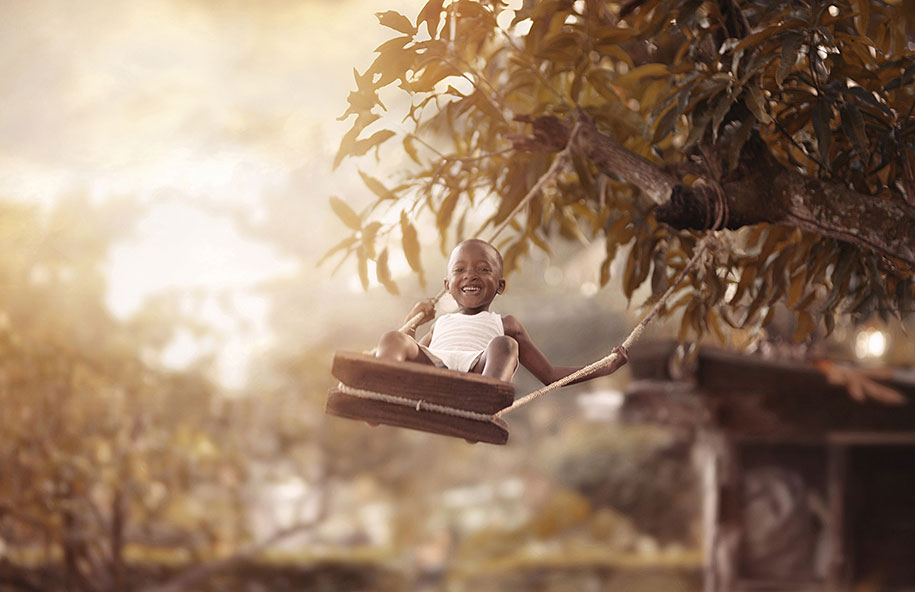 So… I spoke with the cousin and asked her to let him have a swing and this was the result. Look how happy he is! 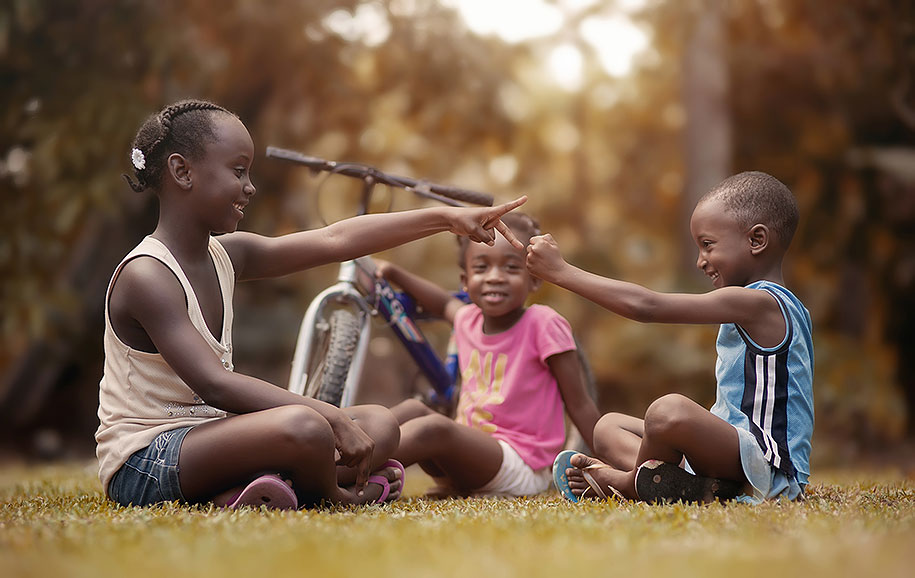 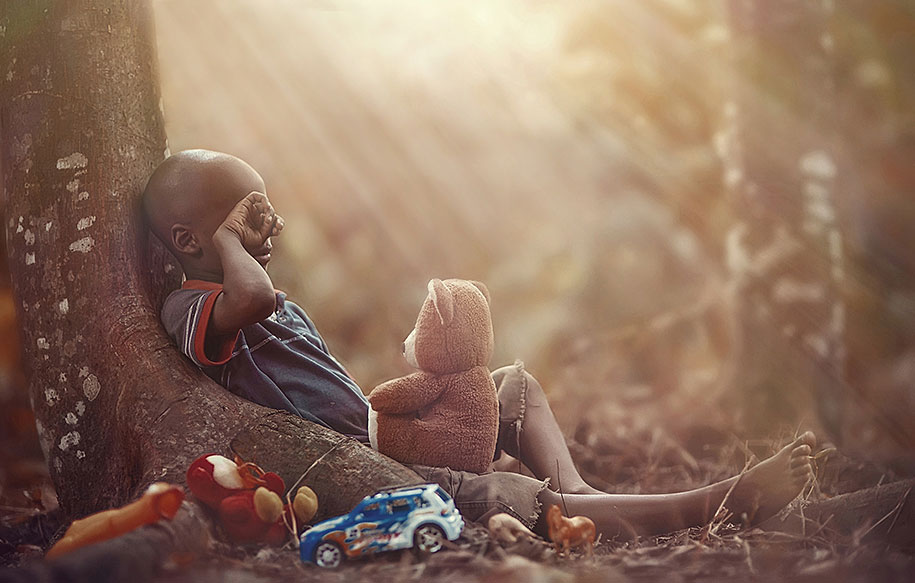 Sometimes even kids get bored. 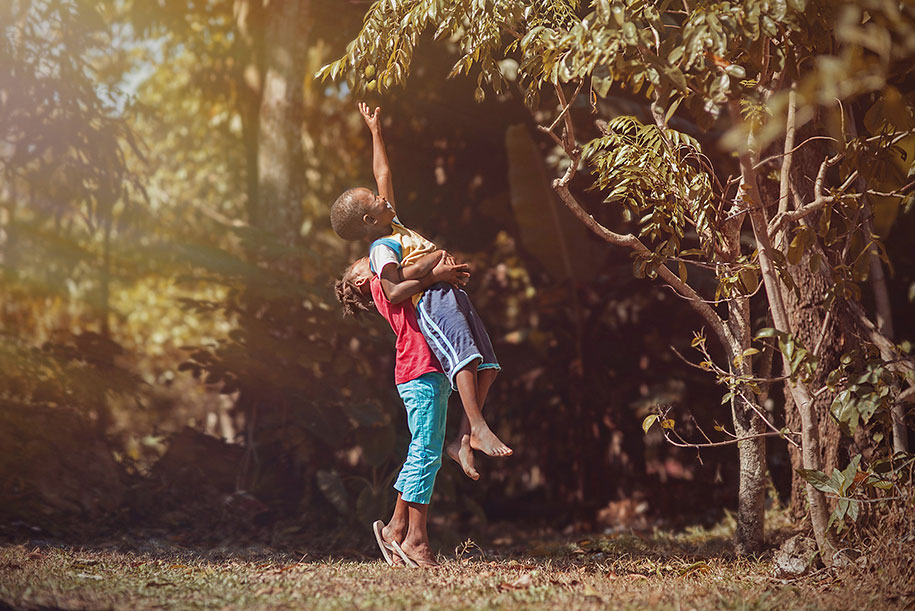 Sister and brother working together to pick a plum. 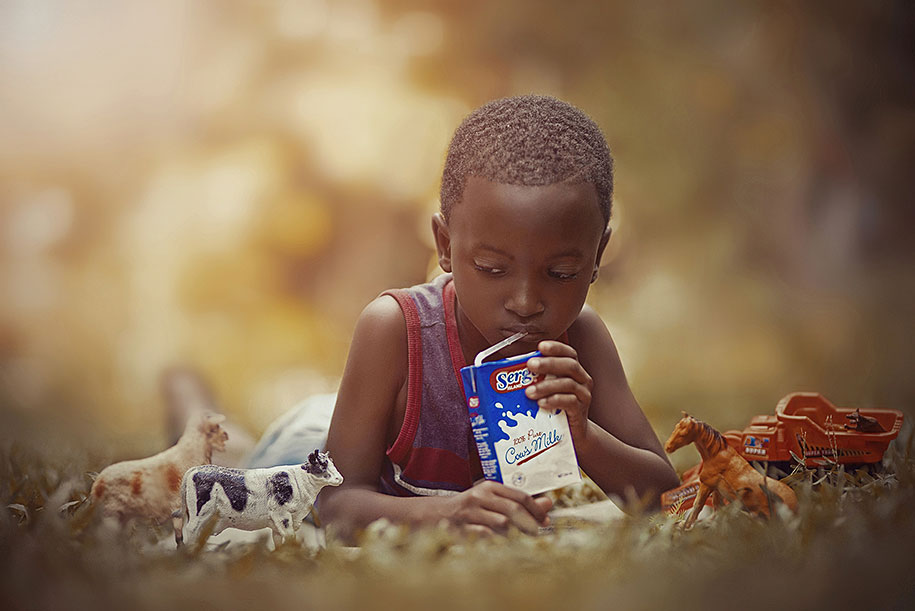 Oops, didn’t see that coming. This was actually one of the only scenes I conceptualized with him. However I had his sister place the cow in the scene immediately after he started drinking so he had no idea the cow would be involved. I wonder what he was thinking. 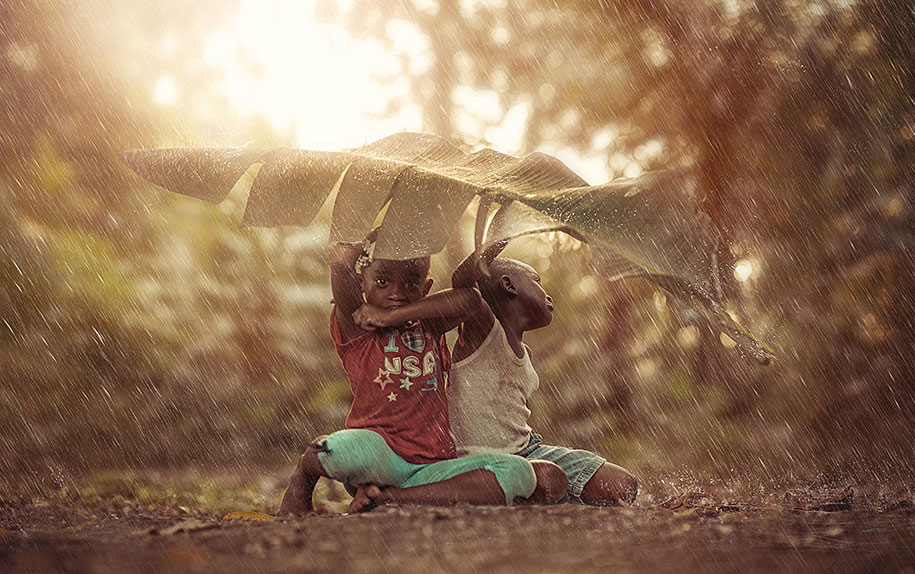 On this day they were outside already playing with the banana leaf with a bit of rain just barely falling. An ounce of inspiration hit me and I thought, “Hmm as a child my friends and I normally shelter under banana leaf from the rain.” I asked them to sit and continue the sheltering process. When I got in to edit I realized the rainfall was barely showing as the tree leaves above had broken almost all of its falling effect so I dramatized (rainfall) it in Photoshop. They still played the part well huh?