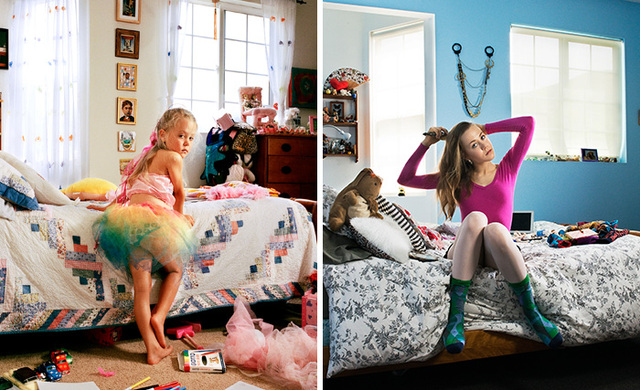 Beth Yarnelle Edwards has created a photography project back in 1997 in her local area of San Carlos, California. Her goal was to document the everyday lives of families in suburban America. Her project revolves around the well-known idea of an ‘American Dream’ and the actual lives people live in the USA.

The project started as a response to her own dissatisfaction with suburban life, so she set about discovering what makes it appealing to so many people. “I felt isolated and trapped, but I realized that the people around me really loved being there,” she told TIME magazine. Beth interviewed people around her to create a full picture of a life is so often overlooked.

Her project continued 20 years later when she returned to the families she captured to see how their lives have changed. But Beth was surprised by how stable the lives of some suburban families can be, with many aspects remaining unchanged. “This population is kind of blessed,” she said. “This isn’t how the larger population lives.”

Scroll down to check out some photographs from Beth’s project below!

Photographer Beth Yarnelle Edwards, famous for her Suburban Dreams series, is now on a mission to recreate pics with the same families 20 years later 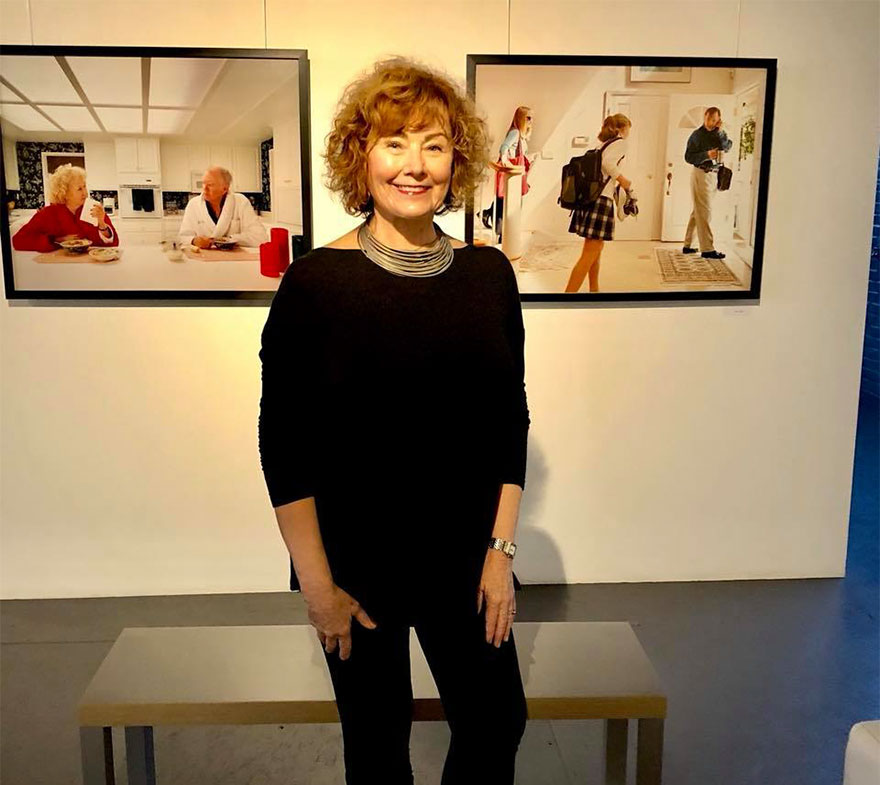 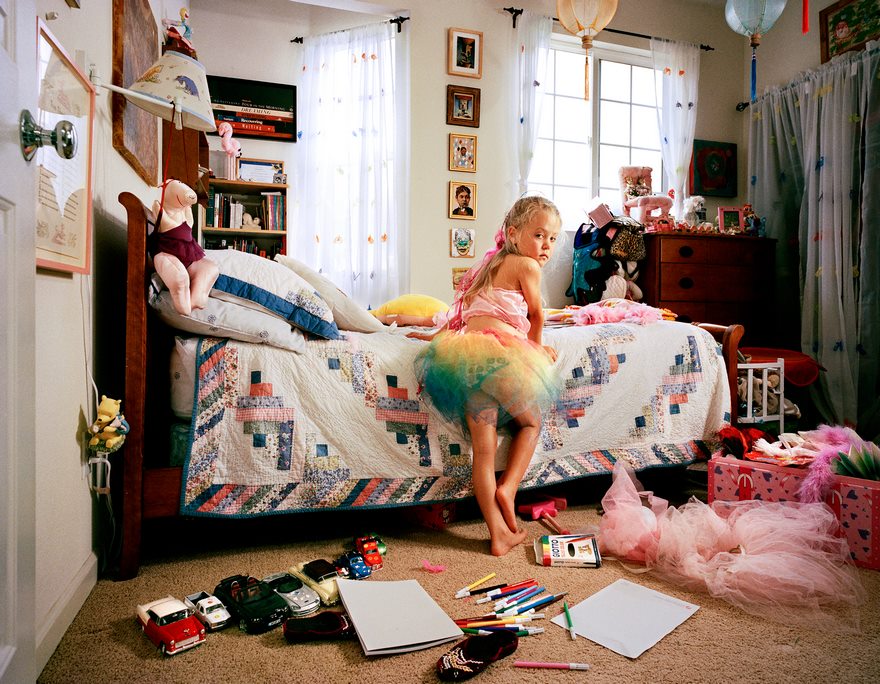 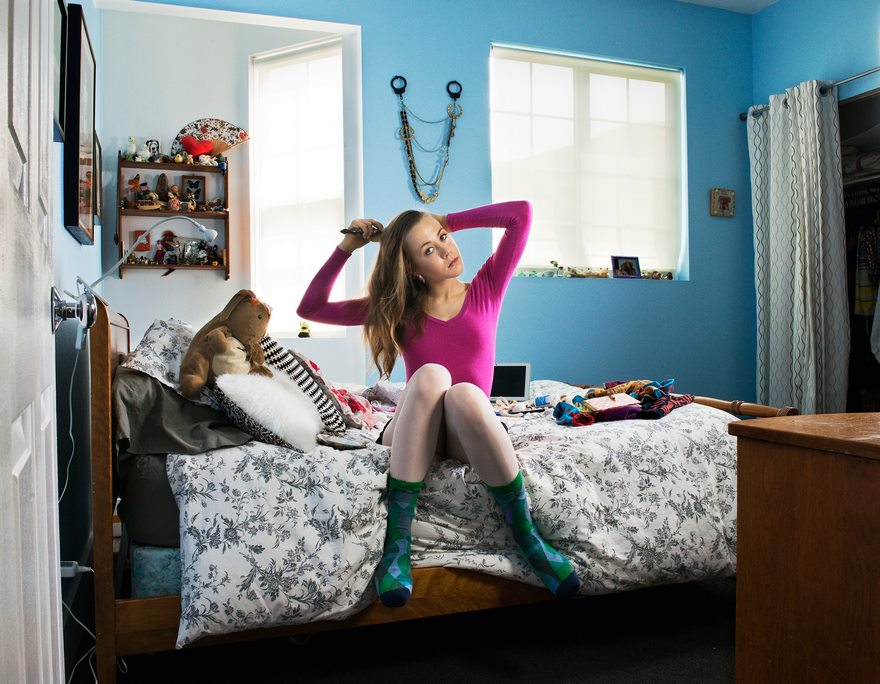 “A year after the second photo, I am a senior in high school. It’s my first year at an online school because my ballet schedule doesn’t allow me the time to attend a brick-and-mortar school. I do ballet from 8 a.m. to 4 p.m. I have a lot of schoolwork. I spend very little time in Brisbane, where my mother lives and where both photos were taken, because my parents are divorced and my dad lives in San Francisco, and also because the San Francisco Ballet is located in San Francisco, and because all my friends live in San Francisco.
I still love clothes and fashion. I also love cooking. I still spend lots of time at my mom’s art gallery, but now I work for her on the weekends. I also still spend almost every weekend with my grandparents, cooking, swimming, and reading. Life is crazy and busy and overwhelming, but also exciting.
Deciding I wanted to become a professional ballerina is probably the biggest change in my life since the first photo was made. Also, my parents’ divorce is something that I definitely didn’t see coming in 2004 and that drastically changed my life. For smaller things, my friends have changed, I have my driver’s license, and I can, sort of, speak Spanish!” — Lilah 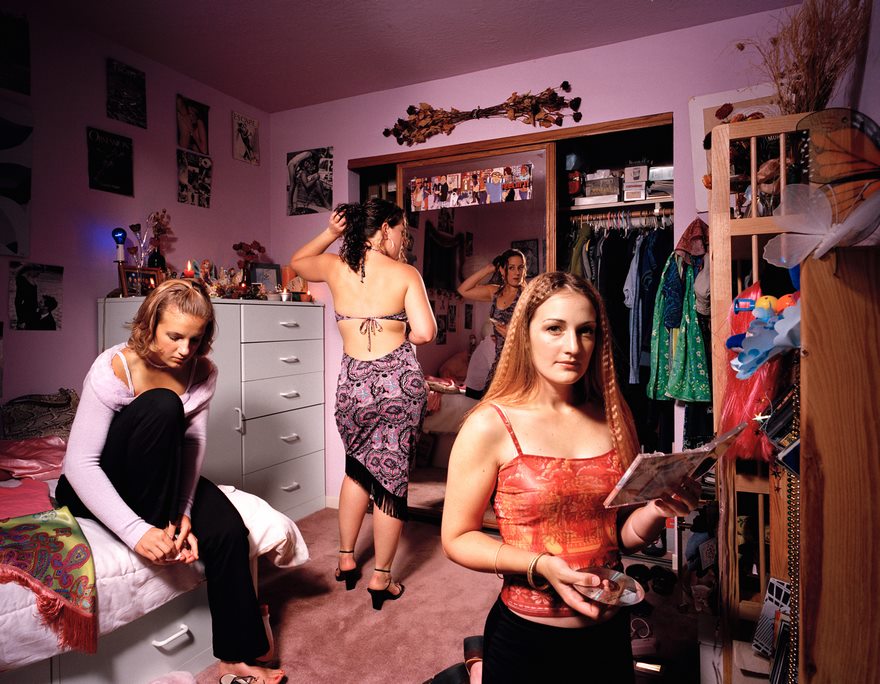 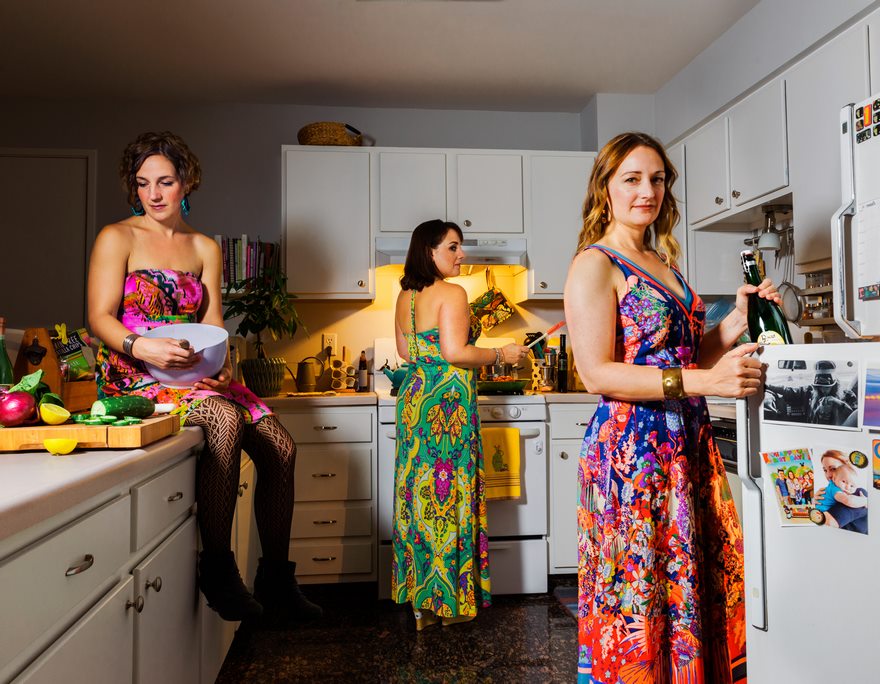 “My sisters and I grew up with parents who prioritized family and who made sure that we maintained a loving relationship with one another. Our mom used to say, ‘You can hate me, but you can’t hate your sister. You’ll need her. She’ll be your best friend someday.’ It’s true! We share a sense of humor that can usually get me out of a bad place in a matter of seconds. Our parents still live in the house they got married in 1975. They remodeled it a couple times, from a small bungalow to a larger but simple home to fit their family of five more comfortably. Even after they remodeled, and we each had our own room, we still chose to sleep in the same bedroom together for the first few years. And dinner was like a sacred act. Every single night we sat down as a family, 99% of the time made from scratch by our working mom, and often with produce that our dad grew in the garden. Dinnertime was when we talked about school or work, complained, laughed, cried, shared advice, and got into fights.” — Lucia

“We are beyond lucky to have our parents. They raised us to be close, to look after each other, to be honest with each other, and I think that gave us a really strong foundation for our relationships with each other. We grew up in an environment where the truth — whether it was difficult, uncomfortable, or ugly — was valued, along with education, community and family, above all else.” — Niki 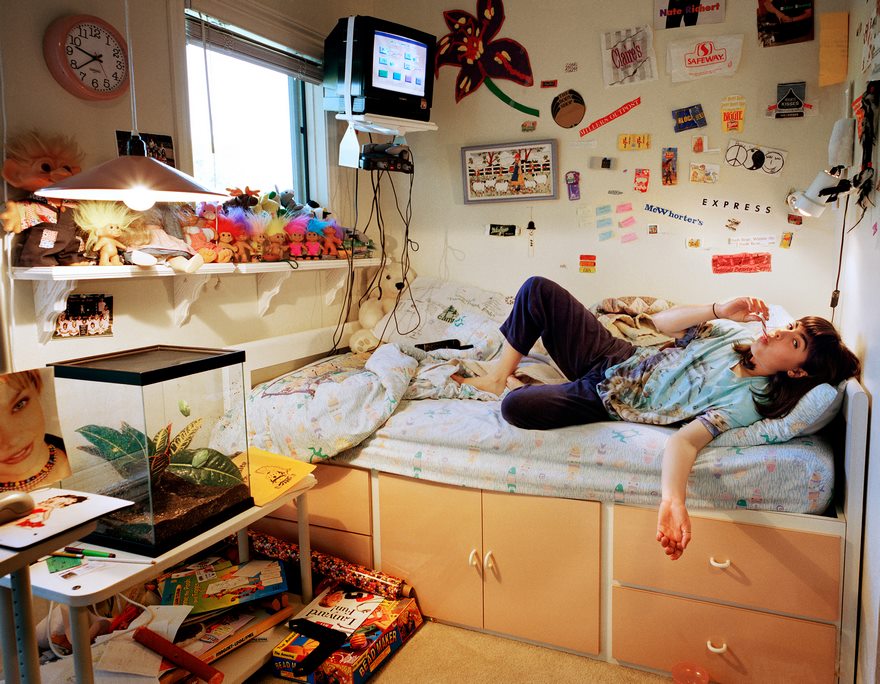 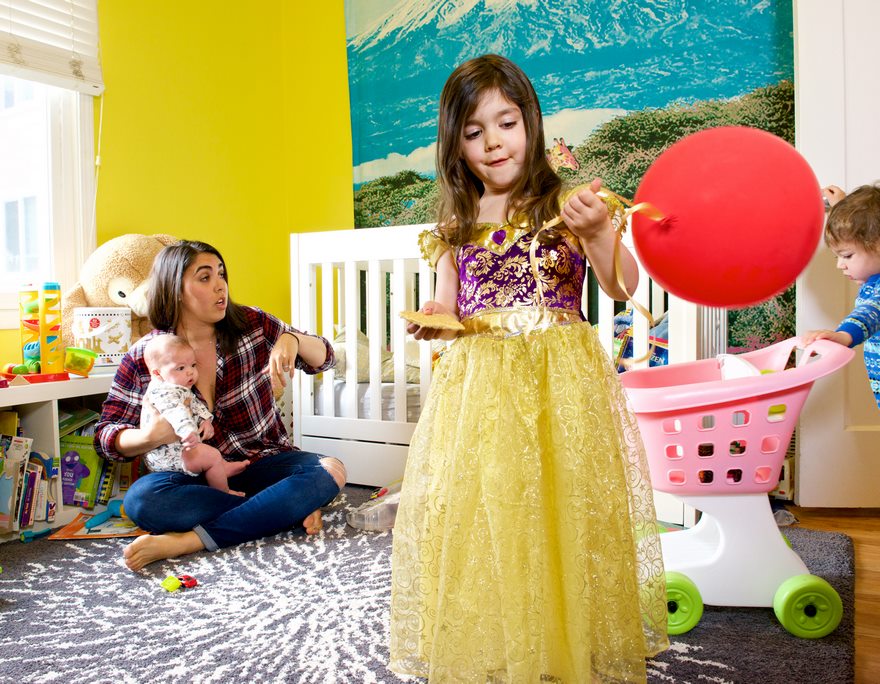 “In the first photo, I had an average life for that time. It was all about friends and school. Now my life is all about the children. Having two kids under two takes over in a good way. Our lives really revolve around food and eating. The kids and Joe and I love to eat, and we are all good at it. The weekend is about farmer’s markets and Costco, and then barbecuing or cooking big dinners or eating at our favorite Chinese or Vietnamese places. And music.
There isn’t really anything I wish I’d known before. I think everything turned out the way it did for a reason. Maybe just don’t sweat the small stuff. Think big picture.” — Erin 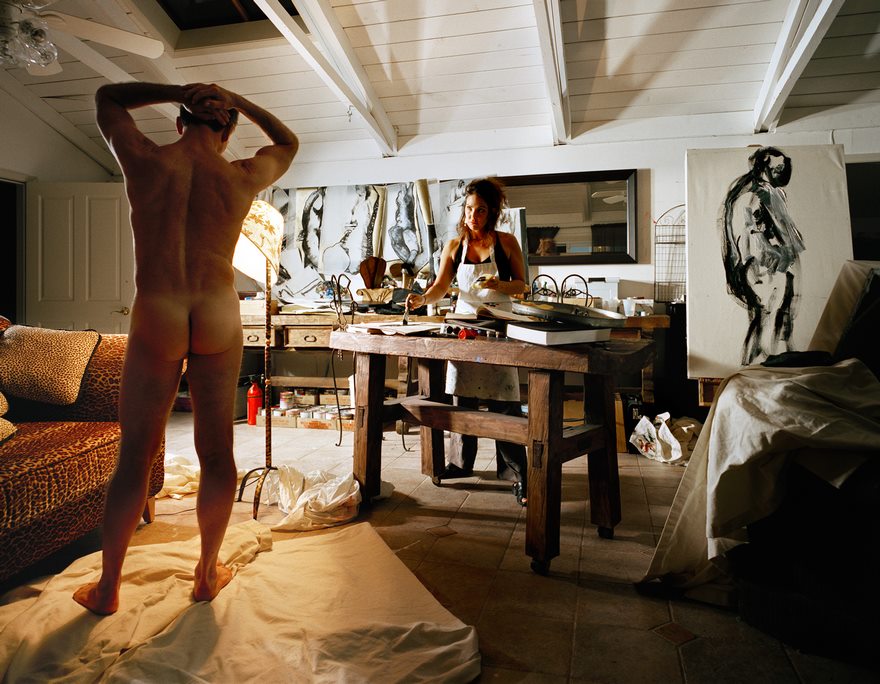 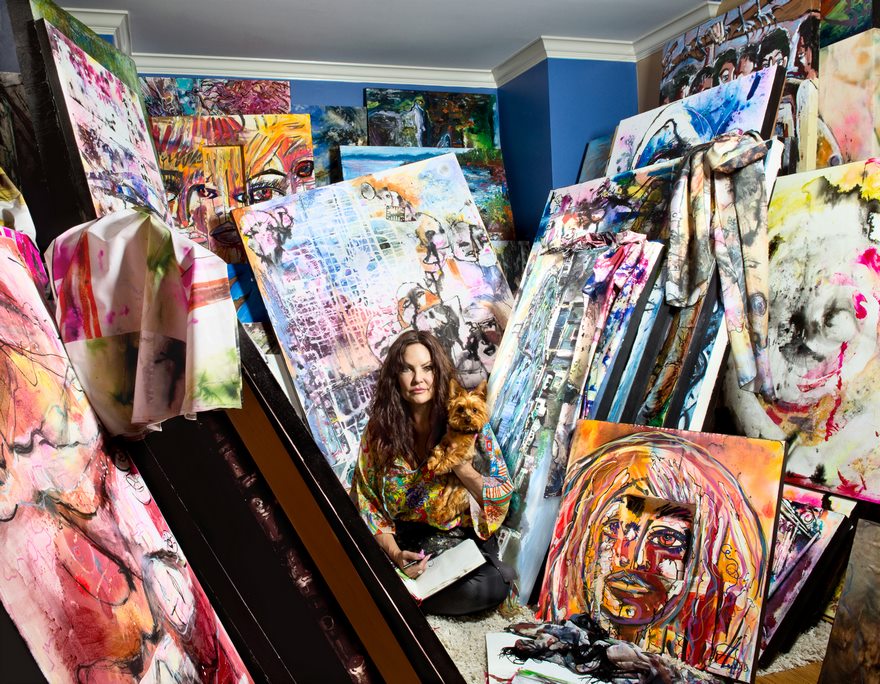 “The first photo was almost fifteen years ago. My kids were six and nine. I was a single mom, widowed at thirty years old. Today I’m living in the same house in San Carlos with my children, 21 and 24, and two dogs. I have a career in art and teaching, which has flourished after going back to college for an MFA. I’ve worked with a wide variety of people, including the elderly, children with cancer, people with autism, and young people in a juvenile hall. I’m also a scuba diver now. I wish then I had known that I was capable of taking care of myself and had felt less anxious”— Lisette 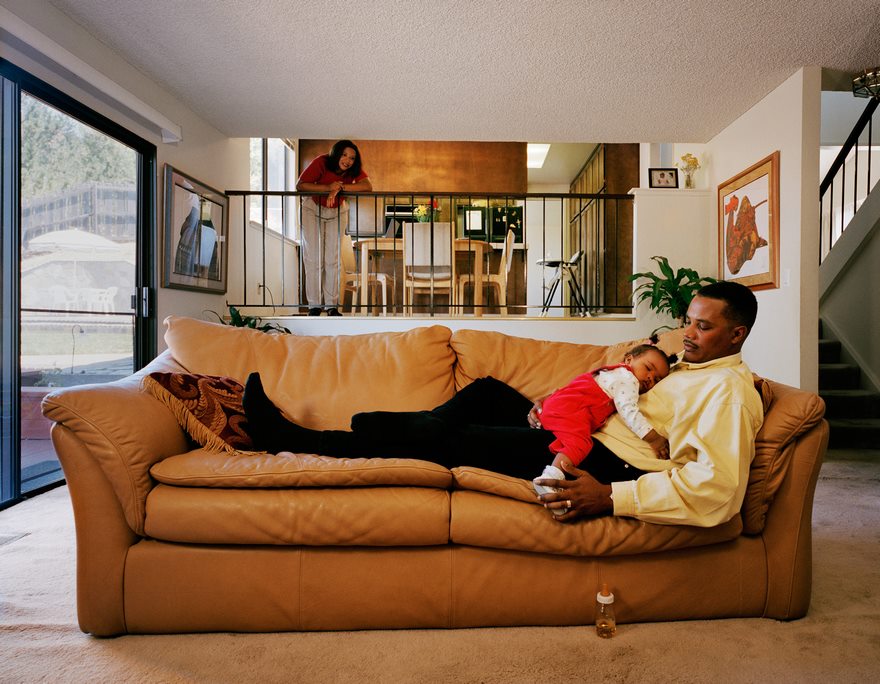 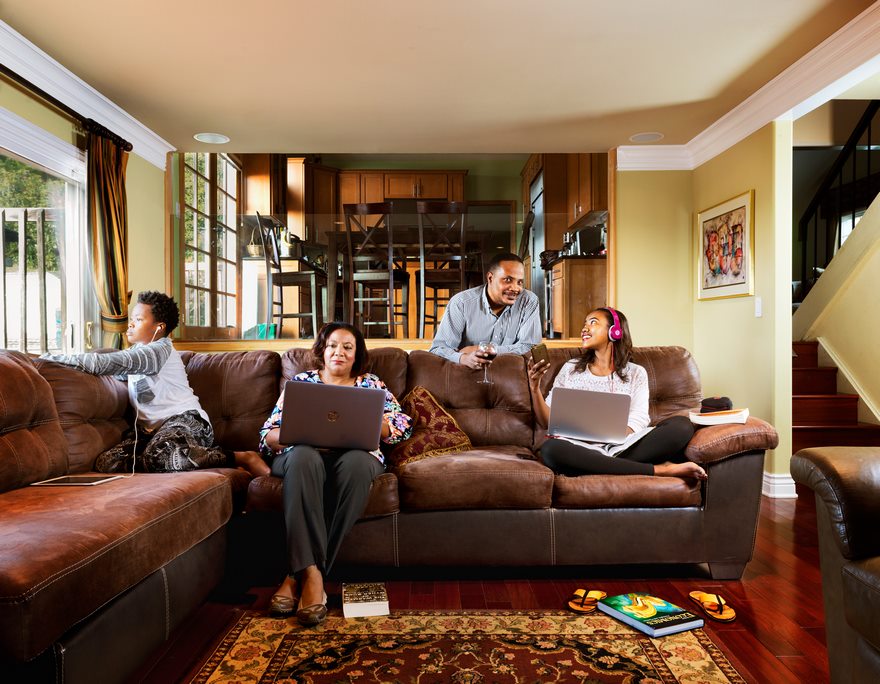 “In the 2002 photo, we were first-time parents who had just purchased a home in the Hayward Hills. We were a young and hard-working couple with dreams. We wanted to give our daughter, Danielle, the best life possible. Before the second photo, we had added a son, Darien, who is now fourteen. Danielle is now a freshman in college. She did extremely well in high school and was accepted into many prestigious universities. We have done some home improvements. I lost my mom, and James lost his dad. I grew up in Oakland, and James grew up in Richmond, California. We both lived in the inner city in blue-collar communities with modest single-family homes. We now live in a larger home in a middle-class suburban community. It’s a more affluent neighborhood than the ones we grew up in. Like us, our children have only known one home from the time they were born.
Time flies by quickly, so you have to enjoy your children at each stage in their lives. Also, spend more time with your aging parents, as they may not be with you for much longer” – Antonette 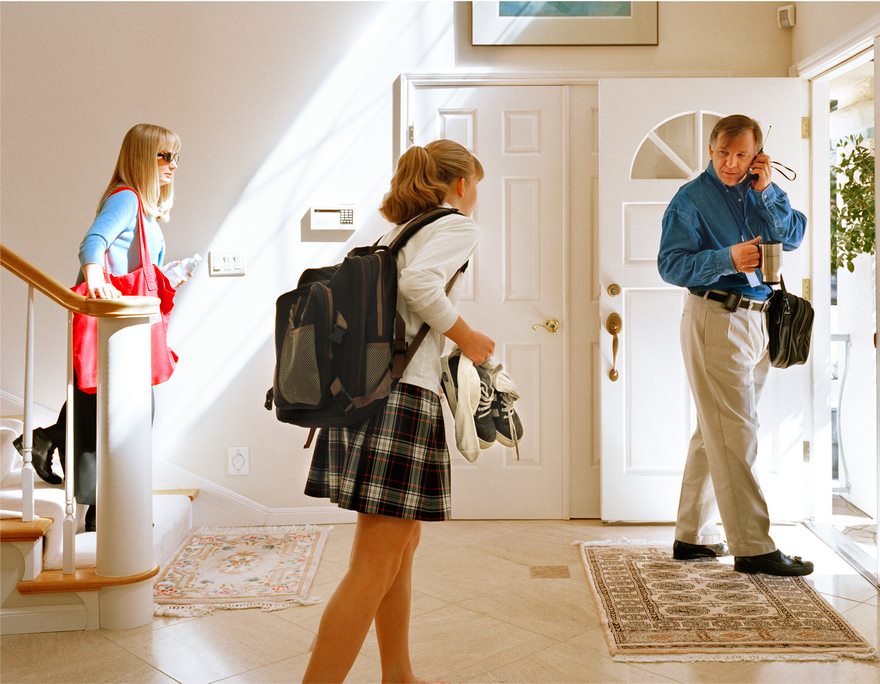 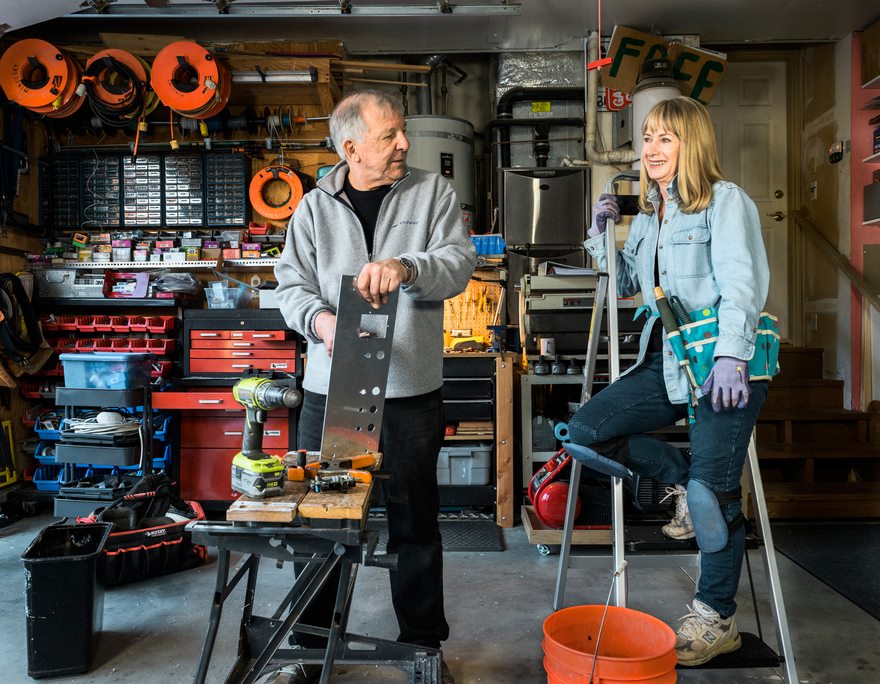 “2000 was a hectic time in our lives. John was working long hours at a Silicon Valley startup, I was working as an assistant grade school teacher, and Rachel was an active teenager involved with many sports, extra-curricular activities, and a thick web of friends. We live in the same house today in San Carlos, California. Between the first and last photos, both of our children have moved out on their own, and our oldest, Sara, got married. John retired from full-time management activities, and both of us have had to deal with some significant ‘medical adventures,’ which we happily have gotten through. We’ve done significant remodeling of our home and continue with improvements.
We both grew up in the East. John in Wisconsin and Marg in upstate New York. We are third-generation Americans, whose grandparents were born in Europe. We remember some of the traditions from the ‘old country’ and try to incorporate them in small ways, especially during the holidays” — John & Marg 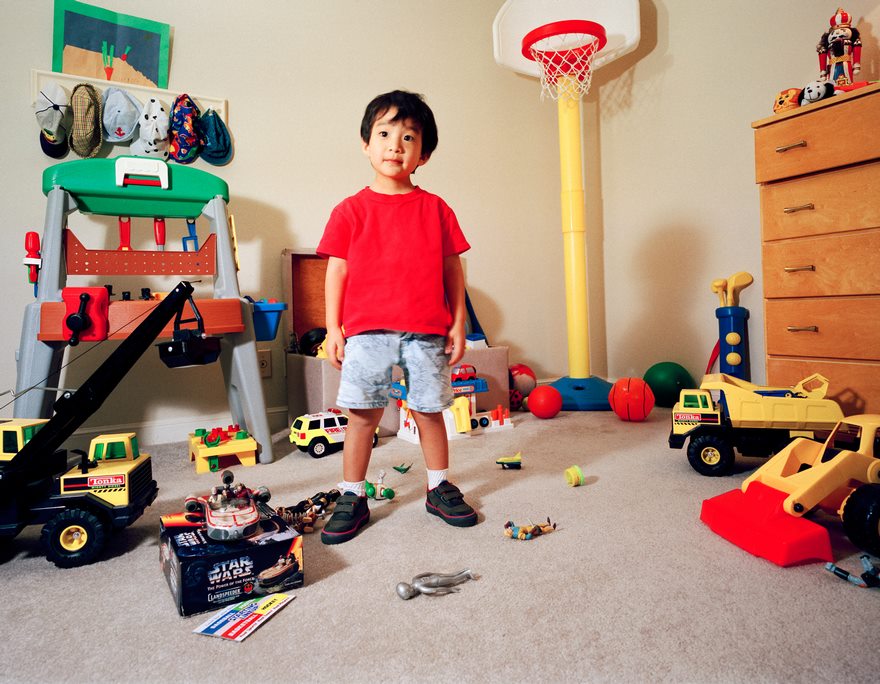 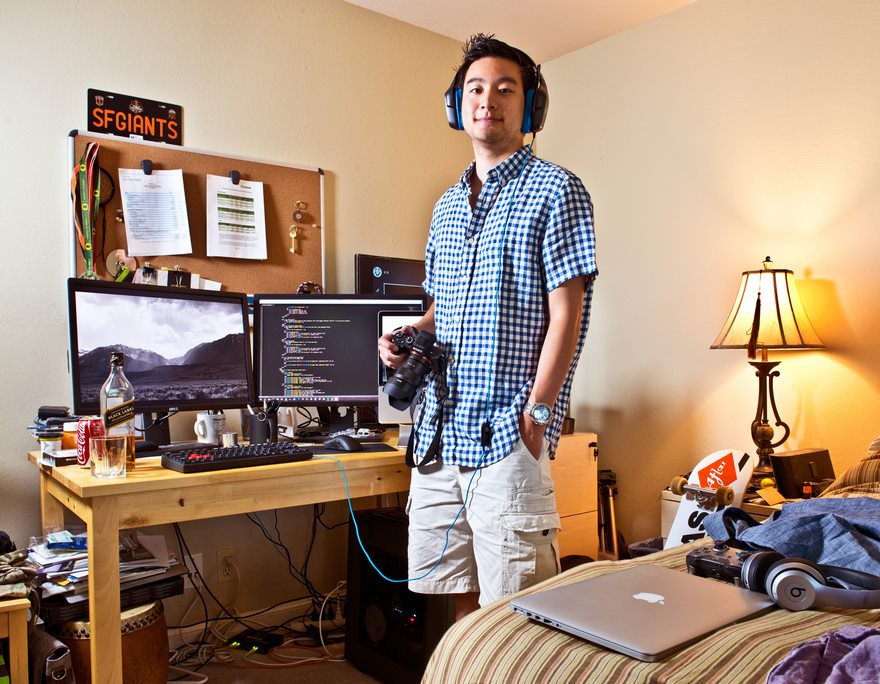 “In 1997 my life was fun and free, living by the moment. Now it’s more structured. I’ve graduated college and am working as an IT engineer while I try to get my startup, which I’ve been working on a little over a year, running. In addition to my startup, my goals are to travel the world taking photos and to buy my own place. I’m currently living with my parents in Hillsborough, where I grew up. If I had known then what I know now I would have invested in Google and other tech companies” — Kyle 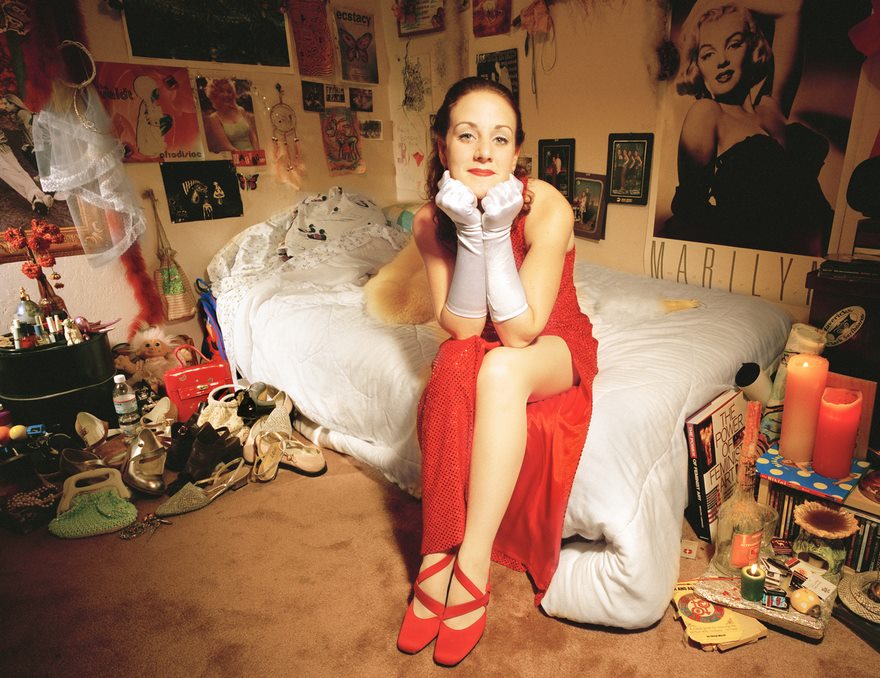 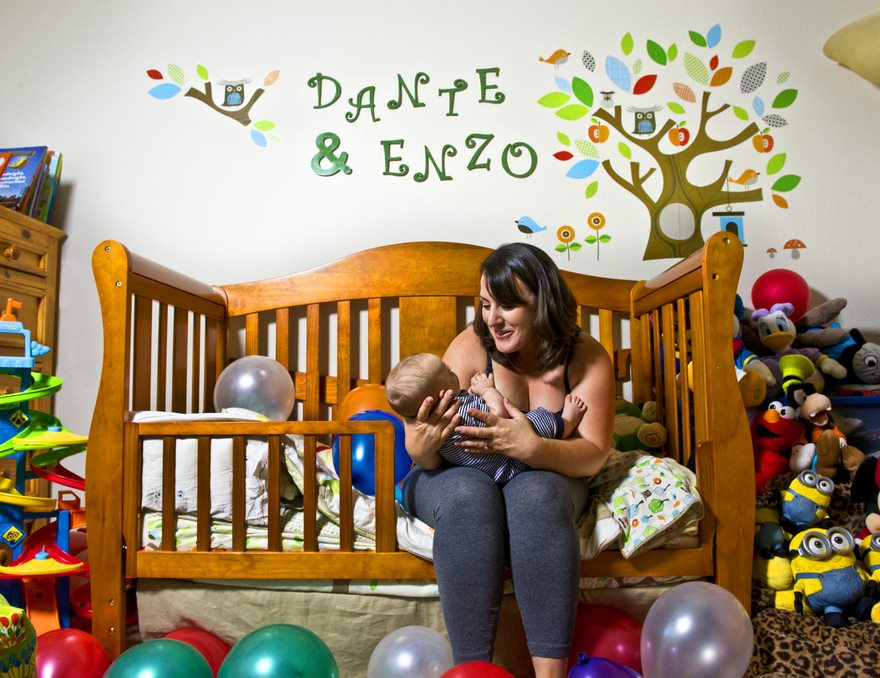 Here are some of her other pics from the same project we’re hoping she’ll manage to recreate too: 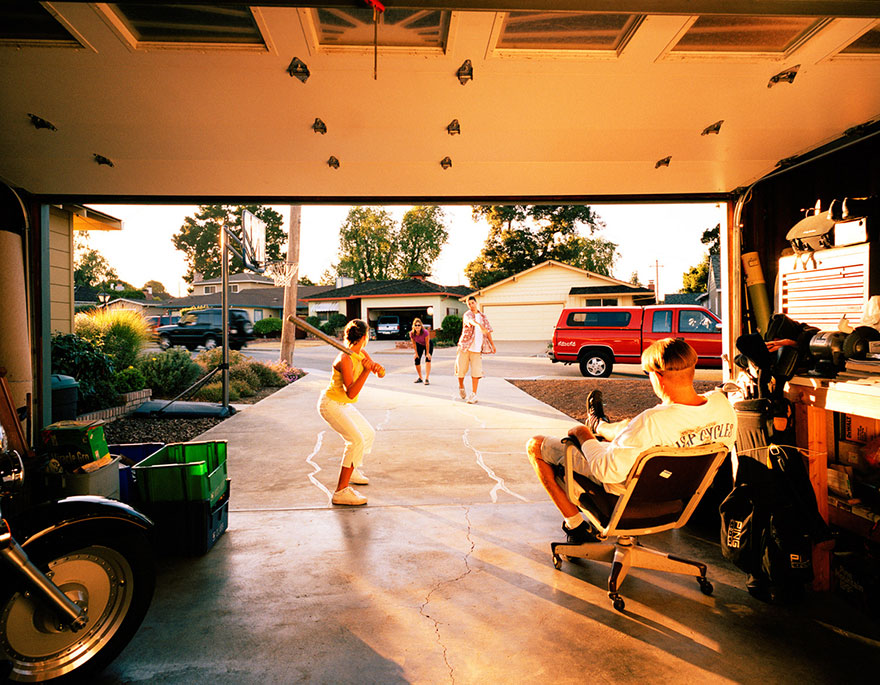 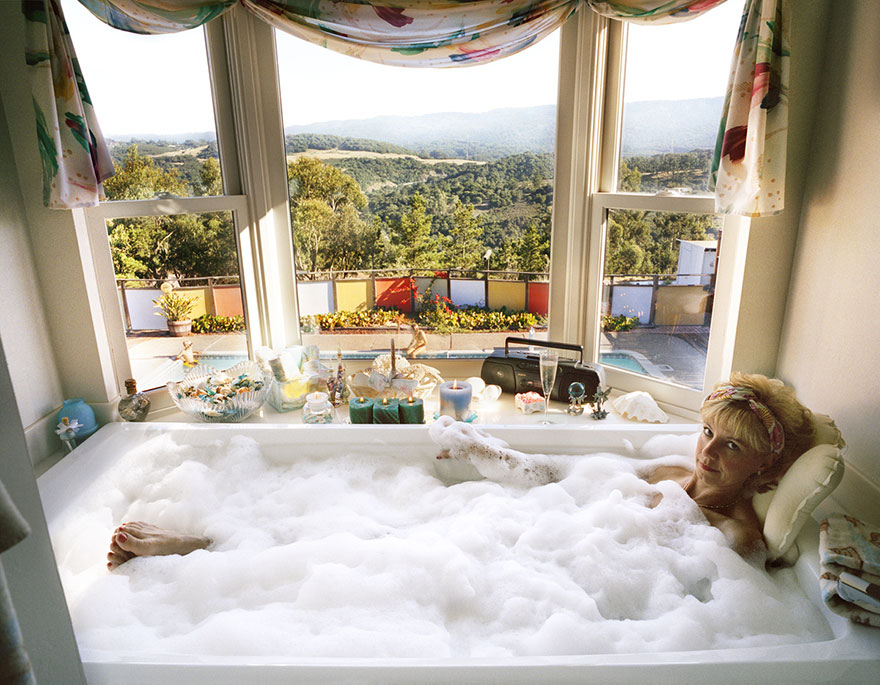 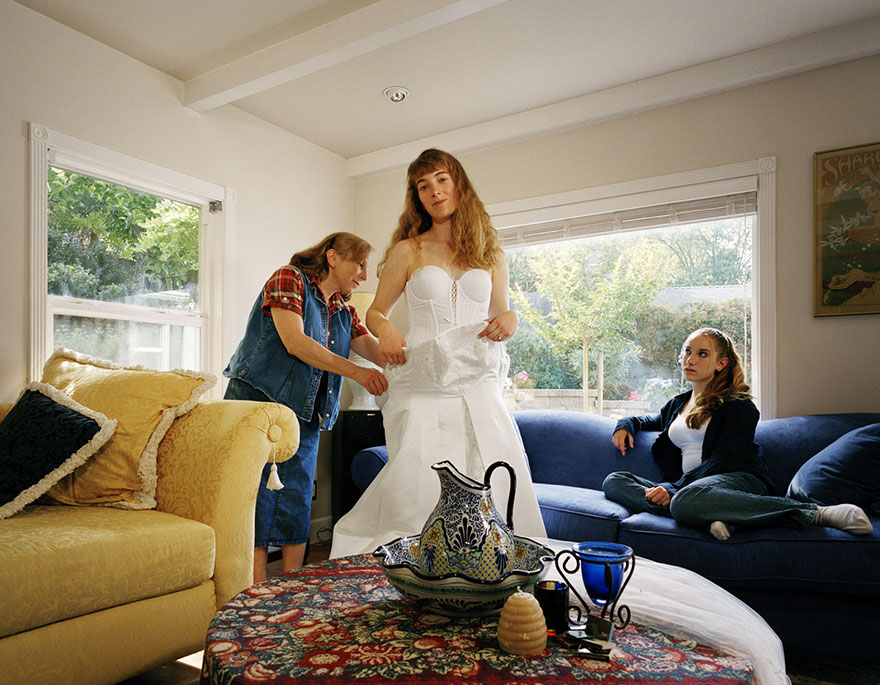