How often are you at a serious “loss of words”? Luckily, with “Untranslatable Words” Marija Tiurina has collected, explained, and illustrated 14 non-English words we could certainly use. Of course, schadenfreude – joy at someone’s misfortune – isn’t that exotic and is likely known to anyone who writes for the internet. The others are definitely something. Everyone in the office is in love with “cafune”, the Brazillian Portuguese word for gently running fingers through somebody’s hair, and “age-otori”, Japanese for “looking worse after a haircut”, is also useful.

Marija Tiurina is a London based artist with a vibrant, somewhat cartoony style. According to translation methodology, what Ms. Tiurina did with “Untranslatable Words” is “paraphrasing”, when an untranslatable word is replaced with an explanation. However, for English, “loanwords” are the usual way to go about it – that’s how we got words like “commando” and the now almost absorbed “schadenfreude”.

So this would make the list closer to 13 words, but, as they say. c’est la vie!

Cafuné – the act of tenderly running fingers through someone’s hair 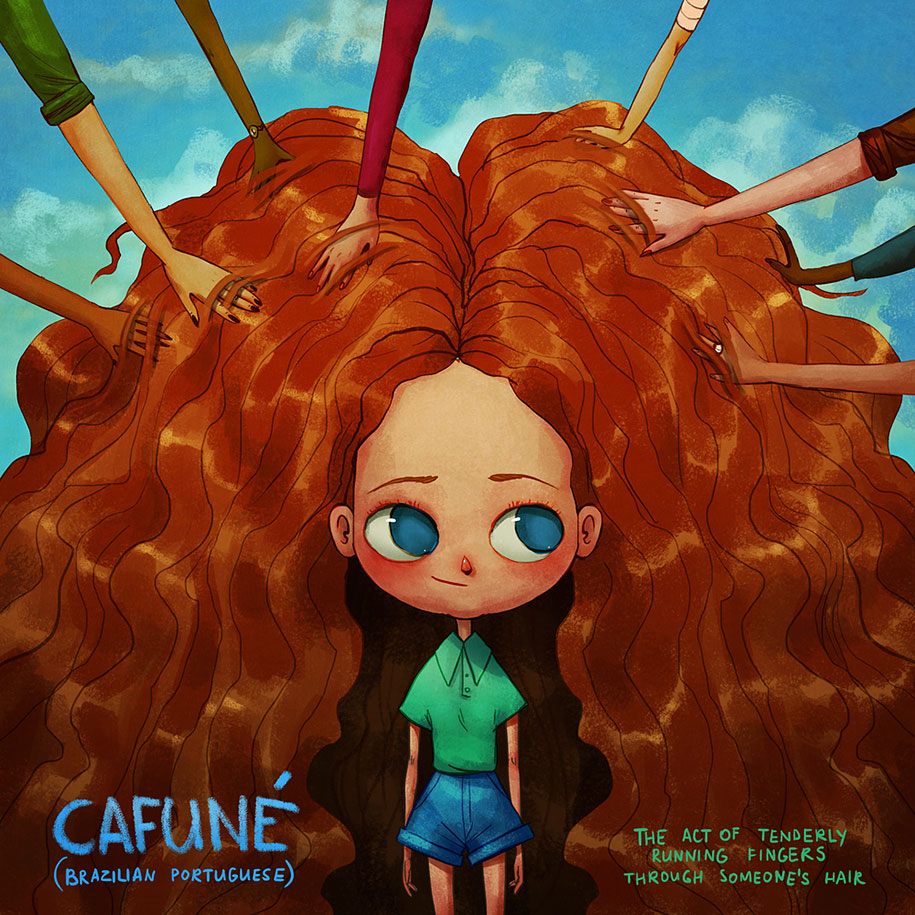 Brazilian-Portuguese: For the third time in my life, I’m caught in a daze, I tripped over the heart of a beautiful girl, and stumbled, helpless, straight into her gaze, now nothing else matters, but her beautiful curls. People might tell me that this is a craze, “it’s nothing, you fool, but the honeymoon phase!” But I don’t believe them, no, not for a day, I’ll run my fingers through her hair, and practice “Cafune”. 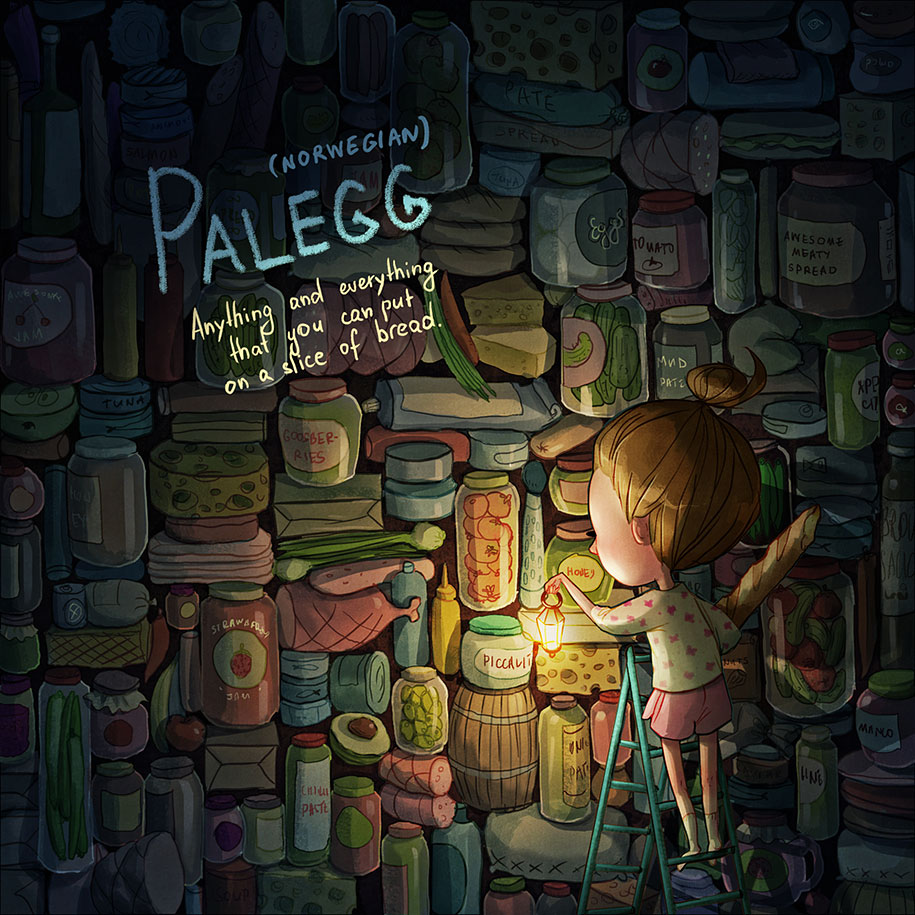 Norwegian: From pickles and olives to juicy tomatoes, from cheese and butter to turkey and dill, from beets and greens to slices of potato, your stomach together all these things would fill. So isn’t it grand that most anything around, from garlic to mustard to ham by the pound, if it fits on some bread, whether a carrot or an egg, then it fits in the category of “Palegg.” 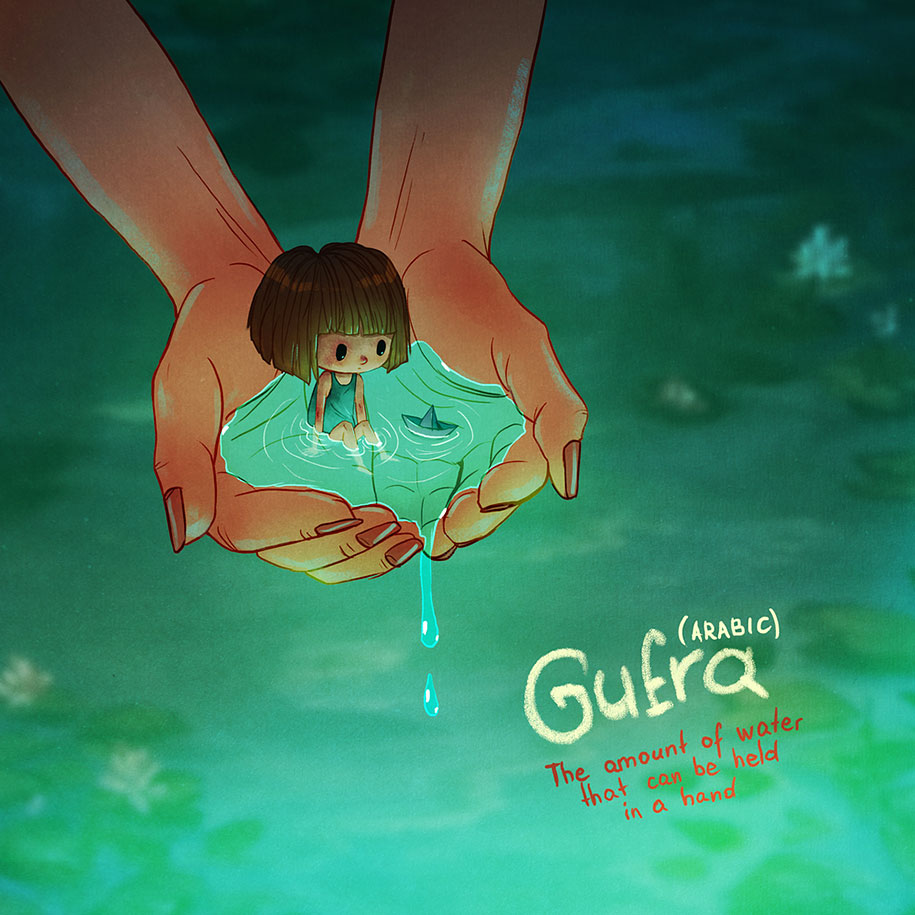 Arabic: Water without shape is strength and calm, at once so tranquil, and then a storm, it sustains our lives, but before long, can cut through cliffs, by making worn, the stone, the sand, in all different sizes, water itself is filled with surprises, what water fits in two hands, whether it drains or rises, is known as a “Gufra,” which comes in all different sizes! 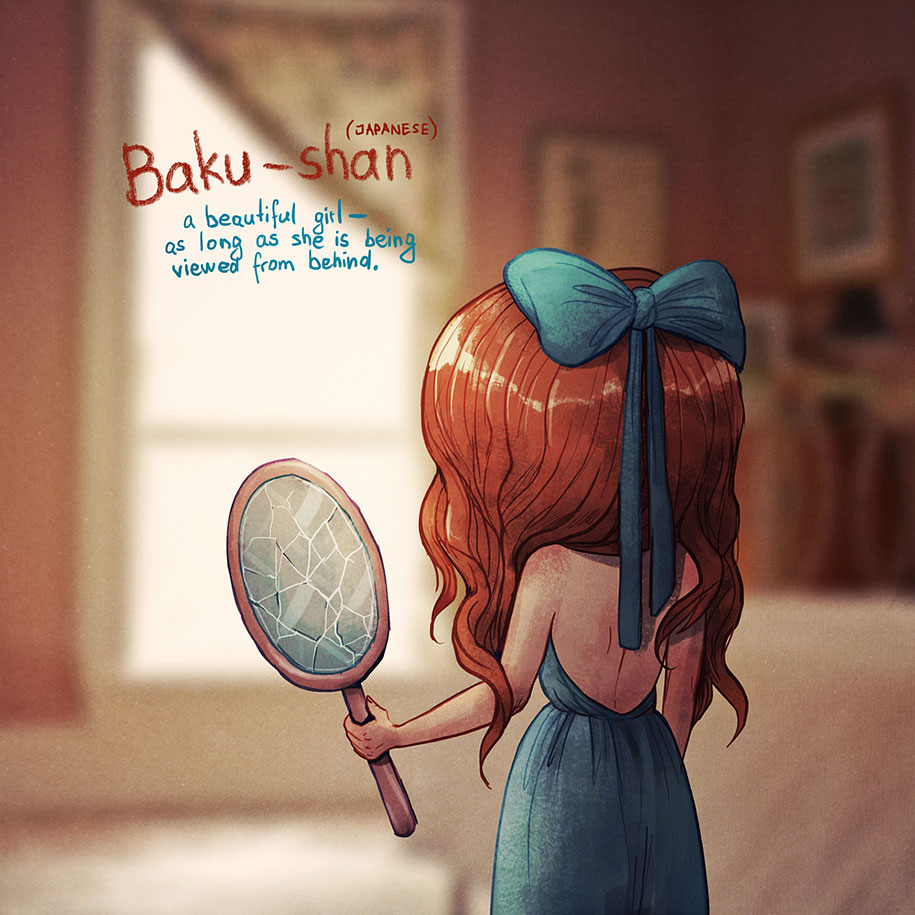 Japanese: People naive would have us believe there is no harm in words unkind, “sticks and stones can break my bones,” but words? Well words can break your mind. And so it is that in Japan, there is this word, named “Baku-shan.” It pinpoints a person possibly pretty, but from the front, she’s no real beauty. 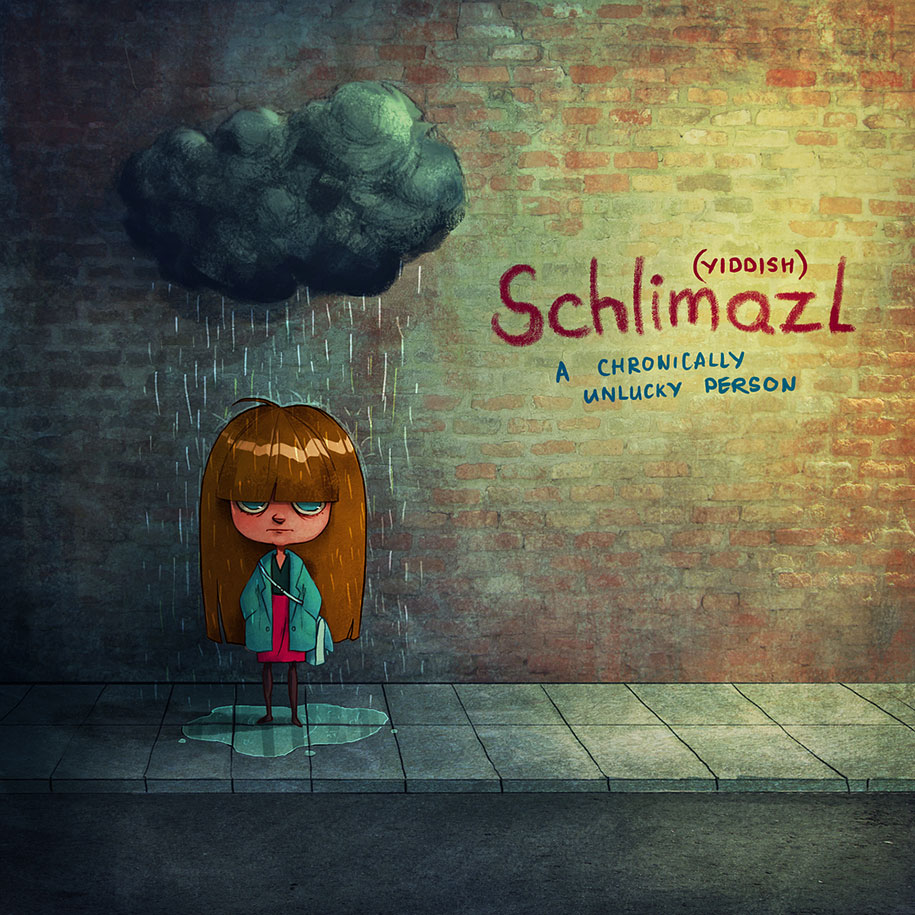 Yiddish: One morning she woke with a grin on her face, but quickly she stumbled and smashed her best vase, after smashing her vase, she fell straight from grace, and her fortune became but a bad aftertaste. For years on end she suffered bad luck, her house burned down and she crashed her truck, how painful, how sad, her fortune was tousled, and now and forever she’s known as a “Schlimazl!” 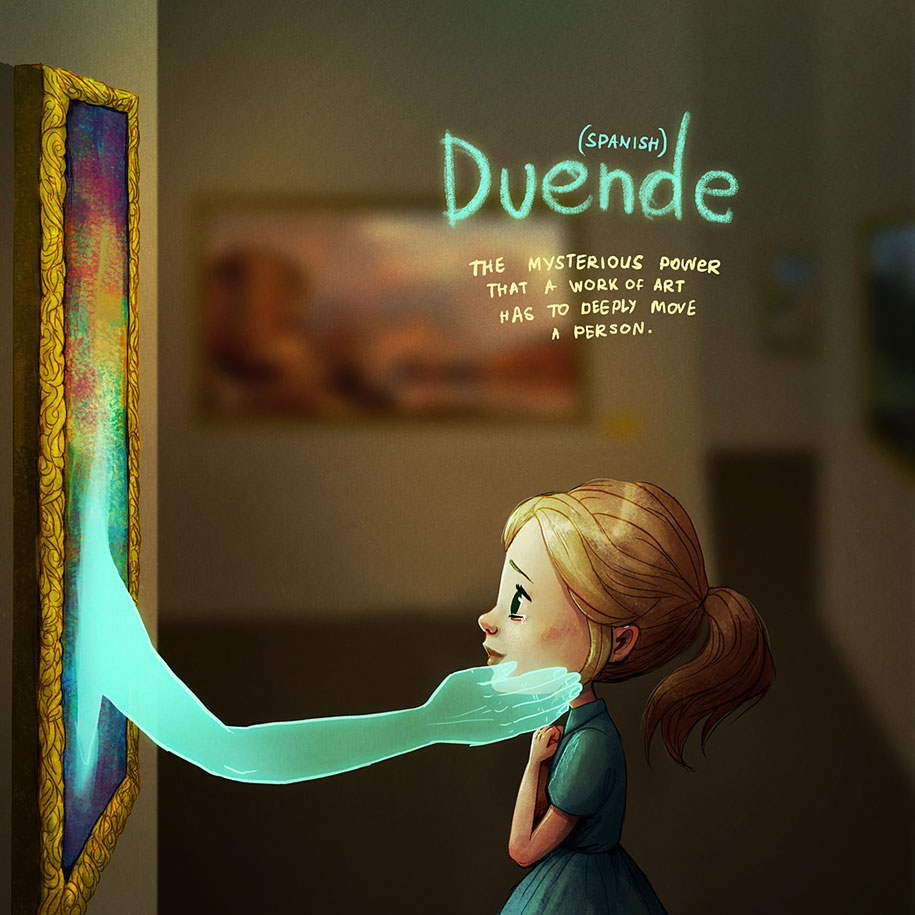 Spanish: There is a hidden power, deep within paint, deep within music and words and such, this power can cause a person to faint, simply by viewing the strokes of a brush, the Spanish call it “Duende,” that secret, warm flutter, that speeds up the heart, and makes muscles shudder. If art can evoke such feelings of awe, then art must be wired to some spiritual maw.

Age-Otori – to look worse after a haircut 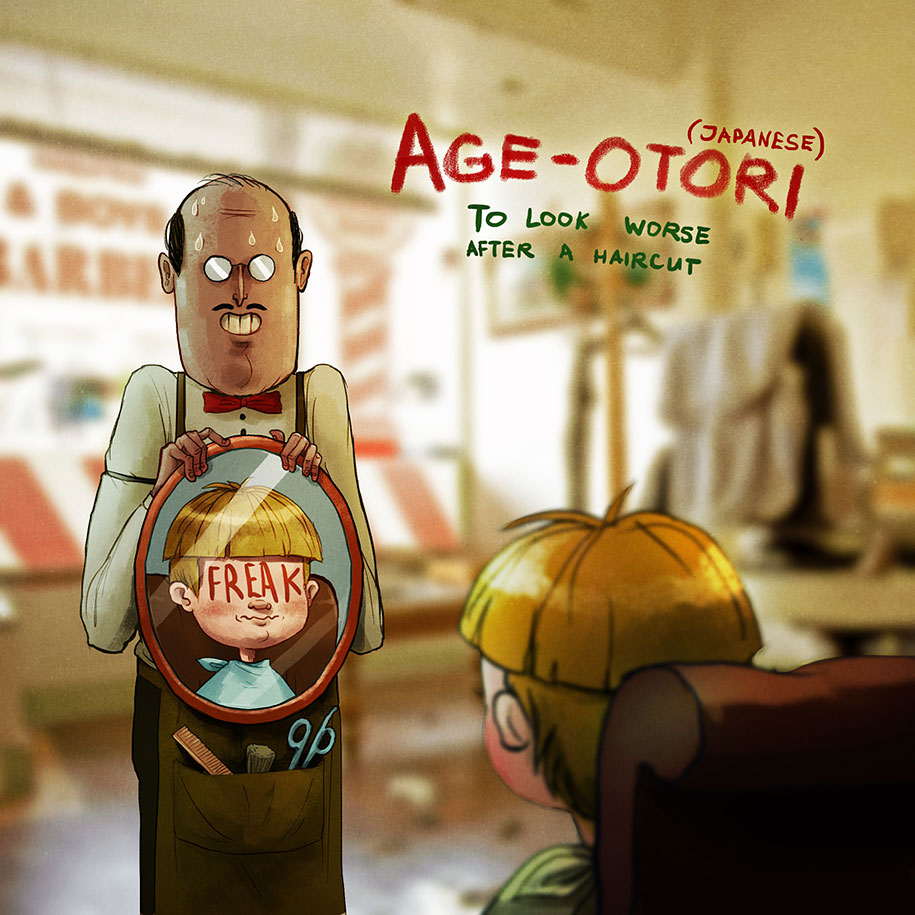 Japanese: Today is my day, I’m free of all fear! In this world today I couldn’t have a care, my body is healthy, my conscience is clear, I’ll start this day off by cutting my hair! First snip the sideburns, those scissors are fangs, hungry for tangles, and fibers and bangs, wait, slow down, Mr. Barber, you’ll ruin my story! Oh great, it looks like this haircut is an “Age-Otori.”

Kyoikumama – a mother who relentlessly pushes her children toward academic achievement 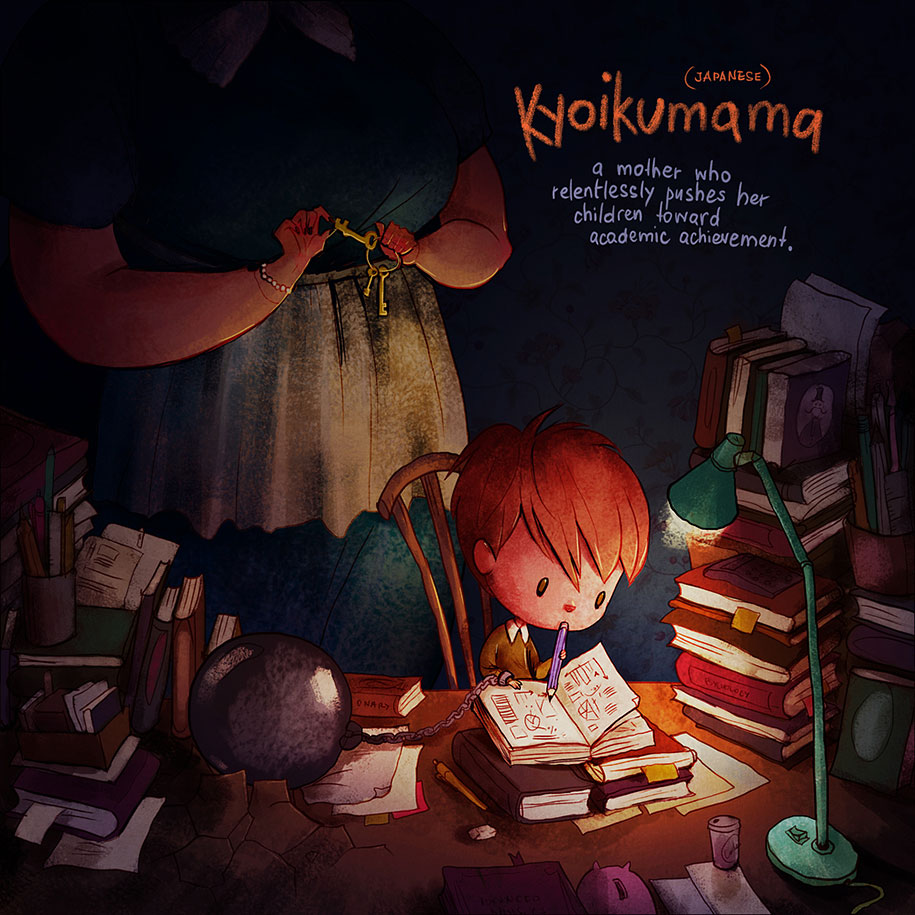 Japanese: If you spent your childhood in a daze, working yourself into a premature trauma, it’s probably because your mother was crazed, what the Japanese call a “Kyoikumama.” But do not worry, no, don’t fret, this time of mom is the best to get, for she makes you work hard, until it is clear, your future is bright with a perfect career. 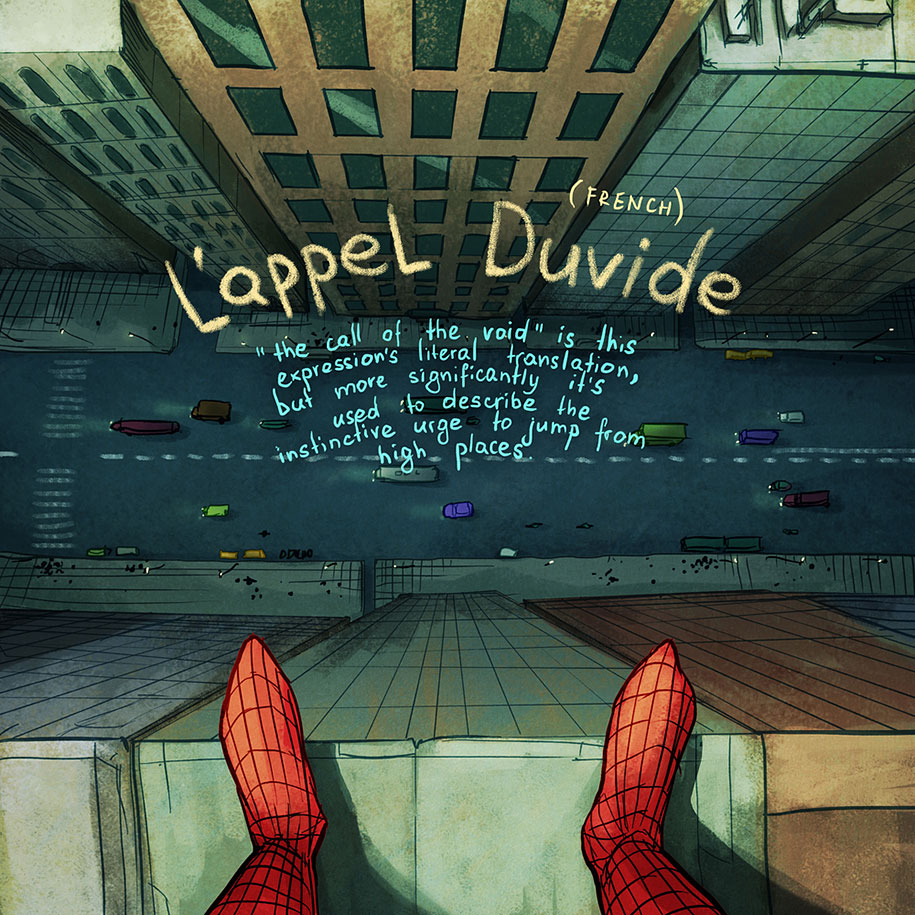 French: We all know the feeling: a sudden, cold rush, that from the rooftops and places high, brings us bewilderment, makes us blush, makes us want to take a dive. Perhaps a shade of instinct past, we were once birds, too slow from fast, and now a remnant of that urge to fly free, presents itself as “L’appel Duvide.”

Luftmensch – refers to someone who is a bit of a dreamer, and literally means “air person” 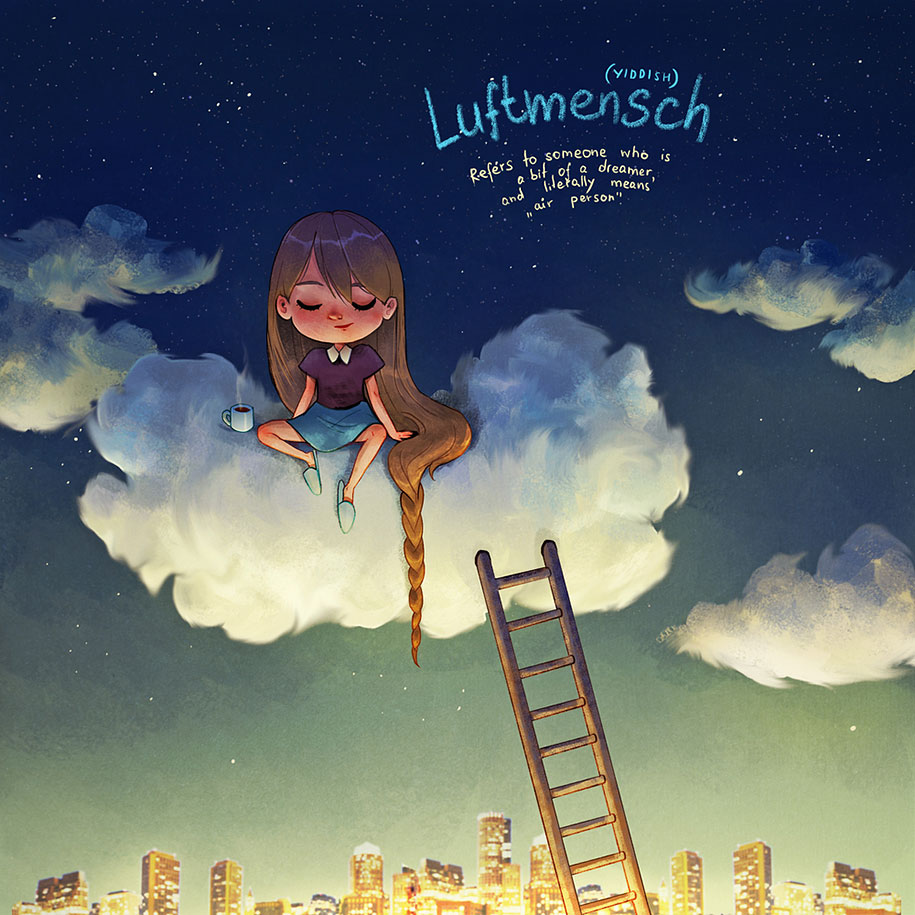 Yiddish: There is a lady in the sky, she’s grazing clouds and kissing birds. Where did she discover the power to fly? A magic spell? Teach me the words! Alas, oh no, it is no spell, but instead, as truth will tell, a simple mindset, a unique sense. That lady there is a “Luftmensch!” 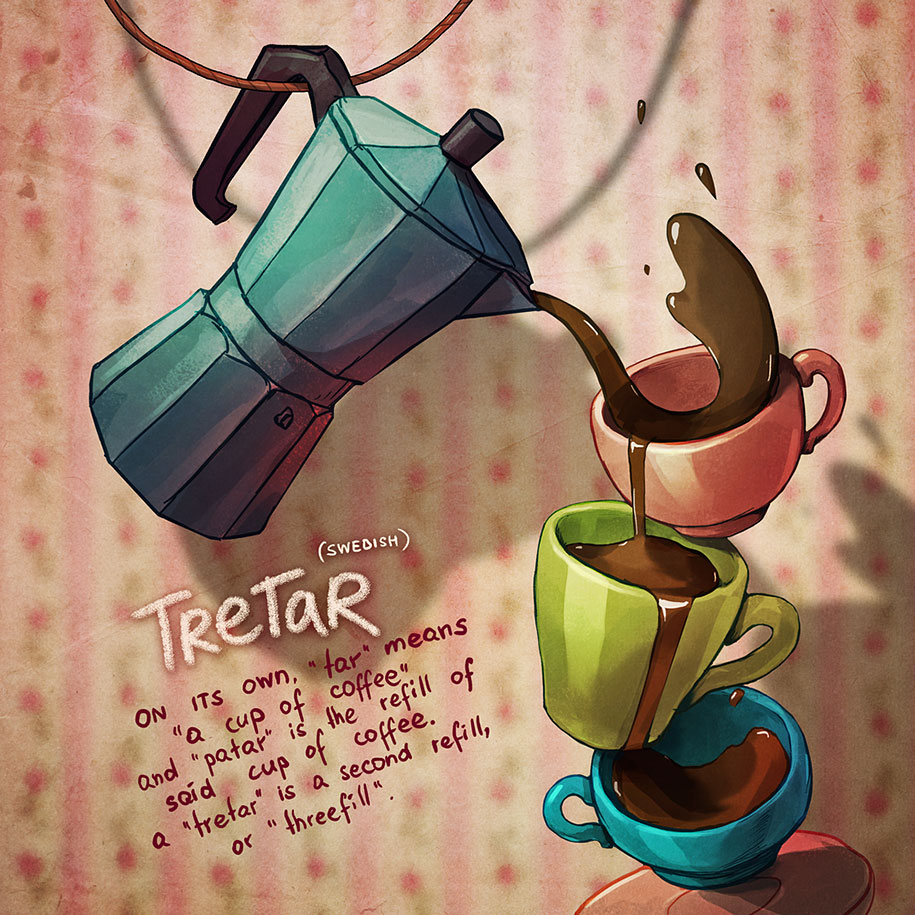 Swedish: How did you guess, my gentle friend, that I would love a cup of joe? Perhaps the way the light did bend, reflecting off my troubled nose. You saw the ache there, yes, fatigue, well I’m still tired, do you believe? I need a third cup of coffee, dark, I’ll pound the counter and yell “Tretar!”

Torchlusspanik – the fear of diminishing opportunities as one ages 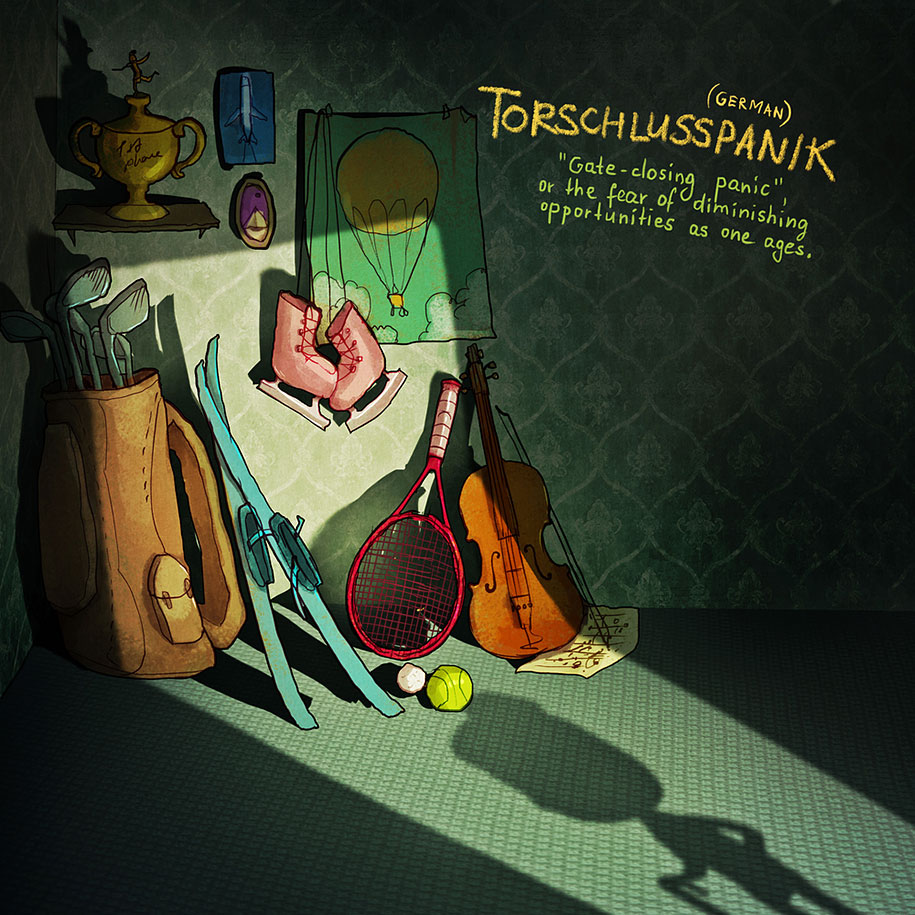 German: I used to ski every Sunday at three, but now I just sit and I watch the TV. It’s not because I’m old, no I swear, that’s not me! It’s mainly because I tweaked my left knee. What? Oh yes, I used to play ball, every Friday at four, now I stare at the wall. Maybe you’re right, though I can’t even stand it, I think I’m a victim of “Torschlusspanik.” 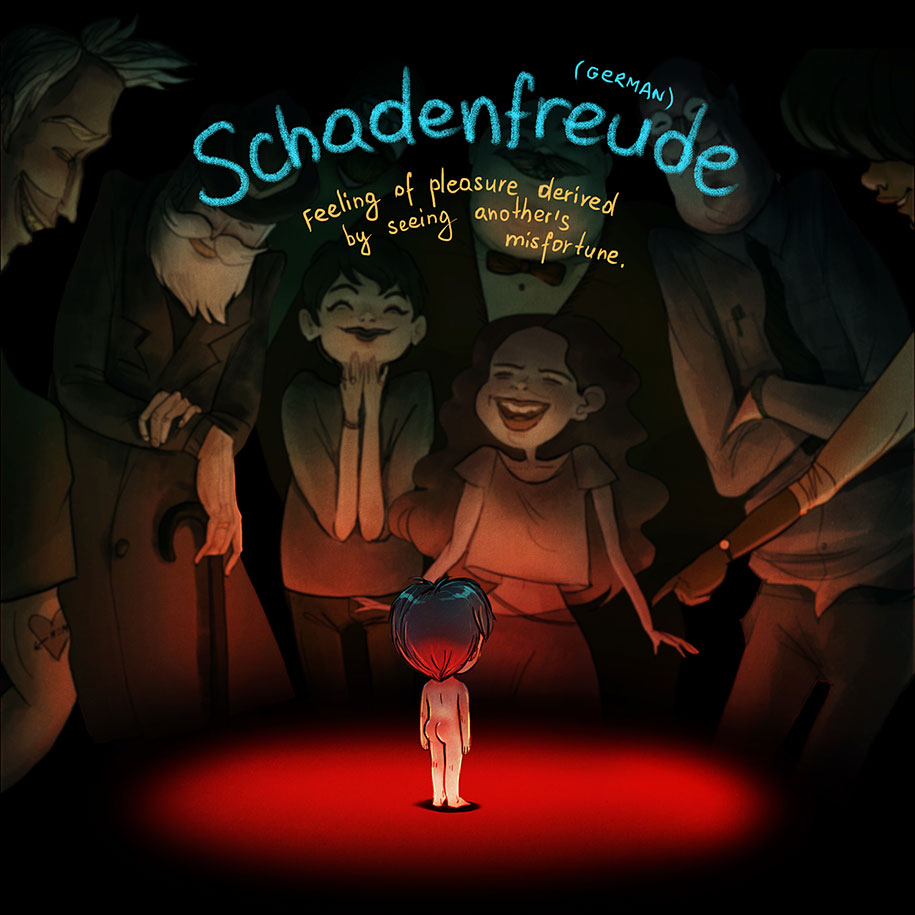 German: When shame is shared through months and years, the strength of time dispels such visions, painful memories become less clear, and lead to less childish decisions. Alas, when another falls in shame, it brings one back to that state again, to relish in their pain, to sneer and loiter, is the game of the “Schadenfreude.” 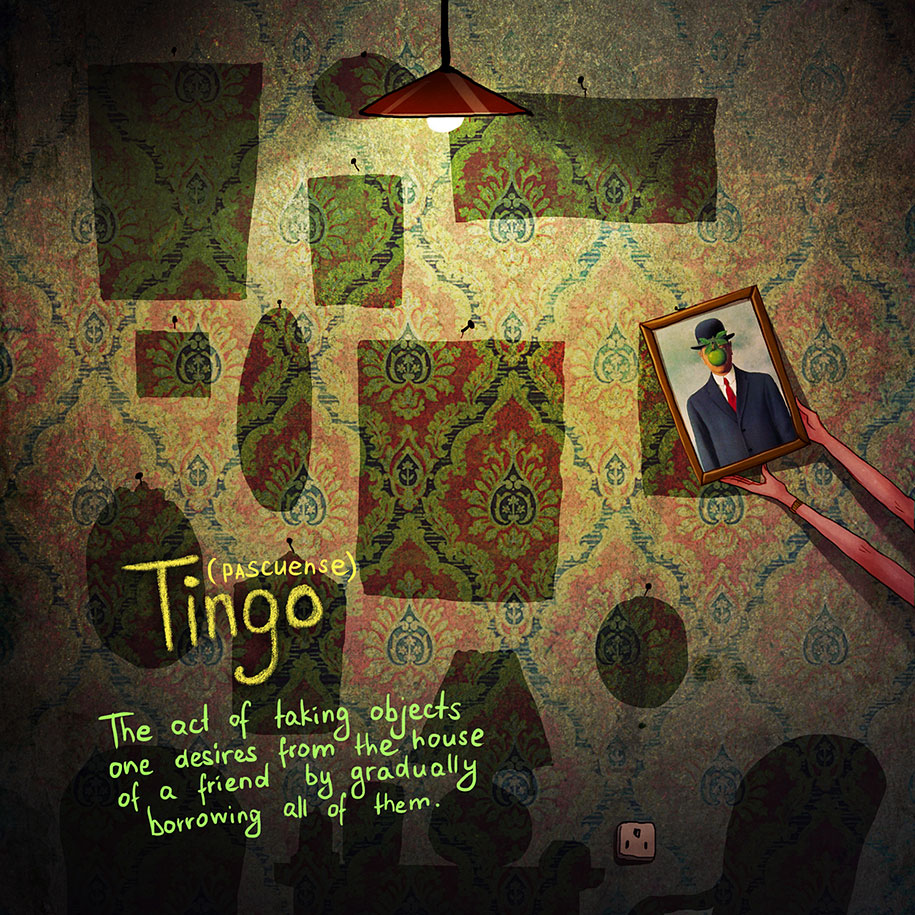 Pascuense: There are such things as envy and greed, which can even exist ‘tween the best of friends, the former occurs when one is in need, the other occurs again and again. One can satisfy such cravings quite easily, just borrow and borrow, it’s reasonably easy, to steal by borrowing, frames, cards, games, bingo! You’ve stumbled upon the act of “Tingo.” 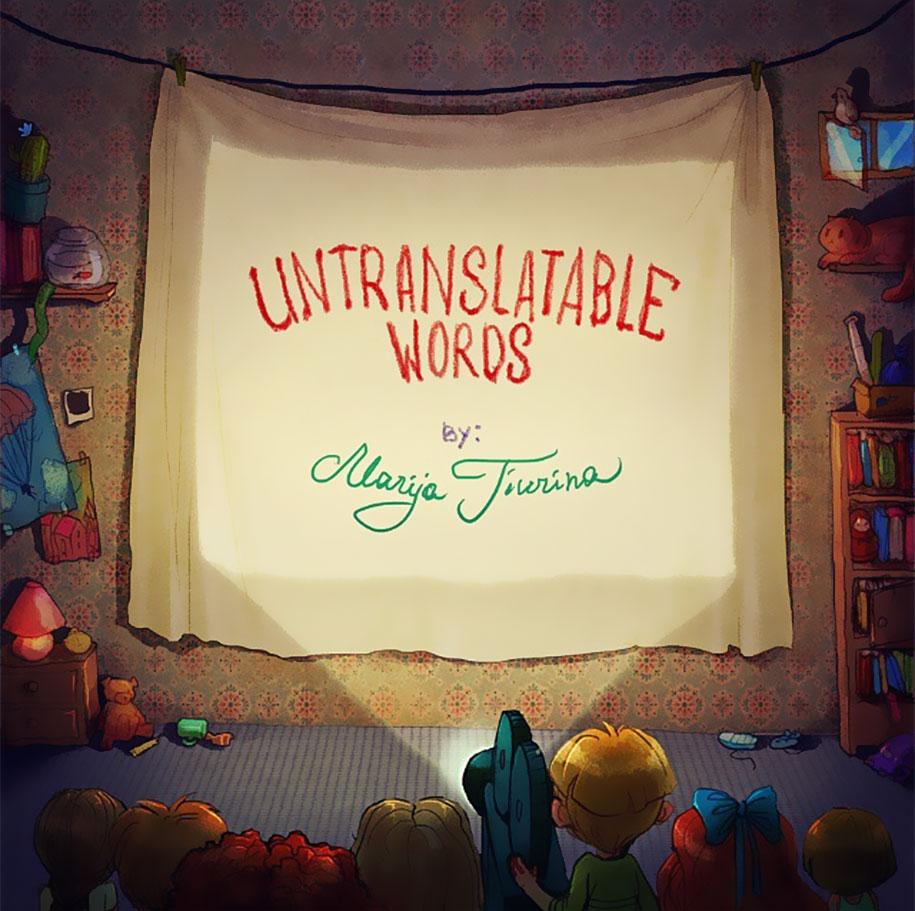