In India, we love our deities. Most are adorable, calm and some are heroic warriors; wild, unforgiving, angry slayers of the evil. The later are the ones that are flamboyant in their appearance, have unique annihilation methods and also love being praised and exalted. And they also are kind and nurture the ones that follow and invoke them. From severing of heads to ripping guts open with astonishing bloodshed to being terrifying in appearance, the imagery of our deities has been etched deep in our cultural mindset and belief systems from ancient times.

And yet, in spite of all the carnage and destruction, the entire society conveniently tends to overlook the terrifying slaughter, and worships these glorious deities unflinchingly with love and devotion. Call it faith, fear or pure admiration, these deities have continued to fascinate us and rule our imagination for millennia.

All these imagery, if viewed by the shallow eye, will be an awesome visual drama. However, they all are deep metaphors depicting various struggles of a human being’s journey on the spiritual path.

When I was a child, my grandmother used to tell me stories of these deities with quite a few details of their battle. And ever since then the images of war, bloodshed and ferocity about these deities have been carved in my subconscious . This is how I had pictured them in my own imagination, completely different from the stereotyped age-old or modern paintings in India that have been depicting these deities.

These works of art titled ‘Deities of Bloodbath’ have been inspired by these warrior deities. This new style of art has been influenced by the simplicity of the brilliant Lego toys, doll figurines and web/app icon designs. Creating a fusion of minimal elements and basic shapes, this is an attempt to present a completely new & brutal artistic expression of our epic pantheon. 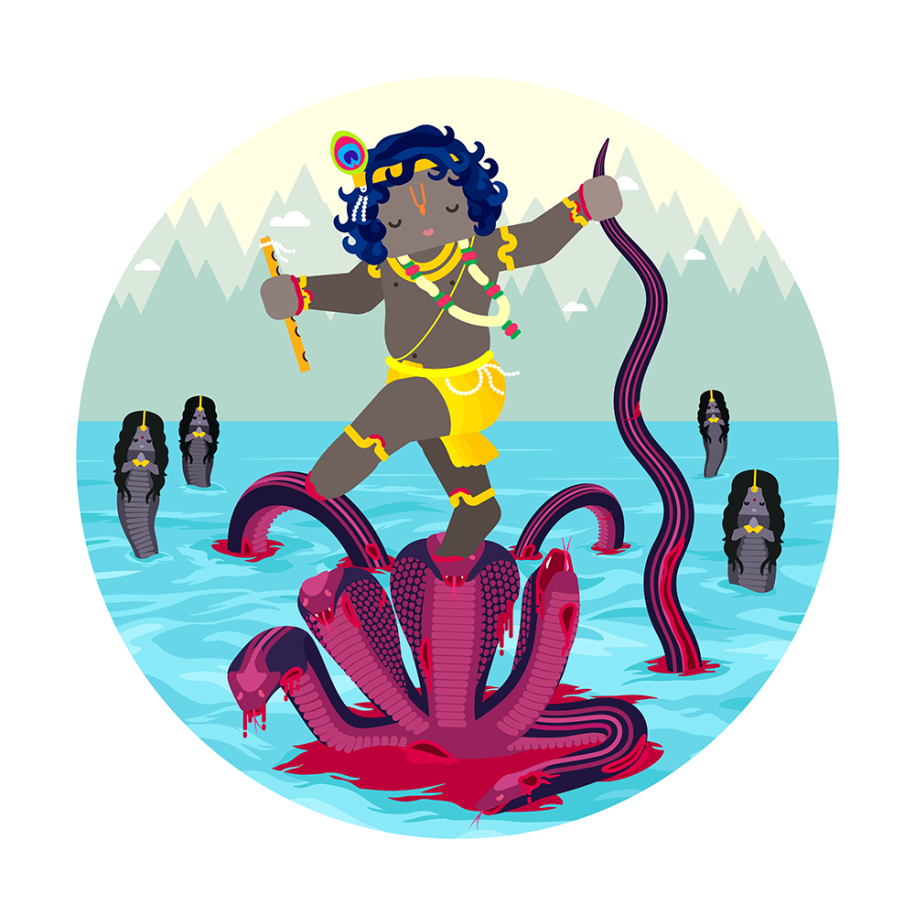 The event is called Kaliyamardan (Elimination of Kaliya). It depicts the battle between baby Krushn and Kaliya, the five hooded serpent demon in the river Yamuna. Kaliya’s four wives plead to the baby deity to spare their husband’s life. Krushn tames the poisonous demon and banishes him from the river. Krushn, also spelled Krishna in popular culture, represents the consciousness of a human while Kaliya and it’s poison represents the temptation caused by the five senses. 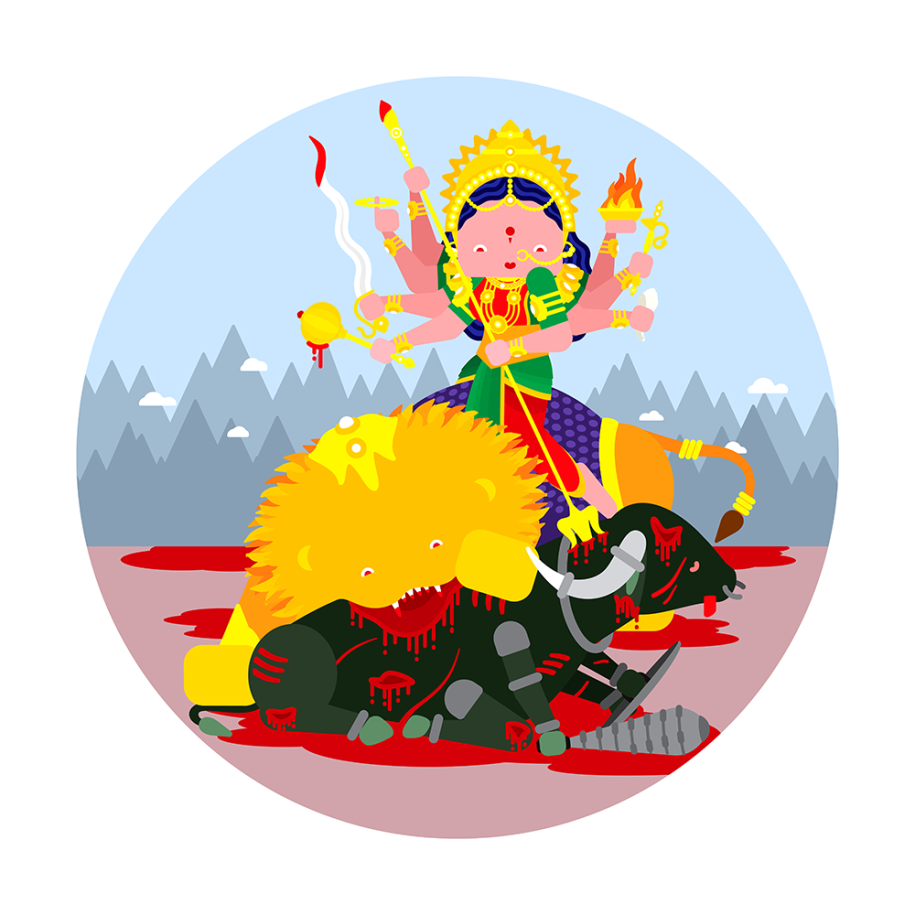 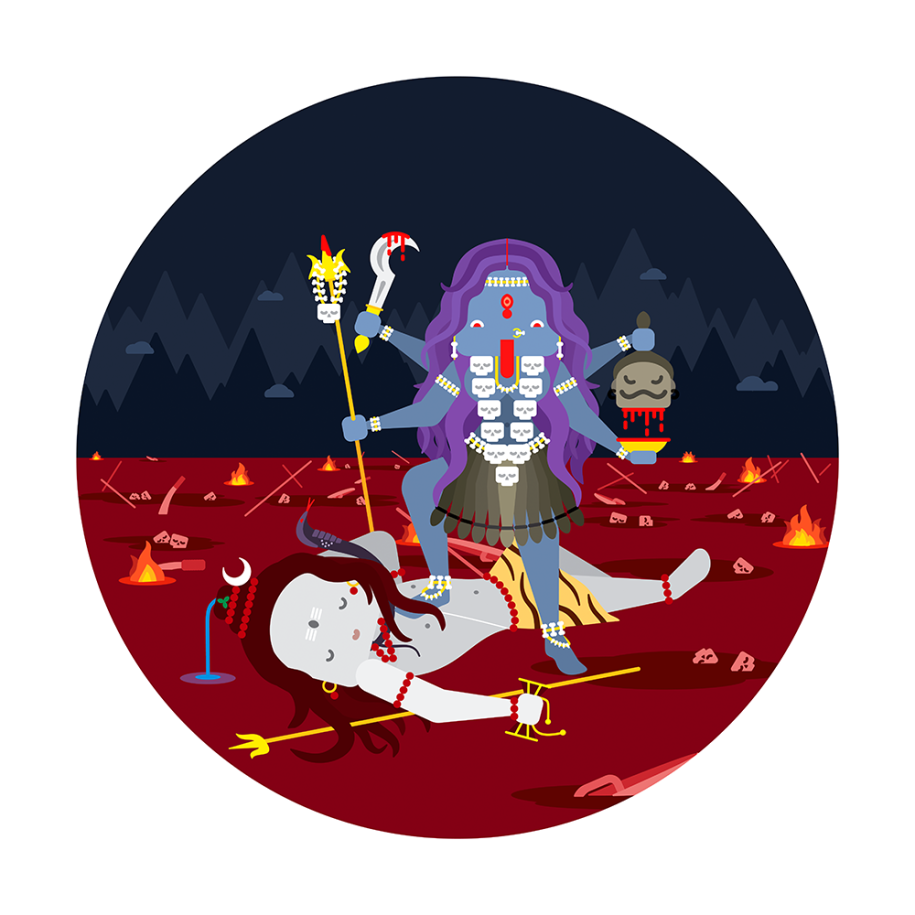 The event is called Raktabij Savhar (Slaying of Raktabij).Maha Kali, literally meaning the ‘black one’ is the dark mother – naked, untamed and fierce adorned by bones and demon limbs. She severes the head of Raktabijasur, the blood-seed demon. After this, she goes wild destroying and burning all the other demons creating a gory war scene till she is stopped by her consort, Shiv who lies like a corpse in her path. The moment she steps on his chest, she unfurls her tongue out in shame and stops the carnage.Maha Kali, is the raw Kundalini energy in our body which, when unleashed, goes on to destroy every impurity in our blood cells and entire body with great brute force till she reaches the pineal gland, the seat of Shiv, the ultimate source of truth and liberation. The human being harnesses the universal energy at this state. 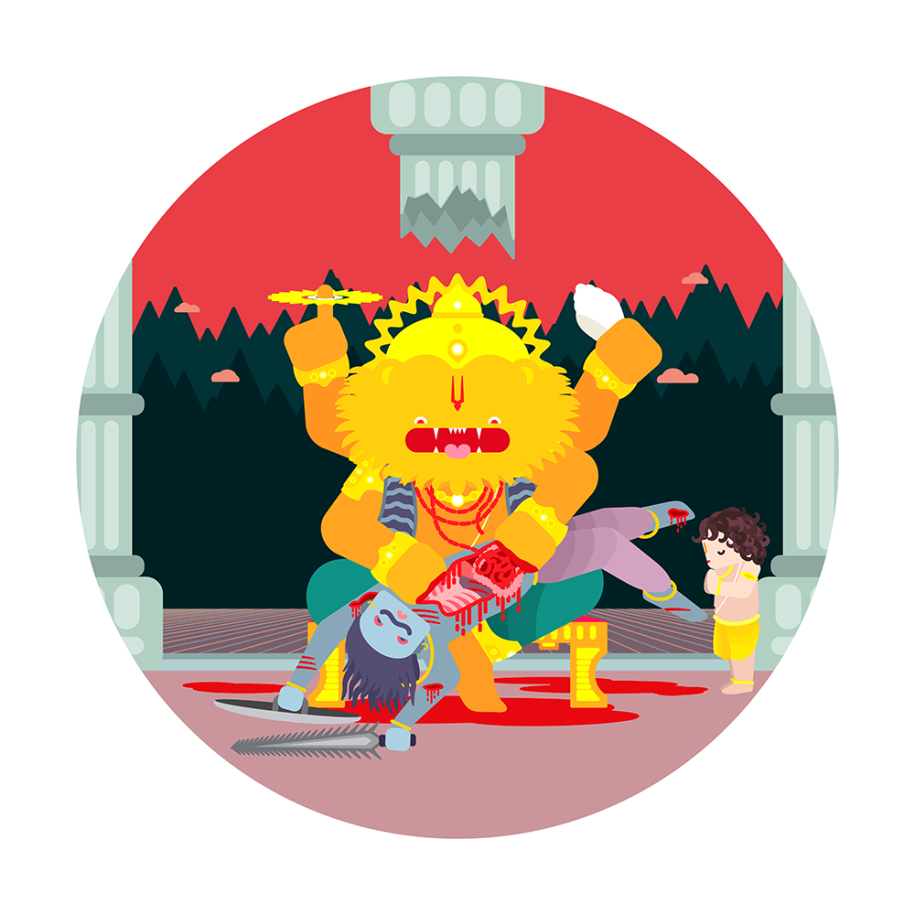 Although there is no Sanskrit title, this event is the ‘Killing of Hiranyakashipu’.Nrusinh, the half lion-man deity bursts out through a pillar killing the demon king Hiranyakashipu by tearing his guts and adorning his own neck with the demon’s intestines. Nrusinh is said to have come to the rescue of his boy devotee, Pralhad who was about to be killed by his own father, Hiranyakashipu.While Hiranyakashipu represents immorality, atheism or even misotheism arising out of a human ignorance, Pralhad represents that inner unshaken innocent faith in the Almighty. Nrusinh, an avatar (manifestation) of Lord Vishnu, the sustainer of the universe, represents the emerging of divine energy from the spinal channel and destroying the impurities of the gut that harbour ignorance. 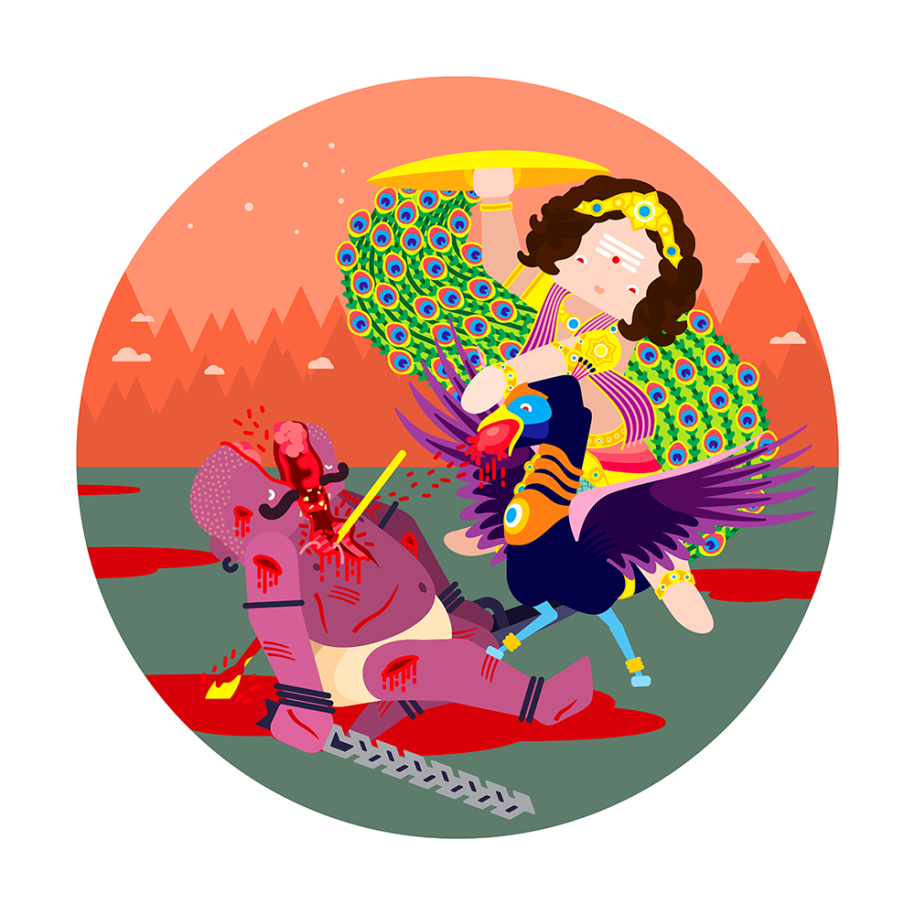 The event is called Tarkasur Vadh (Annihilation of Tarkasur).Skand, the boy warlord, riding on his divine peacock mount, slaughters the demon king Tarakasur.Skand, also known as Kartikeya or Murugan in popular culture, is the Lord of war and governs the planet of war, Mars. He is nurtured by the Pleiades star cluster. He is the boy child of Shiv and Parvati and brother to Ganpati. Shiv and Parvati create Skand through their fireball energy so that he can kill the invincible Tarakasur. Skand throwns his spear, the Vel, and tears the demon in half.Skand, the divine energy of the solar plexus when unleashed, destroys Tarakasur, the ego. 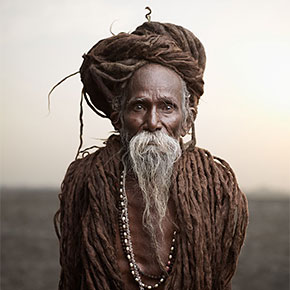