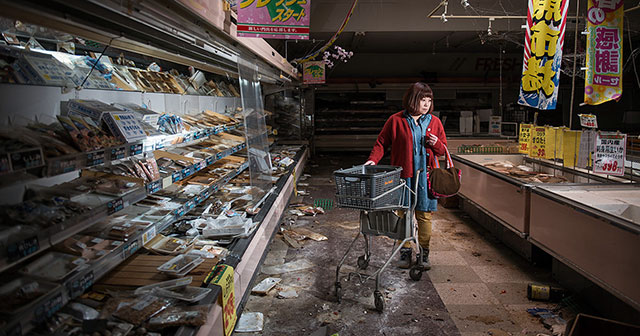 Victims Of Fukushima’s Nuclear Disaster Return To Their Abandoned Homes

A couple of events in the 21st century resonated through the whole world. The nuclear disaster in Fukushima was one of them. Five years later and the place is still a ghost town, a single moment suspended in time like the hands of a broken watch. Recently some former residents returned to relive this moment for an eerie photoshoot.

That is what photography project “Retracing Our Steps,” by French photographers Carlos Ayesta and Guillaume Bression is all about. They asked some of the 80,000 nuclear refugees forced to evacuate areas near Fukushima to return to the places they once knew. These photos are the fruits of almost 4 years of tracking down the now displaced residents and getting the permits to actually take them there.

“We asked former residents or inhabitants from the Fukushima region, and in some cases, the actual owners of certain properties, to join us inside the no-go zone and open the doors to these ordinary, but now unfriendly, places,” says the artists’ statement. “Facing the camera, they were asked to act as normally as possible – as if nothing had happened. The idea behind these almost surreal photographs was to combine the banal and the unusual. The fact of the historical nuclear accident gives these images a real plausibility.” 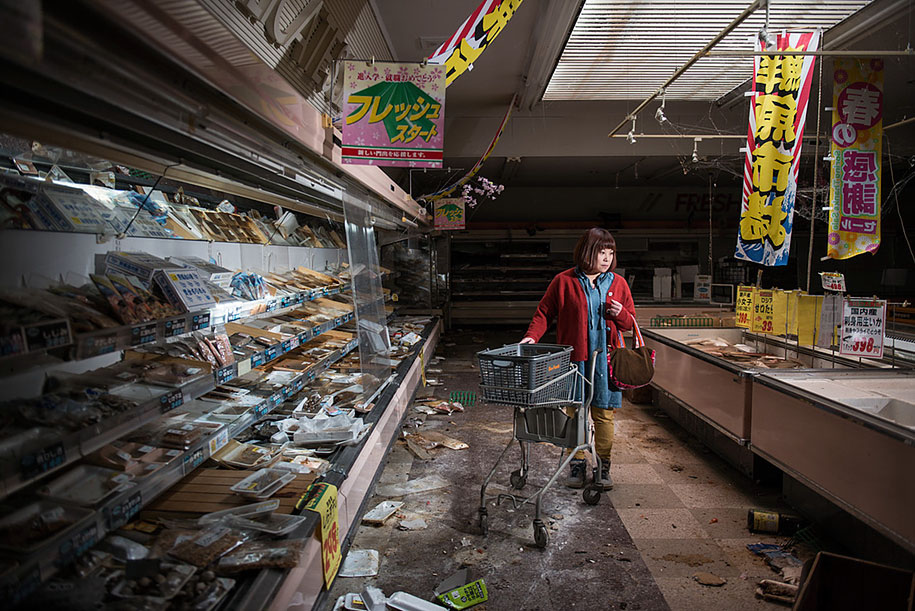 “Midori Ito is in an abandoned supermarket in Namie. Here, nothing has changed since the disaster. On a panel, you can even read the words “Fresh produce” in Japanese. Just after the disaster, Midori Ito evacuated to Minami Aizu because of health risks associated with radioactivity. She finally returned to live with her children in the city of Koriyama, situated about 60 km from the plant.” 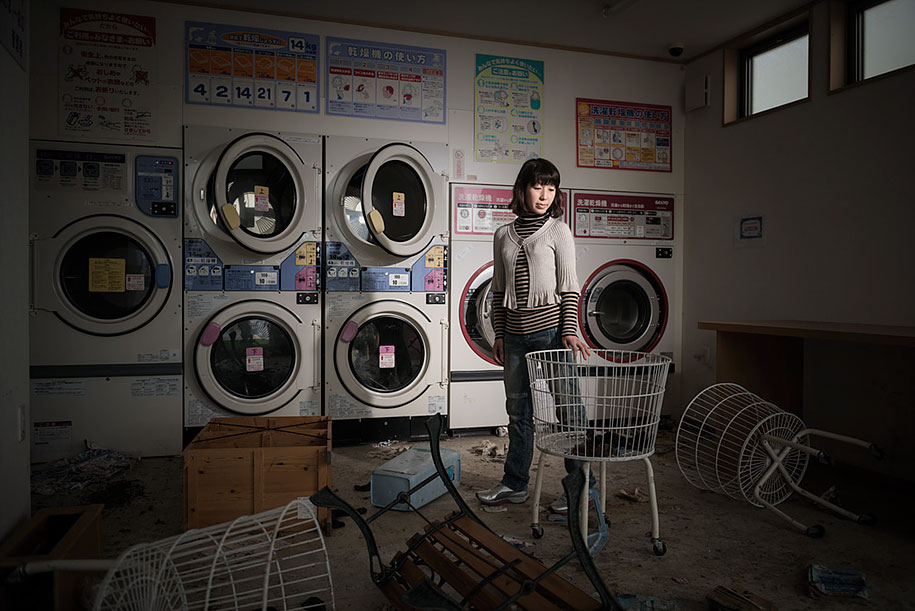 “Rieko Matsumotoest is in a laundry Namie. She is a nutritionist and counselor. ‘The day of the earthquake, I was working with a Philippine client who was there for his first time. I was ready to measure parts of her body, and she was about to take off her clothes when the ground started shaking. She spoke to me in Japanese up until that very moment, but when it hit, she suddenly started shouting in English.'” 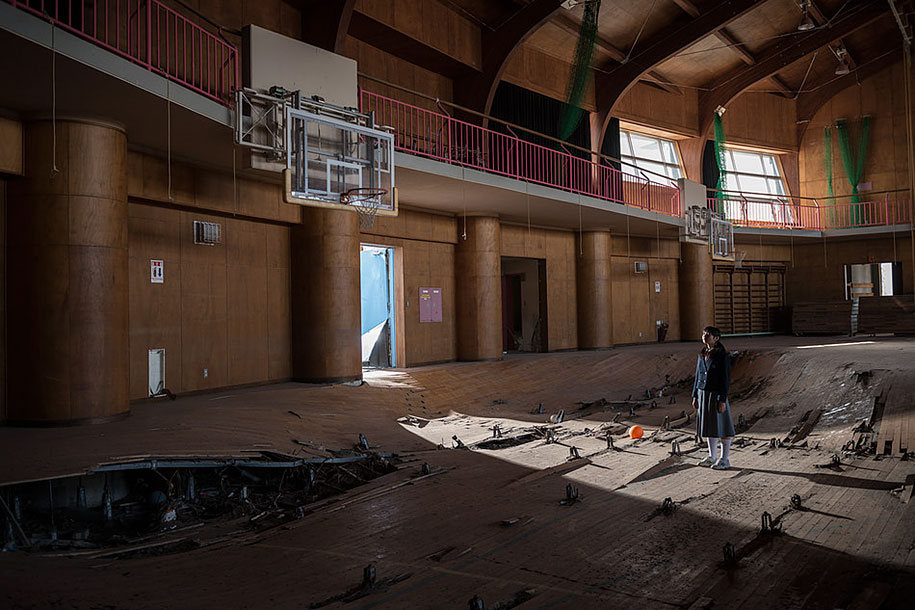 “Kanoko Sato is in a gymnasium of a school in the Ukedo district, destroyed by the tsunami and left like this since the disaster. ‘If it was not for this project, I would never have seen this forbidden zone with my own eyes. Even though I live in Koriyama and that is close enough, I did not know how badly this place was devastated until today'” 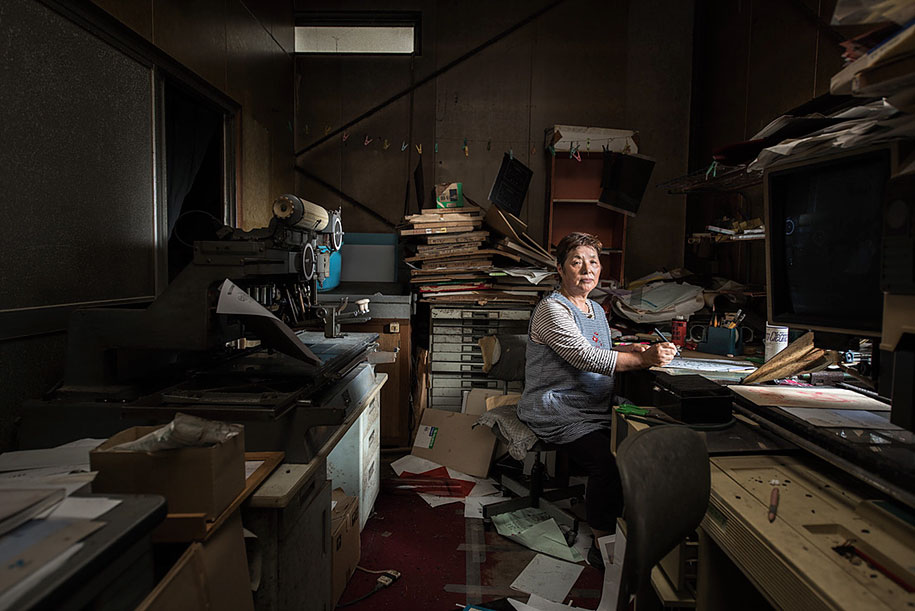 “Shigeko Watanabe ran a small printing company in the city center of Namie. She will never reopen her business. ‘I personally think that decontamination is meaningless because no one will come back here anyway. Only the men say they will return but us women are stronger than them and manage to face the truth head-on. The government strongly urges us to prepare to return, but to me, the town of Namie will be destroyed.'” 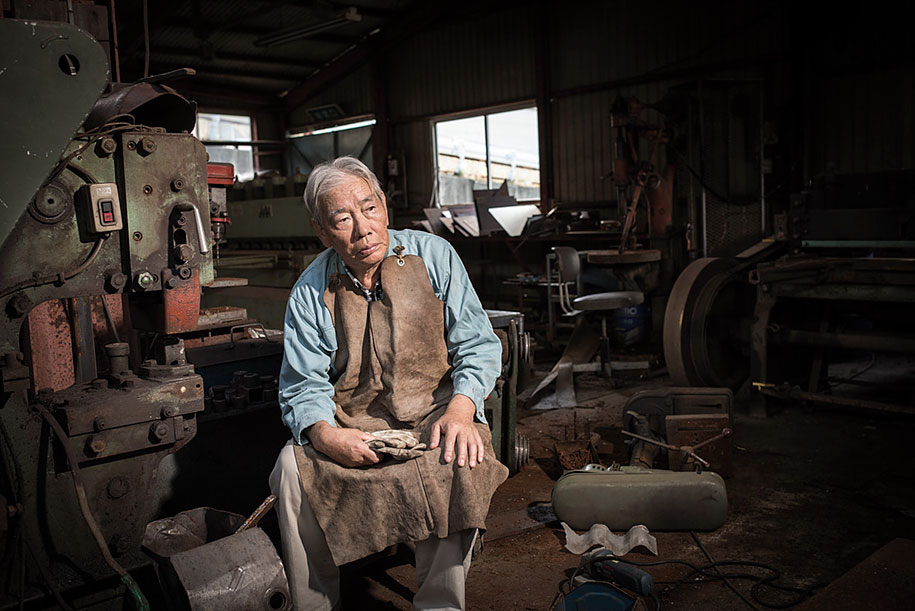 “Katsuyuki Yashima is sitting in his own workshop. At the time of the accident, he and his wife employed 15 people. His company will not reopen, and he does not think they will go back to live in Namie even after the city reopened. ‘I will not go back because I can not restart my business. In 10 years, Namie will be a ghost town. According to a survey, only 20% of the inhabitants of Namie want to come back. Gradually, as the years pass, people will rebuild their lives elsewhere, and in the end, no one will return.” Katsuyuki Yashima lives in Iwaki city, where the level of radioactivity is very low.'” 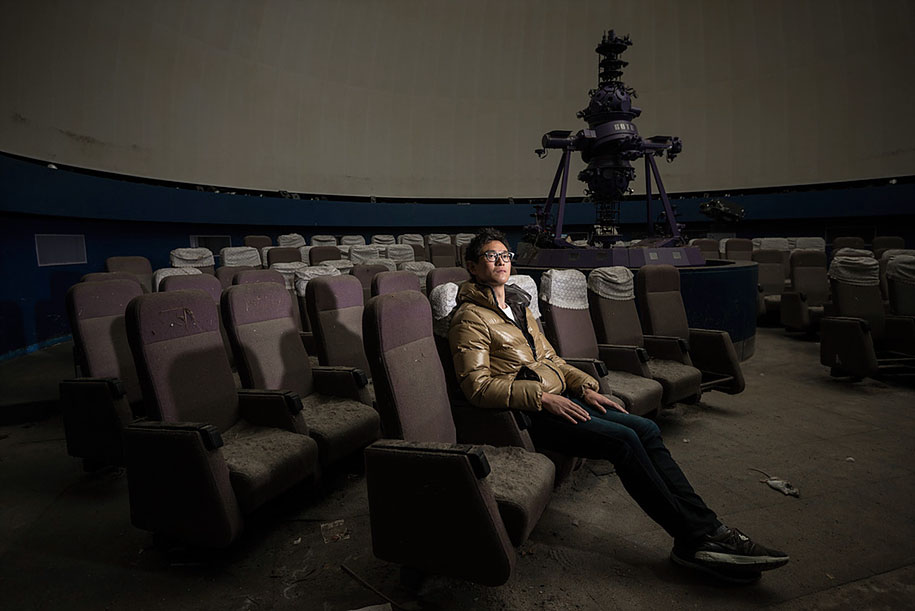 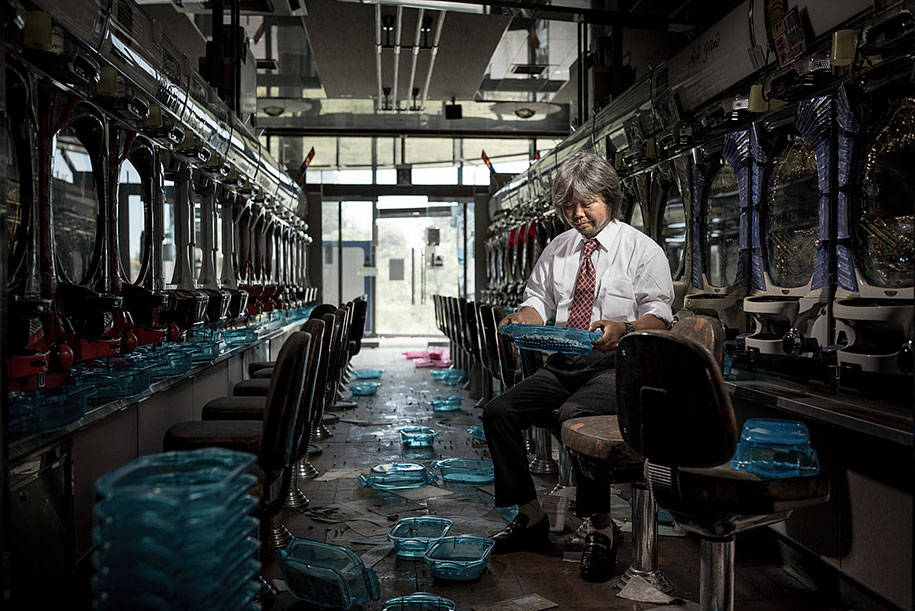 “Yasushi Ishizuka is in a Japanese playroom in Tomioka city. The building was heavily affected by the earthquake and has remained abandoned since the disaster.” 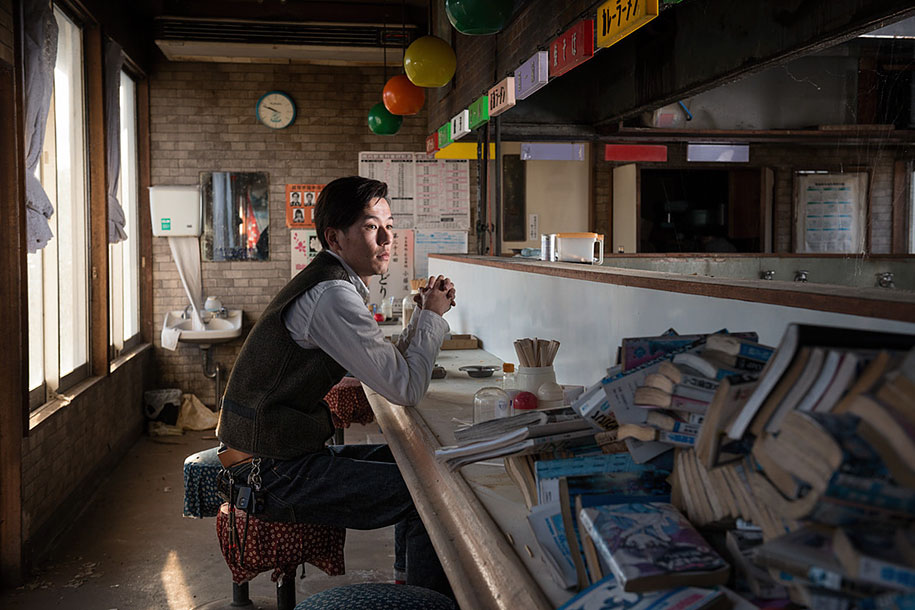 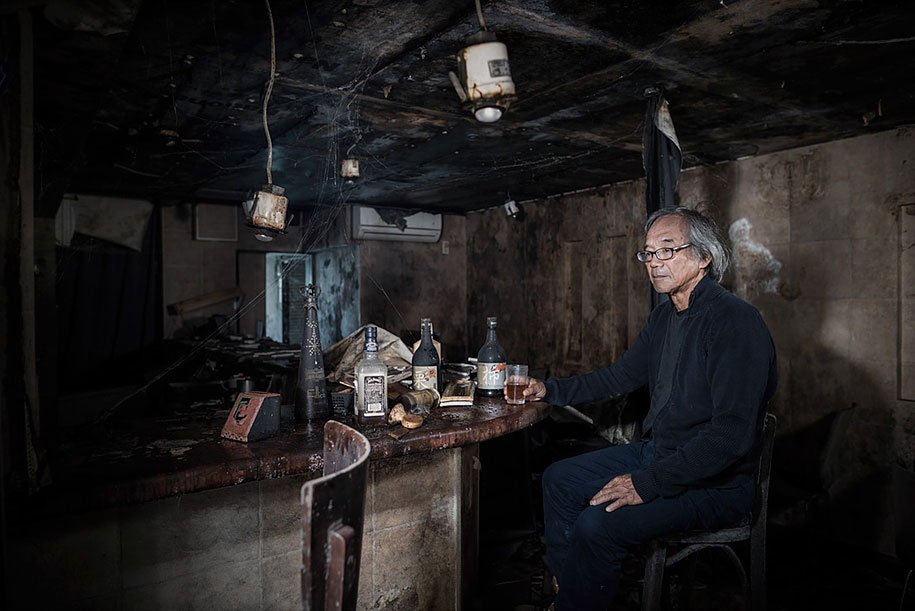 “Setsuro Ito is a vet. He takes care of animals, especially cows living in the prohibited zone. Here, he is sitting in a bar. He left Japan to live in Brazil when he was 30 years old, but after March 11, he decided to return to his country to help farmers in the exclusion zone who decided not to slaughter their livestock. He now lives in Fukushima city.” 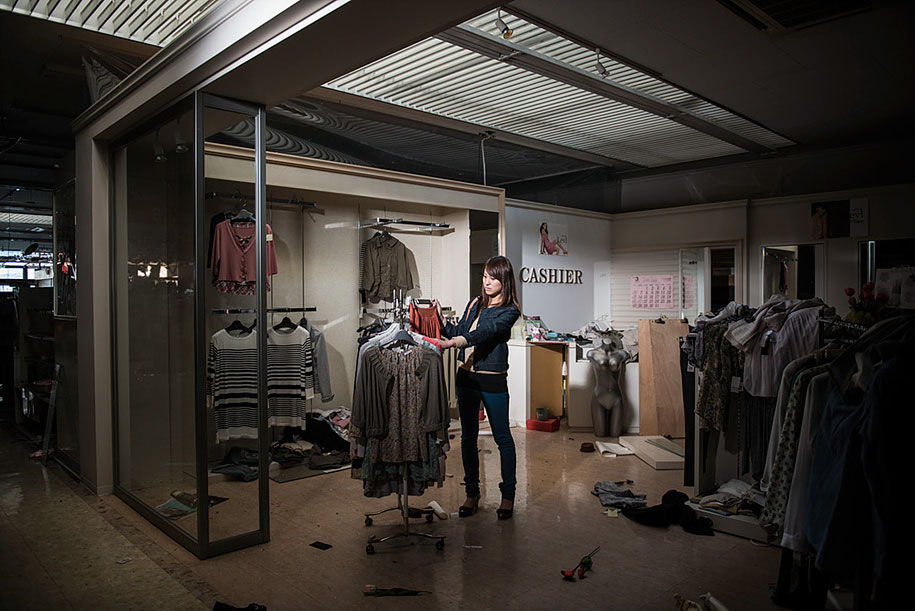 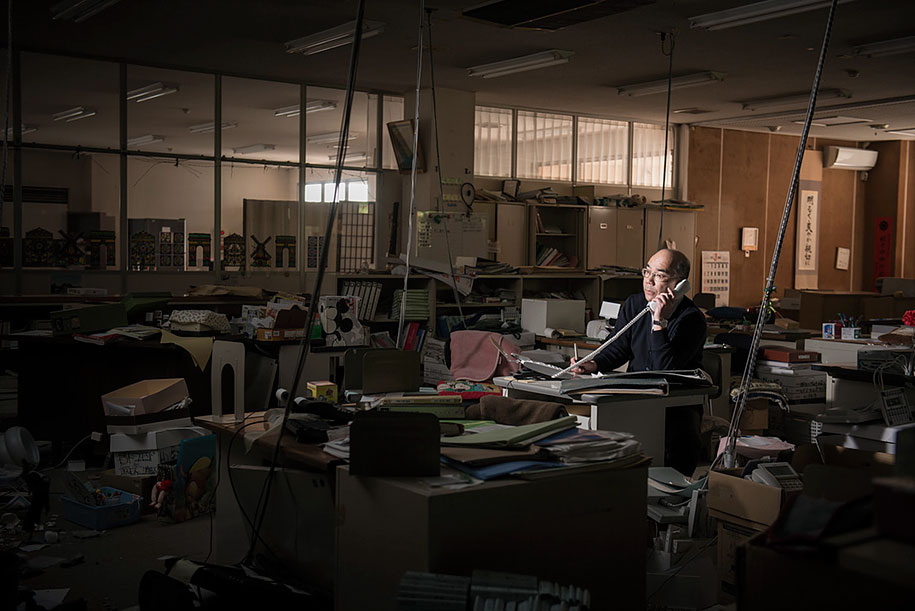 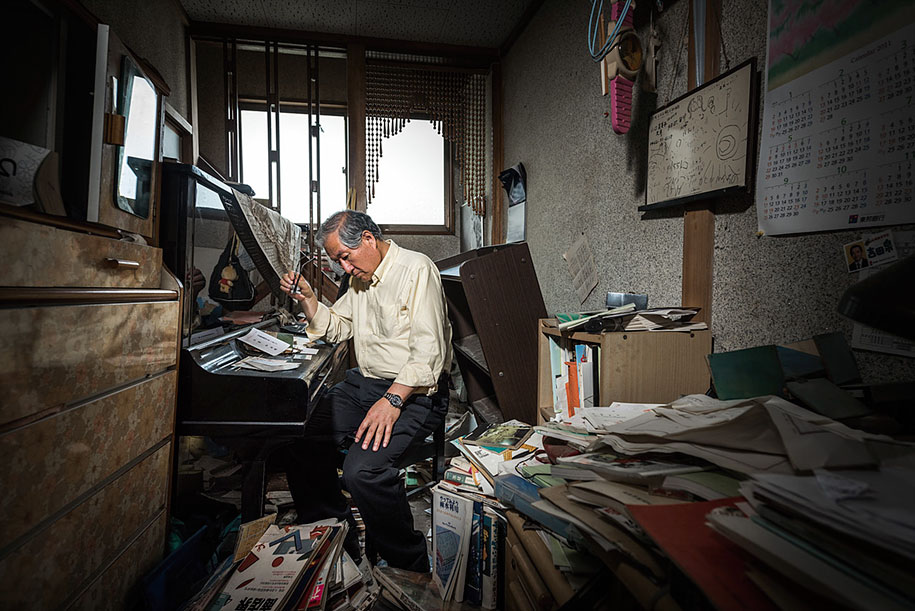 “Kazuhiro Onuki is in his old house in Tomioka. Before the accident, he managed bookstore and also had a Japanese ceramics shop. He got robbed several times as a result of the accident, and all the valuable pieces disappeared. We wanted to photograph him in his house. This room pretty much captures the atmosphere of his abandoned house today. Kazuhiro Onuki evacuated into the Tokyo area with his wife and daughter. He regularly participates in conferences where he is invited to talk about his experience of the nuclear disaster. Even if he returns occasionally to clean his house, he will not return here to live.” 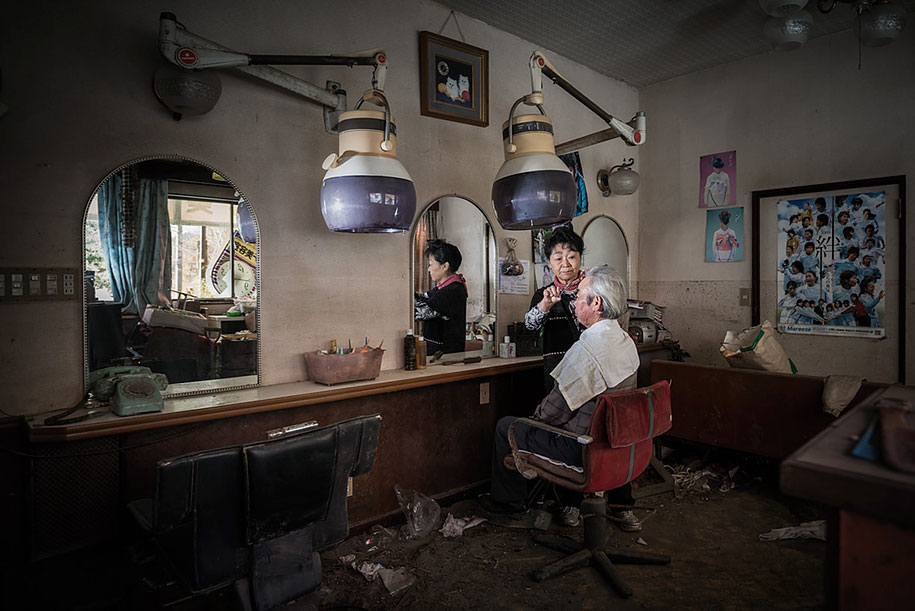 “Hidemasa and Michiko Otaki are in their old air dresser shop in Tomioka, a town hit hard by the tsunami and evacuated following the nuclear accident. She practiced this profession for 40 years. “I had just finished a cut when the earthquake took place. After the accident, we moved from shelter to shelter, I started cutting hair for the other refugees. One day, I was talking with another refugee, and she told me that a house was free 40 km south of the plant. This is where I have lived for over 2 years now.” 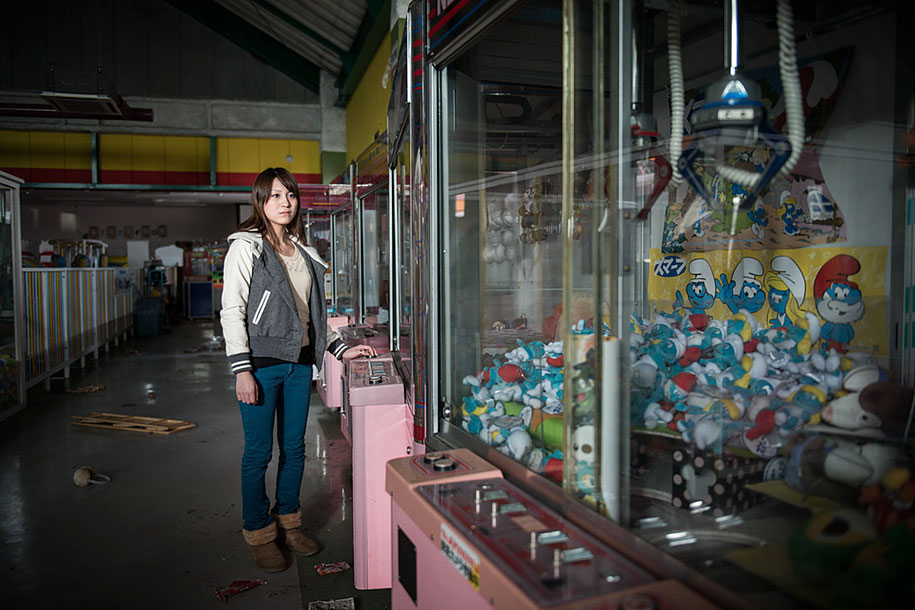 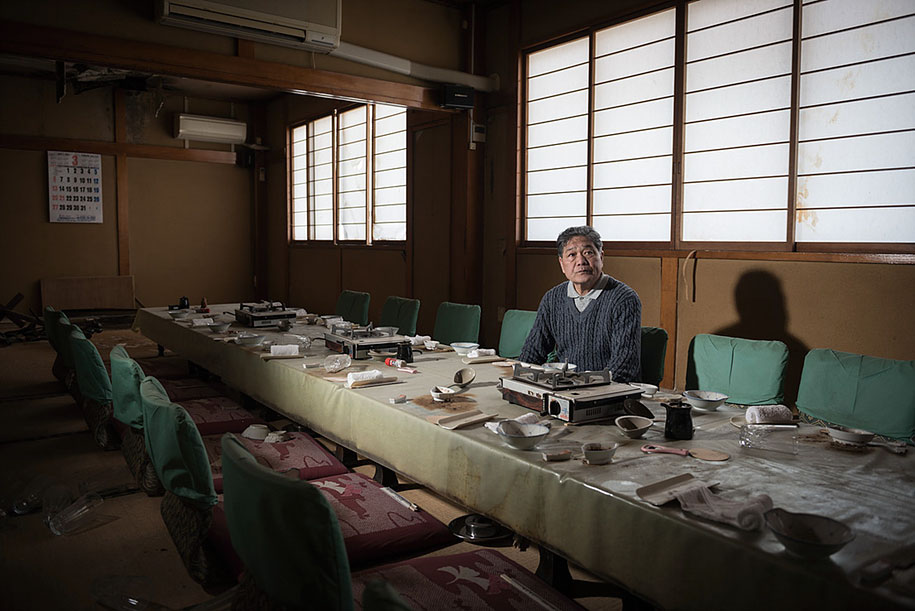 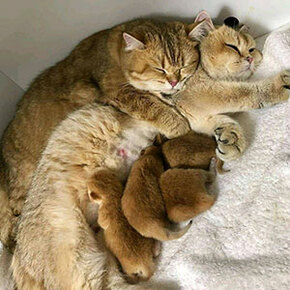 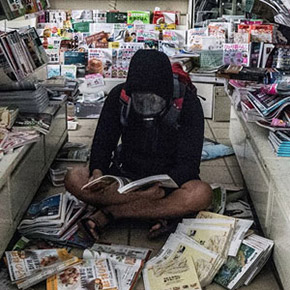 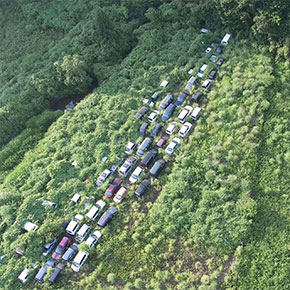 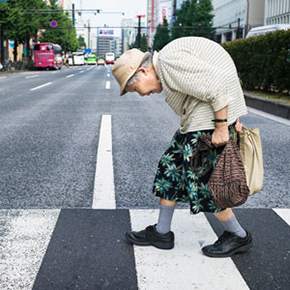 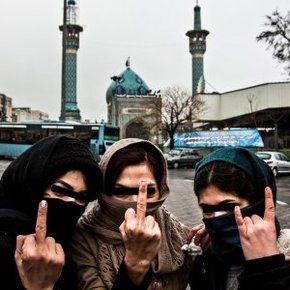 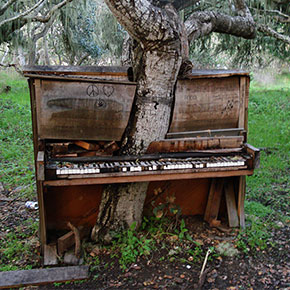