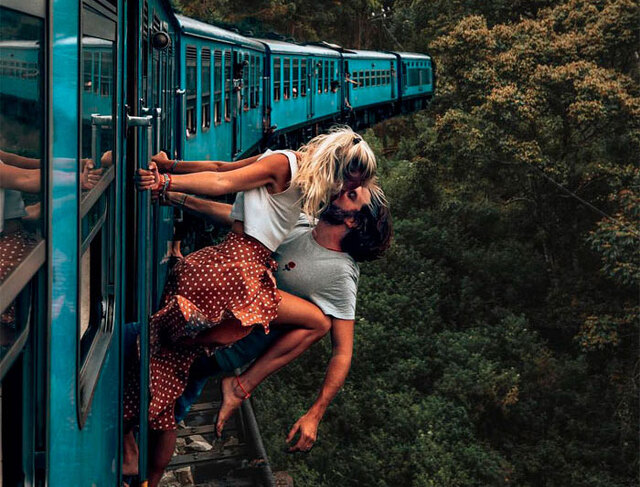 Being an influencer seems to be the go-to “profession” for young people with good looks and no skills – unless you call shamelessness and ignorance skills. Some people are getting fed up with the influencers’ selfish behavior and are publicly calling them out, hoping for everyone to see how foolishly ignorant they can be.

From yoga poses at the Holocaust Memorial site, to risking their lives by hanging out of a moving train, check out the most ignorant and reckless stuff influencers have been publicly shamed for in the gallery below!

#1 When You Come To Auschwitz Museum Remember You Are At The Site Where Over 1 Million People Were Killed. Respect Their Memory. There Are Better Places To Learn How To Walk On A Balance Beam Than The Site Which Symbolizes Deportation Of Hundreds Of Thousands To Their Deaths

The Auschwitz Memorial is a place where people go to learn the tragic history and pay their respects to the victims of the Holocaust. Obviously, it’s not a place for selfies – but some influencers clearly did not get the memo.

#2 Instagram Model Compares Her Life To Rice Workers, Gets Called Out For Being Insensitive

Not that long ago, Instagram influencer Natalie Schlater posted this picture with a caption reading “Thinking about how different my life is from the man picking in the rice field every morning.” This not-so-humble comparison did not fly well with her followers and people online, many of them calling her an entitled bigot. Natalie tried defending herself saying all of this was a misunderstanding but not many people bought it. 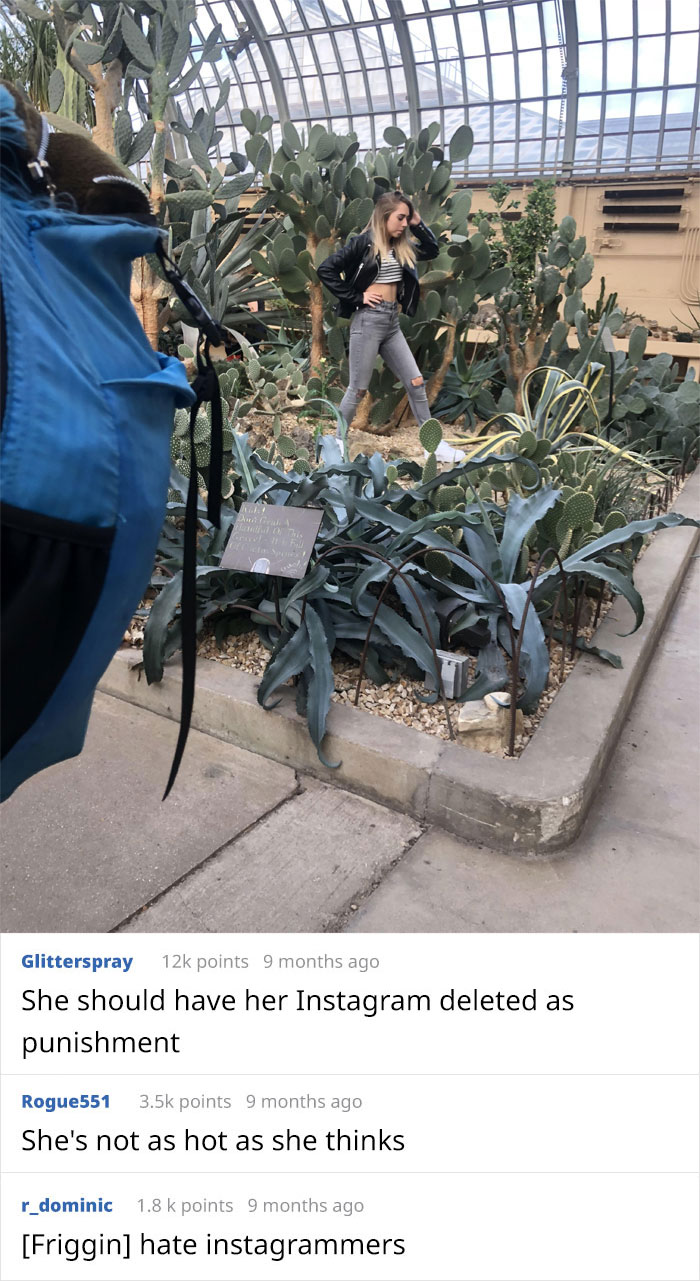 Imagine being so stubborn and ignorant that you think it’s okay to step on plants even when the staff is asking you not to. “She was asked by multiple people to stop and ignored everyone,” said the Reddit user that uploaded the pic. “Security eventually came and escorted her and her photographer out of the building. Both were asked to not return.” 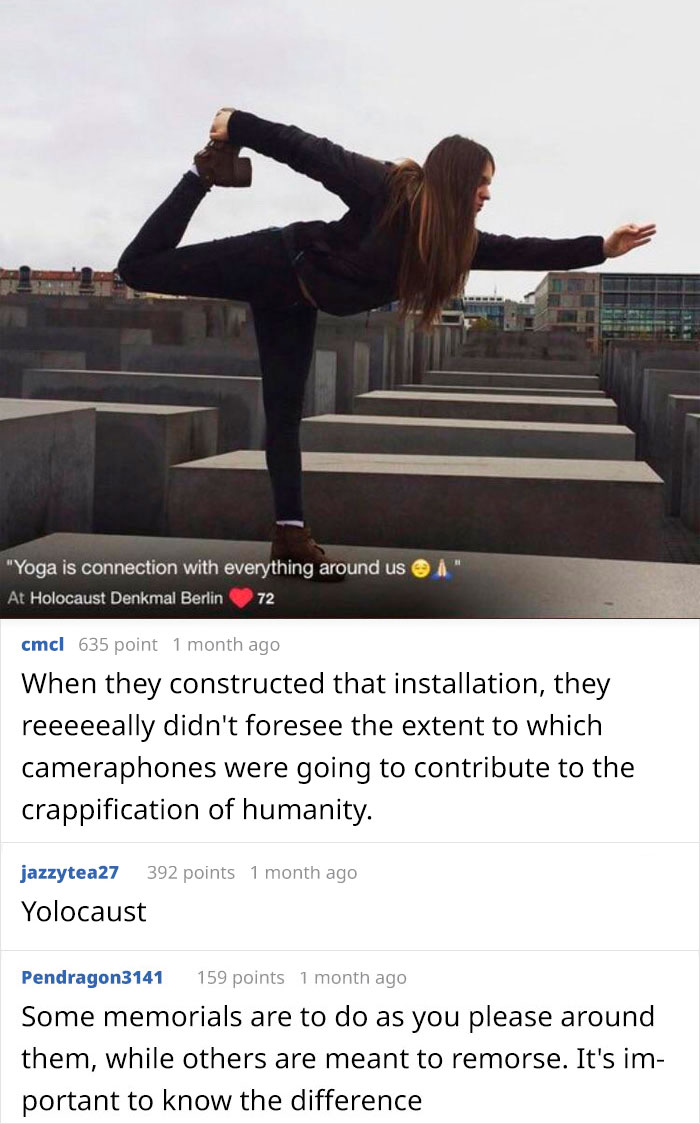 Much like the Auschwitz Memorial site, the Holocaust memorial in Berlin is also a place where you should show respect and not do yoga poses. This kind of disrespectful behavior even inspired Israeli artist Shahak Shapira to start his “Yolocaust” series where he publicly shames selfie-takers on the memorial site. 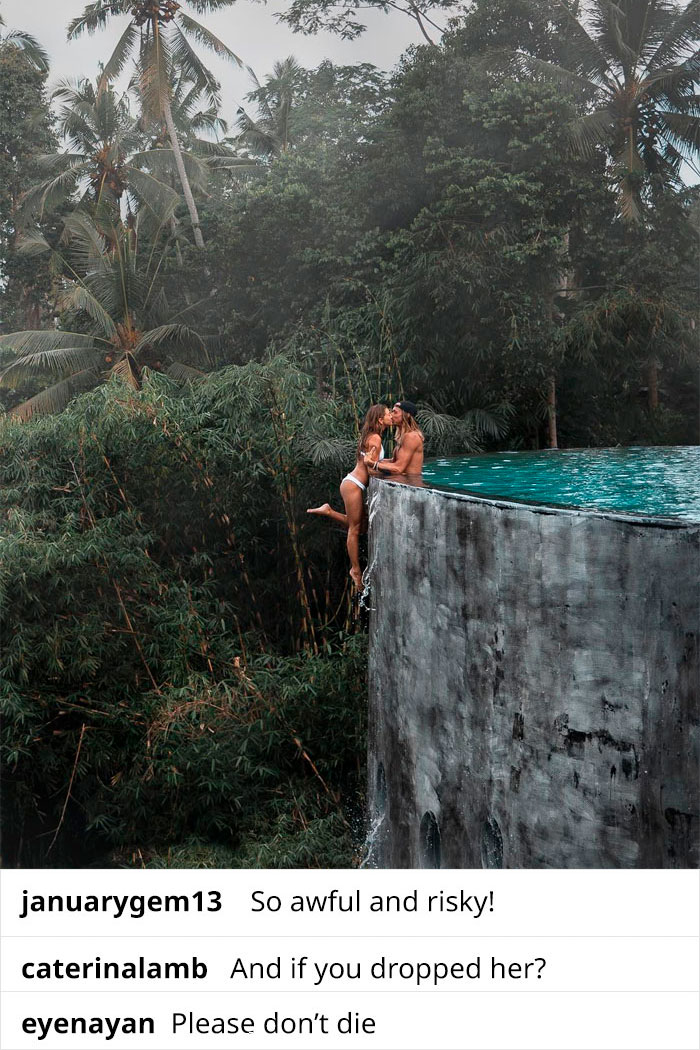 A photograph uploaded by influencers Kelly and Kody has recently stirred up a storm online for how dangerous it was. It shows Kody holding Kelly from the side of an infinity pool above a steep cliff. The influencers say this symbolizes strength and trust but honestly it looks like stupidity and recklessness.

#6 This Vigilante Shames Influencers For Bad Behavior In National Parks

Our Public Lands Hate You is an Instagram account dedicated to publicly shaming influencers who act irresponsibly on US public lands. This has already led to some of them losing sponsorships and being investigated by the National Park Service.

In an interview with Bored Panda, Steve, the man behind the account said he started it after going hiking in Idaho. He noticed people disrespecting nature, camping where they weren’t allowed and leaving unattended campfires. “After seeing the results of that disrespectful behavior, I decided to create an IG account to share the damage that I was seeing and vent my frustration in the hopes of bringing awareness to the issue and getting people to be more aware of the impact of their actions,” said Steve.

The man believes that instead of influencing people toward good behavior, the influencers are only thinking about making money. “Anything relating good stewardship of the land they are using to create their content appears to have become an afterthought for the vast majority of influencers,” says Steve. “I also think that many influencers believe the rules don’t apply to them for some reason.”

Steve says the Our Public Lands Hate You account has two goals: “First, we provide educational content using good and bad examples to SHOW people how to become between stewards of their public lands and provide visuals about what good behavior and harmful behavior looks like. Second, we reshare harmful and illegal content, primarily from large influencer accounts, that is publicly posted to social media so that that everyone can see what these influencers are promoting, and leave respectful, educational comments if they see fit.” He believes that if influencers are not able to take responsibility for their actions, the owners of the land should have a right to voice their opinions.

#7 Instagrammer Called Out For Faking Her Trip To Paris

What do you do when you can’t afford that expensive European trip to Paris? You fake it, duh. Just ask Swedish influencer Johanna Olsson who was recently outed for faking pictures of her supposed trip to Paris. She even doubled down and tried to explained why the pictures look like that but only ended up looking even more ridiculous: “I wanted to talk a little bit about the pictures I posted in Paris. So, I did one picture, shot it and didn’t think it looked that nice… so I took a different background and put the background into it.” Riiiiiight.

“And when I put it up nobody noticed so I thought, this is good. So I admit it wasn’t my finest Photoshop skills. Now in Sweden this thing has gone crazy and TV shows want me to come on and talk about my ‘fake travelling’,” said Johanna. “It’s a bit ridiculous I think. There are a lot of influencers out there that use Photoshop in birds, rainbows or crazy skies and I could do that but I don’t like that. I just wanted to make that clear that I was in Paris, but I did Photoshop the background, but I’m not going to take them down because it’s a collaboration and they’re nice pictures – it’s a good outfit!” 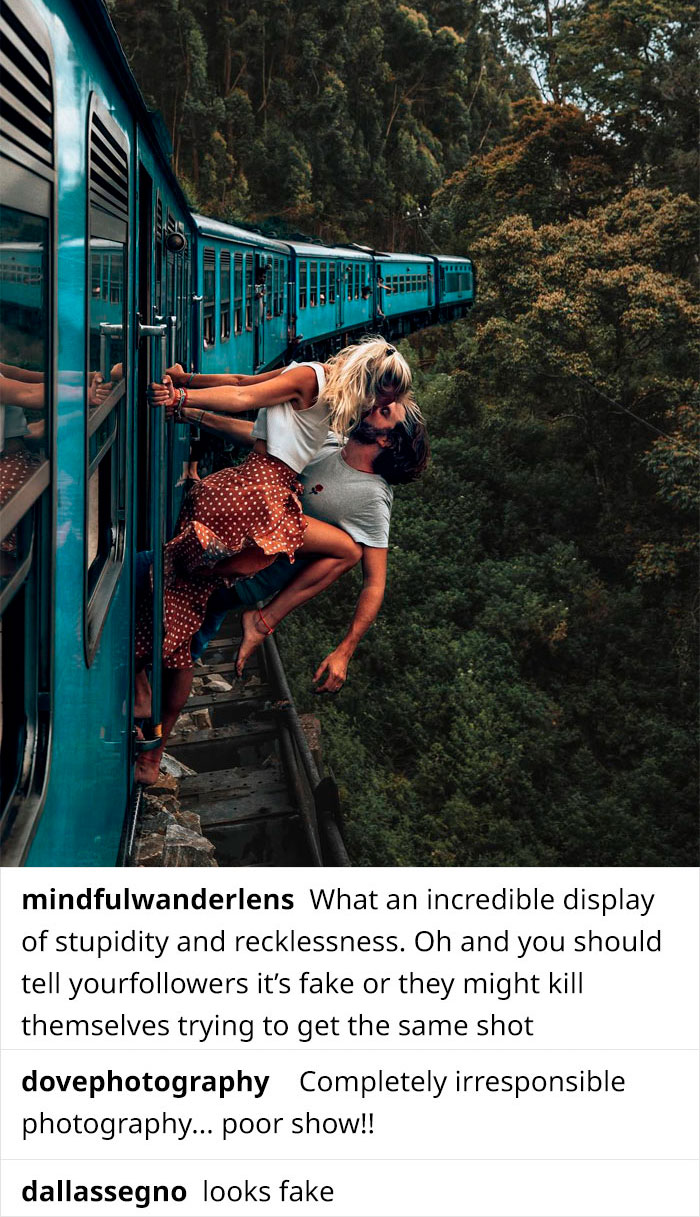 Much like Kelly and Kody, this Belgian influencer couple also tried something ridiculously reckless and ended up receiving lots of negative backlash. The couple in question, Camille and Jean, going by ‘backpackdiariez’ on Instagram, uploaded themselves kissing while hanging out the door of a moving train in Sri Lanka. Beautiful? Kinda. Stupid? Definitely.

#9 Hbo ‘Chernobyl’ Creator Calls Out Influencers After These Pictures

Just like the Auschwitz Memorial site, Pripyat is also a place of tragedy on not just a backdrop for your “influential” photos. Sadly, some instagrammers can’t get the grasp of it, even leading to the creator of the “Chernobyl” miniseries issuing a public statement.

“My thoughts and prayers go out to all the victims of the Malibu wildfires,” says the influencer as they’re uploading a picture of themselves laying on the beach in a bikini.

If you can fake a whole trip to Paris, faking your eye-color doesn’t sound like that big of a deal – unless you get exposed by your actual father. That is what happened to influencer Sarah McDaniel who tried to fake Heterochromia – a condition where a person’s eyes are of different colors.

The model was exposed by Celebface, a famous celebrity exposer: “Expectation: A poor girl with different-colored eyes. Reality: An ordinary liar who had eye color surgery and tells everyone about her ‘real’ heterochromia now.”

Nice one – all that she’s missing is a Monster Energy drink snapback and a barbwire tattoo to complete the look. 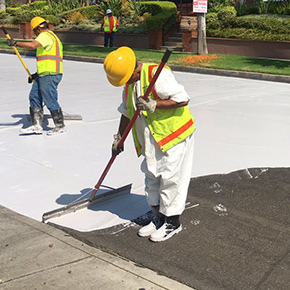 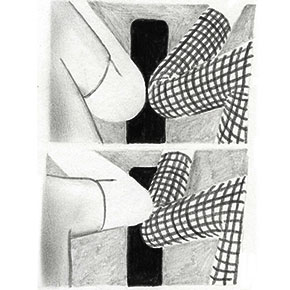 Guy Hilariously Illustrates His Flight From New York To Berlin 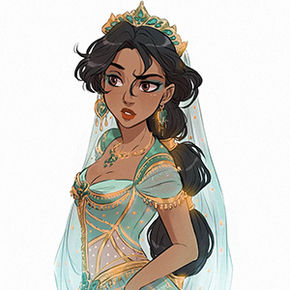 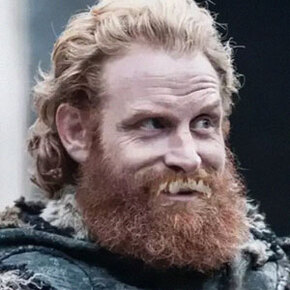 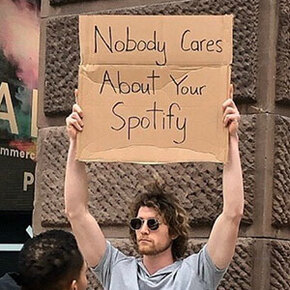 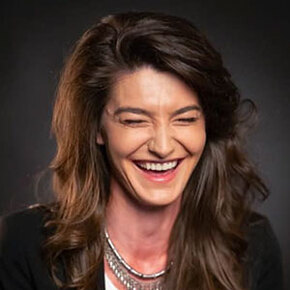 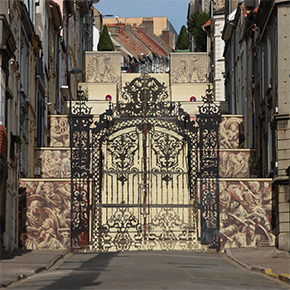 This Majestic Metal Gate Is Actually A Clever Optical Illusion 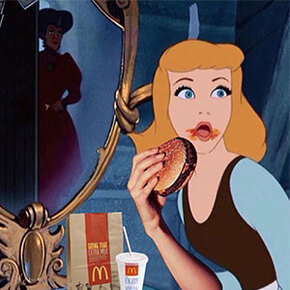 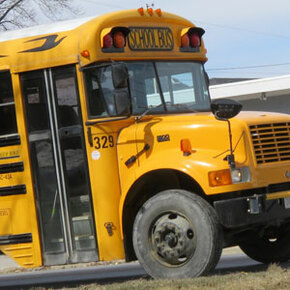 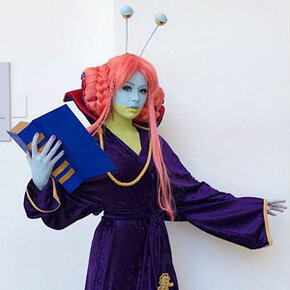